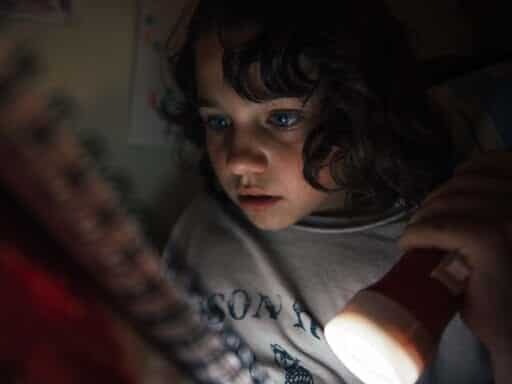 Beasts of the Southern Wild director Benh Zeitlin returns with an intriguing but muddled take on the old legend.

There’s a thin line between the mawkish and the merely sentimental, and Wendy, Benh Zeitlin’s riff on the Peter Pan myth, rides it with unnerving abandon. Whether that’s a strike against it or a tick mark in its favor is mostly in the eye of the beholder, since the Peter Pan narrative about children who yearn to never grow up is nostalgic by definition. It’s a story written by adults for children who don’t yet know what it’s really about.

The story has been a much-revisited touchpoint for Hollywood almost since the start, beginning with the silent version released by Paramount Pictures in 1924. Since then, it’s been tackled comedically (1991’s Hook), fantastically (2015’s Pan), dramatically (2004’s Finding Neverland), vapidly (2003’s Peter Pan), sweetly (many animated Disney permutations, beginning in 1953), and even as gritty horror (1987’s Lost Boys).

Wendy’s take is a mix of naturalism and expressionist fantasy, shot with a naturalism that almost suggests it’s a documentary about the “true” story behind the legend of Peter Pan (that also happens to include some magical elements). On a number of occasions, the film veers close to succeeding. At times it’s evocative and touching. But it’s also heaped high with ideas about the magic of stories and the importance of recapturing your sense of wonder, which don’t really add up to much in the end.

Zeitlin, who burst onto the Hollywood scene in 2012 with his feature debut Beasts of the Southern Wild, co-wrote the screenplay for Wendy with his sister, Eliza. That sibling relationship seems to influence the plot, which — rather than revolving around Peter — centers on Wendy Darling (Devin France), a spirited young girl who lives with her twin brothers Douglas and James (Gage and Gavin Naquin) in the apartment above a greasy spoon run by their hard-working and jovial mother (Shay Walker). The establishment sits just beside the train tracks, and its patrons are grizzled regulars who seem as though they’ve been there forever and always will be, drinking coffee and cracking jokes and watching the kids run around.

It isn’t a bad life, but it is a bit of a trapped one, something the school-aged Wendy, Douglas, and James can sense. Their mother tells them she once had huge dreams (of joining the rodeo) but gave them up once she had kids, and that now she dreams of just making ends meet. She doesn’t seem sad about settling, but her kids find it unnerving. One day, they make a spur-of-the-moment decision to jump onto a passing train. It’s there they meet Peter (Yashua Mack), who takes them to his magical island.

This is where things go from realist to fantasy, because on that island, children roam free, unhindered by rules and bedtimes and adult supervision. And somehow, they never grow up. Watched over by a giant underwater creature they call “the Mother,” they live a carefree life. But there is a darker side to the island too, the children discover — one where bitterness and scarcity has replaced bounty and freedom and joy.

Wendy doesn’t quite work, but it harbors the nugget of possibility

Zeitlin has clearly taken a lot of care with Wendy, working with his child actors (mostly non-professionals) in a seemingly improvisational manner and building their world through expressionistic means. You feel their wonder at their new home, which is both wild and comforting, thanks to whirling sunlit sequences and a lush, exciting score (composed by Zeitlin and Dan Romer). At best, it feels like the filmmaking choices are strokes of paint building a swirling story.

But there’s voiceover, too, which is often a choice that indicates a lack of trust in the audience’s ability to go with the story. And though it’s performed by an older Wendy dreamily recounting the experience from a distance of years, it feels both too explanatory and strangely obfuscating. I found myself thinking Wendy needed either a tad more plot or far less; instead it floats in an unhappy medium space.

Which is a bit of a shame. The core concept of Wendy, in which Wendy isn’t Peter’s devoted follower so much as his headstrong, courageous challenger, is a good one; the movie doesn’t do much with it. Its endless valorization of child-like imagination comes off a bit soft and pointless. Disney movies have been beating that drum for a long time, and it’s now more clichéd than fresh. There’s a kernel of commentary about the exploitation of the world’s wonders buried in the tale — the repeated yearning for one’s “mother” works just as well as a metaphor for nature as it does for actual mothers — but it feels like while the idea was there, the filmmakers couldn’t quite pull off the analogy in the edit room. Instead, it all gets a little muddled.

Yet on the strengths of its images and its child actors’ performances (particularly France’s), there’s something charming and yearning about Wendy. The film also proves there’s still some life left in the much-told Peter Pan tale. If the magic isn’t totally there in Wendy, it’s floating around the edges, ready to spark another generation’s imaginations.

Wendy opens in theaters on February 28.

Biden’s latest executive action is a win for chickens and meatpacking workers
Russia detained an American for espionage. Here’s what we know.
Americans tend to see disease as a personal failure. That’s a terrible way of thinking about it.
Trump used the RNC to gaslight America on Covid-19
Trump’s SCOTUS choices are religious liberty advocates. Here’s what that means.
The Catch-22 for labor unions enjoying newfound public support