WeWork is being sued for allegedly enabling sexual harassment 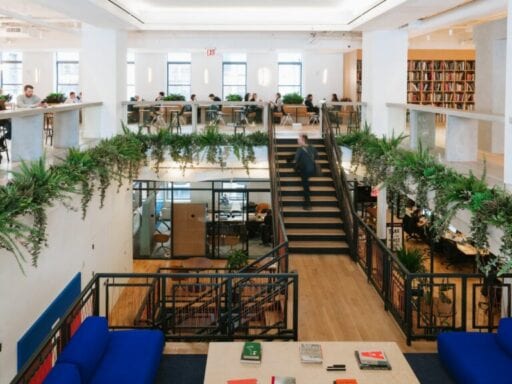 A new lawsuit claims the company spent more on parties than on sexual harassment training.

A former WeWork employee says she was sexually assaulted at company events and that WeWork’s failure to intervene or hold her assailants accountable is emblematic of an “entitled, frat-boy culture that permeates [it] from the top down,” according to a new lawsuit.

WeWork, a co-working company founded in 2010, has more than 2,000 employees and is reportedly valued at $20 billion. The company has offices in 90 cities around the world, and it has grown so rapidly since its founding that it is now the biggest office tenant in New York City.

The complaint, which was filed on Thursday in the Manhattan Supreme Court, details former employee Ruby Anaya’s allegations against the company. Anaya, who began working at WeWork in 2014, says she was groped by two different employees at two company-wide events where attendance was mandatory and alcohol was readily available. Anaya “immediately reported each incident in detail to Human Resources” and had her complaints dismissed on both occasions, she claims.

The first alleged incident occurred in August 2017 at an annual company event called Summer Camp; on Facebook, the company described Summer Camp as a “festival-esque getaway” for employees and their guests. Anaya claims that a male co-worker “grabbed [her] from behind in a sexual manner,” and that when that employee was questioned by human resources, he said he didn’t remember the event because he was “black-out drunk.”

The suit claims WeWork didn’t reprimand the employee beyond requiring him to take a sexual harassment prevention course, and that he is still employed at the company. (It’s unclear whether Anaya worked directly with that particular employee, as Summer Camp is open to WeWork employees across all departments.)

Anaya also says that a different male employee forcibly grabbed her during WeWork’s annual Summit event, held in January 2018 in New York City. Anaya says she was leaving the stage after presenting an award and stumbled after tripping over one of her heels; she says she put her hand on a colleague’s shoulder to steady herself. She then recounts in the complaint that the employee “grabbed her waist and pulled her body towards him,” then “forcibly kissed her, thrust his tongue into her mouth and refused to release her” until she slapped him. Anaya says she reported this incident to human resources and that she was told the employee had “no recollection” of the event and “would have remembered if he had been slapped.”

Anaya’s complaint claims that WeWork didn’t simply fail to take action against her alleged assailants — the company also retaliated against her for speaking out. She says supervisors began shutting her out of work projects before abruptly terminating her in August 2018. (An estimated 75 percent of workplace harassment victims have been retaliated against after speaking up, according to a 2003 study.)

Anaya was first hired as a project manager on what was then known as WeWork’s digital team. In 2017, she moved to the culture team and worked as a liaison between employees and management. The complaint against WeWork notes that she ran diversity focus groups, helped plan the Summit and Summer Camp events, and tried to get management to address the gender wage gap at the company. It also notes she received two raises and many accolades during her employment.

WeWork, for its part, says Anaya was fired because of poor performance. A company spokesperson sent the following statement to Vox:

These claims against WeWork are meritless and we will fight this lawsuit. WeWork has always been committed to fostering an inclusive, supportive, and safe workplace. WeWork investigated this employee’s complaints, took appropriate action, and this employee was terminated solely because of her poor performance. She received negative performance reviews, including one more than a year before she was terminated. She was rated as one of the lowest performers on her team, based on feedback from her peers and managers. Upon being terminated, she acknowledged her poor performance and that she hadn’t been showing up to work regularly. She even expressed concerns about her performance to a colleague shortly before her termination.

In an internal email sent to all WeWork employees and obtained by The Goods, the company’s co-founder Miguel McKelvey said Anaya’s allegations were false and described her as a bad employee. McKelvey also highlighted the company’s efforts to make all employees feel comfortable both on a daily basis and when expressing concerns about harassment:

I want each of you to hear from me directly: these claims are not true and we will fight this lawsuit. Ruby was an early employee at WeWork and many of us worked with her on various projects. She was let go because of poor performance. Ruby frequently neglected assignments, skipped meetings and didn’t show up for her team or for the company. There may be discussion in the media about what happened, but the truth is that Ruby wasn’t fulfilling her role as a WeWork employee. As her manager, I was responsible for listening to feedback and taking action. Any suggestion that her dismissal was anything other than performance based is simply not true.

One of the things that I am most proud of is the strong sense of community we all share as employees. Our teams work hard to create a safe space for all employees, where people can raise concerns without fear of retaliation knowing that situations will be handled appropriately. No matter how we grow as a company, we will continue to be there for one another. We will respect each other and our environment. We will show up for each other.

Anaya’s suit against WeWork, however, claims that the company retaliated against her for reporting the alleged assaults and attempted to frame her as an underperforming employee just weeks before her firing. She says that six weeks prior to her termination, a WeWork employee “surreptitiously photographed [her] having a glass of wine with another co-worker,” and later used that photo as evidence that Anaya was ducking her responsibilities and drinking on the job.

She further alleges that the wine issue was not brought up until the day she was fired — and that drinking wine with a co-worker wouldn’t have otherwise been a problem at WeWork, a company that “touts its free beer on tap” and spends more than $20 million each year on its Summit and Summer Camp events.

WeWork’s drinking culture was so pervasive and problematic, according to the suit, that one co-worker told Anaya it was “only a matter of time until someone gets raped” at a company event. A WeWork spokesperson declined to comment on the allegations Anaya made about having her photo taken or the company’s alcohol policy.

Anaya’s attorney, Seth Rafkin, told NBC New York that the company never brought up any performance issues. “We also note the obvious: If our client had been a poor performer for a year or more, why didn’t WeWork ever give her a warning or a performance plan, something human resources professionals will tell you is typical practice?” said Rafkin. “And why did the decision to fire her come only after she complained again about a sexual assault and the way it was handled?”