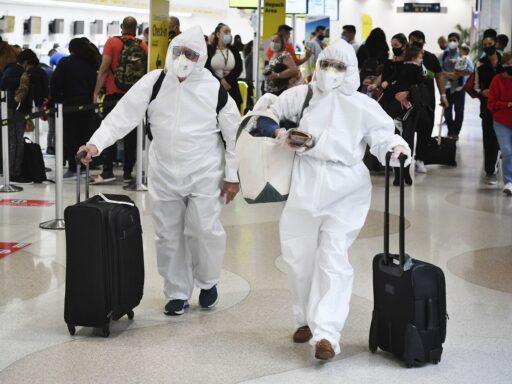 “Is flying safe?” is the wrong question.

As a doctor, one of the most common questions I’ve gotten throughout the pandemic is whether flying is “safe.”

The question has new urgency, with more contagious variants of Covid-19 spreading around the world, and with the new US policy, effective January 26, that requires all passengers flying into the country to test negative for Covid-19 within three days of their flight.

Psaki: “With the pandemic worsening & more contagious variants spreading, this is not the time to be lifting restrictions on intl travel… beginning tmrw intl travelers to the US must provide proof of a negative test within 3 days of travel to airlines prior to departure.” pic.twitter.com/r9mchHE6T9

The answer to whether flying is safe, as with most questions in this epidemic, is that it’s complicated.

Outbreaks of Covid-19 on flights have been documented multiple times since the start of the pandemic, albeit seemingly more so before masks were widely worn on planes. But one recent outbreak on a long-haul flight from Dubai to New Zealand highlights why flights can be anywhere from safe to unsafe depending on a number of factors. It’s also an example of why viral transmission is not so much a single event, but the result of multiple lapses in safety.

New genomic data from the flight outbreak this fall sheds light on exactly how complicated tracing the dynamics of transmission in any environment can be — even one as controlled as an international plane ride.

On an 18-hour flight from Dubai to New Zealand this past September, four passengers were infected by one other passenger who boarded the flight unaware that they were infected with Covid-19. Some have pointed to this outbreak as evidence that flying is unsafe, but I think this misses a number of more crucial points.

It’s most important to understand that transmission doesn’t just happen. It actually takes a number of protections falling apart one after the other. This is invoked in the “Swiss cheese model,” in which most single methods of prevention cannot block all transmission, but a layered approach of multiple precautions can stop most spread.

In this particular outbreak, two of the four passengers who got infected reported wearing masks during the flight. It also happened despite pre-departure testing. The person who brought the virus onto the plane was incorrectly reported as having been tested within 48 hours of the flight, when in fact their negative test was from four days before. The people involved in the outbreak were sitting within four rows of one another, but not everyone in that radius later tested positive for the virus. Additionally, the plane’s power unit was down for 30 minutes during a refueling in Kuala Lumpur, meaning the ventilation system was turned off.

All of these factors introduce a number of “what ifs” that we can ask about what could have prevented the transmission — and whether improving these steps could make other flights safer.

For example, what if the index case had tested within two or three days of the flight? It’s very possible that their infection would have been picked up and they never would have boarded. What if the airline used rapid antigen testing at the airport, which we know is excellent at detecting people who are very contagious? Of note for this outbreak is that the index case didn’t report any symptoms until two days after the flight, so pre-boarding symptom screening or fever checks also would not have caught them.

What if the passengers were sitting further from the index case, or if the flight were shorter? We know that distance from index case and duration of contact during travel are both related to a higher virus attack rate.

As of now, only Delta blocks middle seats, and Alaska Airlines does so in the premium section. And in the September outbreak, none of those who caught the virus on the flight were sitting directly next to the index case. Some were two rows ahead, others behind.

What if the power unit had not been turned off? We know airplanes have great ventilation with HEPA filtration that can block viruses — when the system is running. But there is virtually no way to guarantee a flight won’t have to power off its air systems for unforeseen reasons, such as maintenance issues or de-icing.

What if the passengers and index cases were all wearing better masks — such as high-filtration KF94, KN95, elastomeric N95, or N95 masks, which can provide better control of virus spread and personal protection? We know that these “hi-fi” masks can function as effectively as vaccines, if not better, in stopping transmission when worn correctly and at times of high risk.

When I tweeted about this outbreak, a number of people quickly chimed in — some saying transmission happened because the vents were off, others saying because passengers didn’t have better masks. Ultimately, we don’t know for sure which of these things it was; more likely, it was a combination of all of them.

What this also demonstrates is that it can actually be somewhat complicated to fully understand how much Covid-19 transmission is happening directly on flights — and in other venues.

In the case of this particular flight, New Zealand — which has had a remarkably low incidence of Covid-19 — actually had a mandatory quarantine period during which passengers were in government facilities for 14 days, and were monitored with regular testing. This allowed researchers to isolate the potential transmission points to the flight or airport. But infected passengers reported no close contact with one another in the airport. Genomic studies helped trace the infections as having most likely occurred on the flight itself, given that the viral samples all shared the same lineage. This level of follow-up is rarely happening in the US.

In the US currently, you can walk off a flight and your quarantine period and subsequent testing are just scout’s honor, despite being recommended by the CDC. If people don’t strictly quarantine, it quickly becomes much harder to know if transmission happened on the flight or afterward, like on your ride-share from the airport, at your relative’s house, or during some other activity.

We really don’t have a great understanding of how many infections are happening on flights. And as planes become more crowded, community transmission increases, and new, more contagious variants of the virus proliferate, the chance that someone who is actively infected is sitting next to you goes up as well.

One proxy for this risk might be the infection rate among airline staff, and this could be interesting and important to monitor over time. In Canada, infections and exposures on flights are far more readily documented, with a nearly daily list of flights that had infected passengers. Since the beginning of the pandemic, the country’s health officials have identified more than 3,000 flights landing in Canada (domestic and international) on which at least one person had Covid-19. The US would benefit from doing the same, although this needs to be coupled with rapid contact tracing as well.

Does all this mean that flights are dangerous? Does this mean not to fly?

I would say that ultimately, it depends on numerous protections holding up, which at times can and will be out of our control, both for flights and for all other activities that we partake in.

I would recommend against unnecessary travel right now, not only because I am concerned about what happens on the flight (even if many flights are ultimately low-risk) but also because of what happens after the flight. We have no enforcement on quarantining after travel, and many people cannot safely quarantine at home. The more we move around and meet up with others, the more the virus spreads.

And a single negative test three days beforehand won’t stop that, even if it picks up some infections and prevents some outbreaks on international flights. We should in fact be increasing all prevention measures on domestic flights especially. With new Covid-19 variants, even our airplane travel will require that we do many things right to avoid one especially wrong outcome.

Abraar Karan is a physician at Brigham and Women’s Hospital and Harvard Medical School. He previously worked on the Massachusetts state Covid-19 response, and is a consultant to the Independent Panel for Pandemic Preparedness and Response. The views expressed here are his own.

5 reasons why 3 STDs are roaring back in America
Why Chauvin’s conviction matters
Elon Musk’s not taking Tesla private after all
New poll shows major shift in how Americans think about men in power
Trump has finalized a controversial agreement to deport asylum seekers to El Salvador
Hospital ICUs are filling up. It’s even worse than it sounds.