What Andrew Yang is doing next: A push for UBI and “human-centered capitalism” 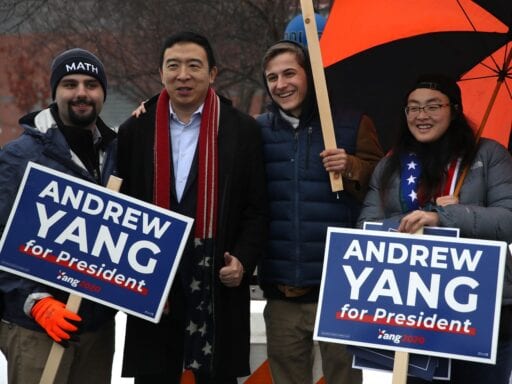 Yang’s new nonprofit, Humanity Forward, will try to advance the ideas he pushed in his campaign.

Andrew Yang’s presidential run may be over, but he is betting that the ideas he ran on — especially universal basic income and data privacy — are ready for their moment in the spotlight.

On Thursday, he announced that he’s launching an activist organization called Humanity Forward, which will attempt to build on the momentum and internet enthusiasm for the Yang campaign to lobby for “a human-centered America”. According to a press release from Humanity Forward, it will focus on initiatives to increase political engagement, change campaign finance, raise awareness of universal basic income, and protect consumer’s rights to control their data.

While Yang never did particularly well in national polls, and showed poorly in Iowa and in New Hampshire, his determined advocacy for UBI did a lot to bring a compelling concept into the mainstream. The core idea of a US universal basic income is that it would be offered to every American, without rules about who qualifies. Supporters say it could end poverty, help address technological unemployment, and boost health, happiness and social trust. It has been endorsed by people ranging from Martin Luther King Jr. to Facebook billionaire Mark Zuckerberg to libertarian economist Milton Friedman.

The idea has been catching on — there have been trials around the world, including large-scale ones in Kenya, Iran, and Alaska — and Yang did a lot to push it further into the American mainstream. Now that he’s out of the race, he says he’s tried to convince the remaining Democratic candidates to push for a UBI themselves.

The website for Move Humanity Forward clearly has a target audience — young people embittered by our political system.

“We need to present a vision that young people can see themselves in and get excited about,” Yang told Politico. “We have to speak to them in their own language, in their own environments. We think we can reach people in really fun and funny ways that will make politics seem exciting and relevant to them.”

“It will take all of us working together to bring the wave crashing down on Washington and rewrite the rules of our economy and society to work for us,” the site reads.

And, of course, there will be a podcast. “We have a number of people that have already agreed to come on,” Yang told Yahoo News. “I don’t think we’re going to lead with, like, a superfamous celebrity because that’s not really the goal of the podcast, So we’ll probably have someone who is deep into the future of work or technology or artificial intelligence.”

Lots of candidates have successfully used a presidential run to catapult themselves to national prominence. The nature of Yang’s campaign — which struggled with broad appeal but inspired a sizable and dedicated base of online supporters — may have set him up particularly well on that front. Humanity Forward will apparently be funded in significant part by public donations, though some big donors have committed the initial upfront money for the launch. (Humanity Forward is easily confused with a Yang super PAC with the same name at humanityfwd.org, but the two entities are distinct.)

Is Humanity Forward just a vehicle for Yang to run for elected office again? “I wouldn’t say it precludes me from a political run, but I’m very focused on this org, and I believe that this is the next stage of the movement,” he said.

Mueller has been questioning Michael Cohen on Trump’s Russia ties
Congressional Democrats are governing from the minority
How California went from a coronavirus success story to a worrying new hot spot
The pretty dramatic New York House primary elections, explained
This one weird trick can help any state or city pass clean energy policy
It’s official: 2020 is the busiest Atlantic Hurricane Season on record