What comes next for Trump’s impeachment in the Senate 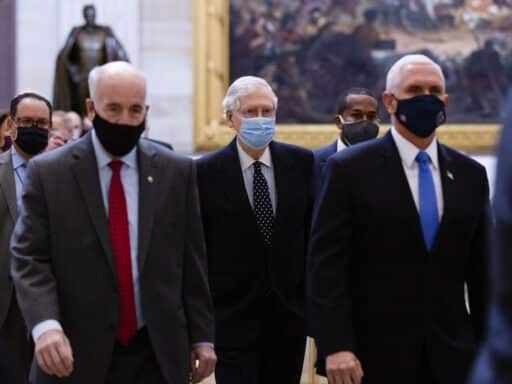 The bulk of the trial will likely unfold once Biden is president.

Now that the House of Representatives has impeached President Donald Trump for a second time, the ball is in Senate Majority Leader Mitch McConnell’s court.

But despite recent leaks that McConnell welcomes this impeachment as a means of purging Trump from the GOP, he will not reconvene the Senate ahead of schedule to start Trump’s trial quickly, his press secretary said Wednesday. Instead, the earliest a trial might begin is January 19, when the Senate was previously scheduled to resume work. And McConnell said in a letter that he has not yet made a final decision about whether he will vote to convict Trump.

McConnell’s days as Senate majority leader are numbered. Sometime in the next two weeks, Georgia will certify Raphael Warnock and Jon Ossoff’s special election wins, splitting the Senate 50-50 between Democrats and Republicans when they’re sworn in. That plus the swearing-in of Vice President-elect Kamala Harris will give Democrats the majority and make Sen. Chuck Schumer the chamber’s leader.

Still, that means McConnell will be majority leader for at least another week. And there was at least some consideration that he might reconvene the Senate and start Trump’s trial on this Friday, January 15, Reuters reported.

But in the end, he has decided not to do so — meaning the bulk of Trump’s trial will take place after Joe Biden is sworn in as president.

McConnell leaked that he wanted impeachment. But now he’s not taking quick action.

Though McConnell made the decision to indulge Trump for several weeks as he disputed the election in November, he never outright endorsed the effort. He recognized Joe Biden as the president-elect after the Electoral College voted in mid-December, and gave a speech defending the peaceful transition of power on January 6 — only to see a pro-Trump mob storm the Capitol shortly afterward.

Though McConnell made clear he was unhappy with what transpired (the Washington Post reported he planned to never speak to Trump again), the leader kept his cards close to the vest and let House Democrats take the lead in deciding how to try and reprimand Trump.

McConnell did give a sense of his thinking on the timing of any impeachment trial, though. Last week, he took the position that he could not reconvene the Senate before January 19 to start a trial — unless senators unanimously agreed to do so. The implicit assumption was that a Trump-allied Republican senator would withhold such agreement, so that McConnell “couldn’t” reconvene the Senate early.

But on Monday, Schumer pointed out that McConnell was wrong about needing every senator’s consent — that under Senate rules there is a way, if both he and McConnell agree, that the Senate could be reconvened ahead of schedule, on an emergency basis.

The idea that McConnell was seemingly on board with an impeachment drive shook the political world and made Trump’s conviction by two-thirds of the Senate seem a realistic prospect for the first time. It also raised Democrats’ hopes that McConnell would agree to Schumer’s request to reconvene the Senate and start the trial quickly — Reuters reported that GOP leaders were mulling starting it this Friday.

The Washington Post’s Seung Min Kim reported that McConnell decided not to reconvene the Senate early after all. This would mean the earliest the Senate could receive impeachment articles from the House is January 19, the day before Biden and Harris’s inauguration. It would also essentially kick the problem of the trial to Schumer to deal with, as Warnock and Ossoff will be closer to being sworn in then (Georgia’s deadline for certifying results, which must be done before any swearing-in, is January 22 — though the state could do it a bit earlier).

According to the Constitution, a federal official convicted in an impeachment trial can face two punishments — removal from office and disqualification from holding future office. The first of those will obviously no longer be relevant once Biden is sworn in, but the second will remain so, given Trump’s musings about another run for president in 2024.

So there would be real stakes to an impeachment trial for former President Trump. But there would also be questions about whether such a trial of a former official is constitutional. There is a precedent for trying a former official — in 1876, the Senate held a trial for Secretary of War William Belknap after he resigned. But the Constitution isn’t explicit, and Trump would surely attempt to challenge such a trial in court.

Still, the Senate seems set on holding a trial. And McConnell’s decision not to reconvene the Senate until the day before Biden’s inauguration means Schumer and Democrats will likely get to call the shots on how that trial is conducted — most notably, whether to call witnesses, and how long to spend on it.

One complication here is that soon-to-be-President Joe Biden would really like the Senate to spend some time confirming his executive branch nominees and advancing his legislative agenda, so he can start running the government. Trump’s trial would also likely make for a polarizing start to a presidency Biden hoped would be unifying, but there is probably no avoiding that at this point given Trump’s conduct.

Though recent practice has been for the Senate to suspend voting on other business while an impeachment trial is ongoing, Biden said yesterday that he is wondering if the Senate could spend just half of each day on impeachment and the other half on other matters. (His team is inquiring with the Senate parliamentarian to ascertain whether this would be allowed.)

Two-thirds of senators voting in favor would be necessary to actually convict Trump of impeachment charges. Once Warnock and Ossoff are sworn in, there will be 50 Democrats in the Senate — meaning 17 Republicans would have to go along to get the 67 votes necessary for conviction.

So how likely is that?

On the one hand, there’s McConnell’s reported privately expressed belief that Trump committed impeachable offenses — though he was more tempered in a letter to Republican senators Wednesday, writing that he hadn’t made a final decision on which way he will vote, and that he will consider the evidence.

The fact that Trump could run again in 2024 unless he is convicted provides a particular incentive for action among Democrats, and some Republicans. In fact, Trump-supporting senators who plan to run for president themselves in 2024 would probably be thrilled if Trump were banned from competing against them, even though they’d surely pretend to be outraged it were happening. If McConnell, freshly reelected and not facing another primary until 2026, wants to try to purge Trump from the party, now would be the time.

On the other hand, the widespread enthusiasm for Trump among the Republican base hasn’t diminished much. And despite some high-profile defections in the House, he’s retained the support of the overwhelming majority of the GOP conference — only 10 of 211 House Republicans voted to impeach Trump this time around.

But House Republican votes technically weren’t necessary to impeach Trump, as Democrats could get that done with a simple majority. So, knowing they couldn’t change the outcome, impeachment-curious House Republicans may have felt they could take the politically safe approach of sticking by Trump.

Furthermore, the Senate is different than the House, as recently seen in the votes on overturning Biden’s wins in Arizona and Pennsylvania. House Republicans supported both objections 121-83 and 138-64, but Senate Republicans voted them down 45-6 and 44-7.

Still, some key Republican senators, like Lindsey Graham (SC), Tim Scott (SC), and Roy Blunt (MO), have come out against impeachment in recent days. Also, despite those intriguing leaks, McConnell hasn’t committed to supporting it either (and, per the Washington Post’s Josh Dawsey, he won’t whip senators toward either position).

So it remains entirely plausible that, despite a violent insurrection that endangered the lives of members of Congress, partisanship and polarization will still triumph in the end as Republicans stick by Trump. But given McConnell’s decisions on timing the trial, we’ll have to wait until the Biden administration to find out.

The lesson Democrats should take from Florida’s $15 minimum wage vote
Why movie theaters are trading popcorn and soda for chimichangas and custom cocktails
How to turn off political ads in your Facebook News Feed
President Trump’s checks repaying Michael Cohen for hush money, explained
A federal court ruling could allow Trump to deport 400,000 immigrants next year
The new novel How to Be Famous is an unabashed love letter to teenage girls