What comes next in the Kavanaugh confirmation 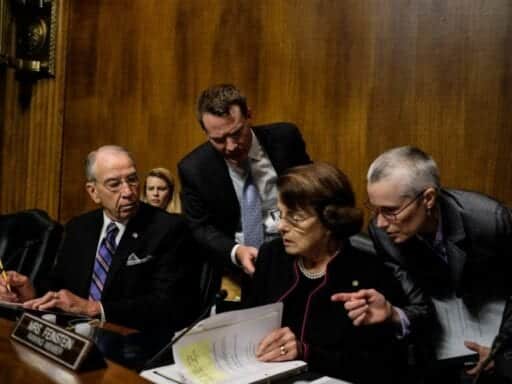 The Senate Judiciary Committee is still planning to vote on Kavanaugh on Friday.

Ford delivered emotional testimony accusing Kavanaugh of trying to force himself on her while the two were both in high school, attempting to remove her clothing and putting his hand over her mouth when she tried to scream.

“I am here today not because I want to be. I am terrified. I am here because I believe it is my civic duty to tell you what happened to me while Brett Kavanaugh and I were in high school,” she said, “I felt I couldn’t not do it.”

Kavanaugh has unequivocally denied all allegations.

“This confirmation process has become a national disgrace,” Kavanaugh said in an intermittently angry and tearful opening statement. “The Constitution gives the Senate an important role in the confirmation process, but you have replaced advice and consent with search and destroy.”

Even before the testimony, the Senate Judiciary Committee scheduled a vote on Kavanaugh’s Supreme Court confirmation on Friday morning — something Grassley has not indicated that he plans to reschedule. Barring some change in events, like Kavanaugh withdrawing from the process or lawmakers pushing a last-minute delay, Grassley is expected to carry through with the vote.

It’s worth noting that regardless of how the committee vote goes, Senate Majority Leader Mitch McConnell is able to bring Kavanaugh’s nomination to a floor vote, which could begin on the Senate floor as early as Saturday. Thanks to procedural rules, Kavanaugh is not expected to actually get a vote from the full Senate until next Monday or Tuesday.

Theoretically, it would be possible for Kavanaugh to get voted on by the full Senate on Saturday — but that would require what’s known as “unanimous consent” by all 100 lawmakers. Democrats have made it clear they object to his confirmation, so that is unlikely to happen.

In the coming days, all eyes turn to a handful of pivotal swing seat Senators, who could make or break Kavanaugh’s nomination. These include moderate Republicans: Susan Collins (ME), Lisa Murkowski (AK), and Jeff Flake (AZ), all of whom have expressed concerns about the sexual misconduct allegations that Kavanaugh has faced and have yet to announce their position on the nomination.

It’s not yet clear whether Thursday’s testimony has affected where they stand.

How Trump made it that much harder to become a US citizen
Collisions reveal a Navy tragically undone by its can-do spirit
The Senate just failed to pass more stimulus amid a struggling economy. Here’s why.
A Silicon Valley firm said it could help investors get expedited coronavirus tests — but then said i...
Trump has tested negative for coronavirus, White House says
Why are the cats sexy? and other Cats questions you were too embarrassed to ask.