What does the storming of the Capitol mean for the electoral vote count? 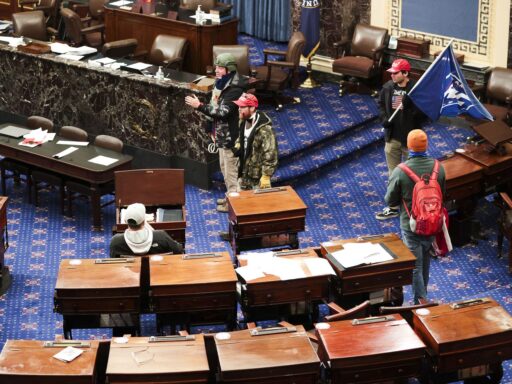 This is an unprecedented situation.

President Donald Trump’s supporters forcibly stormed the US Capitol Wednesday, prompting Congress to halt its counting of the electoral votes that will certify Joe Biden’s victory until the security threat is under control.

This is a stunning situation, unprecedented in recent memory for a country that has long treasured its tradition of the peaceful transition of power. So what comes next?

So long as members of Congress themselves remain physically safe and are able to reconvene to complete the vote count in the next two weeks, this chaos won’t actually end up delaying Biden from being inaugurated on January 20.

One possibility is that law enforcement gets the Capitol back under control, Congress reconvenes there, and the counting of the electoral votes simply continues as planned. Another possibility is that Congress would convene in an alternate location and conduct the count — but it’s not entirely clear whether that would be legal, since the Electoral Count Act appears to specify that the count must take place “in the Hall of the House of Representatives.”

So the safest bet would be to return to the Capitol once order is restored, and Rep. Hakeem Jeffries (D-NY) said this afternoon that that’s the current plan, according to Matt Fuller of the Huffington Post. That might not take long — Fuller reported shortly before 4 pm Eastern that the sergeant at arms said it could happen within half an hour — but other reports suggest it could take longer.

Up until now, Trump’s effort to overturn Biden’s win has focused on legal mechanisms, such as lawsuits and an effort to get Congress to throw out the results. These legal efforts have been rejected again and again, and the in-progress effort from Trump supporters in Congress to challenge the results was certain to fail too. Nothing has happened to change that. The legal procedures are still entirely on track to make Biden president.

The storming of the Capitol by Trump supporters introduces an illegal element to the proceedings — an attempt to disrupt the operation of government by intimidation and force. But so long as order is restored, this will be just a brief hiccup in the process of making Biden the next president.

What if order is not restored?

If it somehow proves impossible to restore order and complete the vote count before noon Eastern time on January 20 — when Trump and Vice President Pence’s terms expire, and Biden and Kamala Harris are supposed to be sworn in — we’d enter an unprecedented legal situation. The Presidential Succession Act of 1947 states that the speaker of the House (Nancy Pelosi) would become acting president if both the presidency and vice presidency become vacant. But there have been questions about whether that law is constitutional.

Another risk is what happens if Trump tries to go further down the road of illegality — by, for instance, attempting to deploy the military and ordering a new election, as his ally Michael Flynn has suggested. That would bring on a constitutional crisis.

But there would be tools to fight back against Trump too. Pence and a majority of Cabinet officers could strip Trump of his powers immediately by invoking Section 4 of the 25th Amendment. Alternatively, Congress could hold a speedy impeachment of the president and vote to remove him from office, if a majority of the House and two-thirds of the Senate agree. This would be a true test of whether the rule of law could prevail over a coup.

The current signals from Trump’s team are that they think things have gone too far. But the question is whether the president himself agrees. Trump has called on “everyone at the U.S. Capitol to remain peaceful,” and later Wednesday afternoon he said they “have to go home now” (while reiterating that he thought the election was stolen from him). If the situation does settle down, the transition could get back on track — albeit no longer quite so peacefully.

The 24 best TV shows of 2018 so far
Lung scarring, heart damage, and anxiety: Some Covid-19 survivors face long-term complications
Why fracking got so much airtime in the home stretch of Trump’s campaign
Your questions about the family separation crisis at the border, answered
Mischief Managed
Martin Scorsese’s The Irishman takes on the director’s whole history — and could win him his second ...