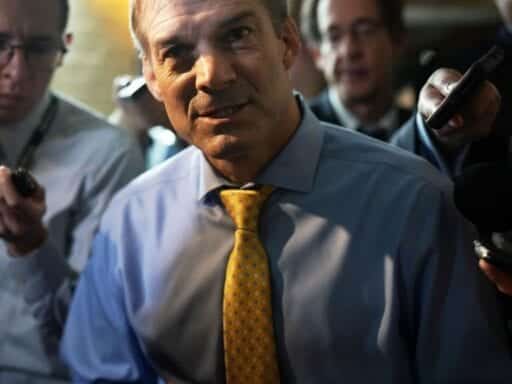 Donald Trump shrugged off criticism of his claim that he gets to grab the genitals of anyone he wants as just “locker room talk.” Rep. Jim Jordan is trying to explain away why he shrugged off Ohio State wrestlers who say they told him the team doctor grabbed their genitals as just “conversations in a locker room.”

Trump wasn’t actually in a locker room, but on an Access Hollywood bus with Billy Bush. Jordan was actually in a locker room when half a dozen former athletes say he was told about abuses or would have noticed the “cesspool of deviancy” around the Ohio State wrestling team, where Jordan was a coach for 20 years. (Jordan is not accused of sexual misconduct himself, but of knowing about it and not acting.)

For Trump and Jordan, the locker room is a place, both metaphorical and literal, where men can be men. Their version of manliness values bravado and aggression above the needs of others. Trump, the most powerful man on the planet, and Jordan, one of the most powerful men in Congress, believe that manly men like themselves get to do (or not do) and say (or not say) whatever they want. It’s not about responsibility to others. It’s about what they get — what they’re entitled to get as men.

A toxic cocktail of power and entitlement is not the same as leadership, of course. Great leaders know that their role isn’t to get away with with sexual abuse or covering it up. Leadership is about obligation and responsibility.

From Trump to Jordan to other powerful men — like Al Franken, Bill Shine, or Harvey Weinstein, they deny their role in sexual harassment and abuse, either committing it or looking the other way. For them, their first priority is maintaining power for themselves, not taking responsibility for their actions. All they see is a game they play to win for themselves. Maybe they’ll hit the locker room at the end of the day.

Trump and Jordan are the real victims

Trump was, and Jordan is, miffed that men and women from their pasts are stepping forward to call them out. They both say these accusers are liars, motivated by politics.

Trump was running for president when the Access Hollywood tape sent shockwaves across the country. More than a dozen women soon stepped forward to describe how he sexually assaulted them, many in ways that echoed his own words. In the last week, half a dozen men have stepped forward to say Jordan must have known about abuse at Ohio State. Jordan might run for speaker of the House in the fall.

“It’s a total setup,” Trump said at a campaign rally in 2016. “Now suddenly after many, many years, phony accusers come out less than a month before one of the most important elections in the history of our country and I don’t know who they are.”

“Look at her, look at her words, you tell me what you think. I don’t think so,” Trump said. “She is a liar. Check out her Facebook page, you’ll understand.”

Jordan fleshed out this conspiracy, claiming that the law firm hired by the university to investigate the broader case sent an email to his old account, never getting his side. The same law firm was involved in the Steele Dossier, a connection Jordan implies is proof of a conspiracy. (The law firm claims they also called Jordan, left messages and sent emails to other accounts seeking an interview for the investigation.)

“The same law firm that can find an expert spy to put together a dossier to go after President Trump can’t find a congressman’s email address? Can’t get a hold of me?” Jordan said to Baier. “That is just complete bogus.”

Whose team are we on?

Jordan’s been loyal to Trump since he took office. Trump’s returning the favor.

At a rally earlier this week, Trump said: “Jim Jordan is one of the most outstanding people I’ve met since I’ve been in Washington. I believe him 100 percent. No question in my mind.”

Trump is comfortable backing up men accused of covering up sexual harassment or abuse. Earlier the same day the White House announced he’d hired Bill Shine to run his communications operation. Shine was fired last year as co-president of Fox News over helping to build a culture of sexual harassment, abuse and silence.

Other Republicans, including Freedom Caucus Chairman Mark Meadows, have come to Jordan’s defense, too. Conservative media outlets are joining in attacking the credibility of the accusers.

Conservatives, in this case, see themselves as a team, circling the wagons around one of their own. Trump in the White House makes it more difficult for Republicans to attack conservatives implicated in sexual harassment cases. But the phenomenon is not unique to Republicans. Democrats, too, are grappling with when and if they should turn on their own in cases of misconduct.

There’s still a big unanswered question in the #MeToo era. What happens to men credibly accused of misconduct? Should political parties oust him? Should he lose his job?

Jordan claims that if he had known about abuse he would have stopped it.

A good leader puts other first, too. But power in Washington is too often about entitlement and not responsibility.

#ReleaseTheButtholeCut helps noted box office flop Cats find new life in a time of crisis
Private Life is a terrific, heartbreaking look at a marriage through the lens of infertility
3 big health care stories to watch for in 2020
The bizarre media hoopla over Alan Dershowitz’s social life in Martha’s Vineyard, explained
Why firing squads are making a comeback in 21st-century America
Independence Day started the most American of movie traditions: massive advertising campaigns