What far-right extremists have planned for inauguration weekend 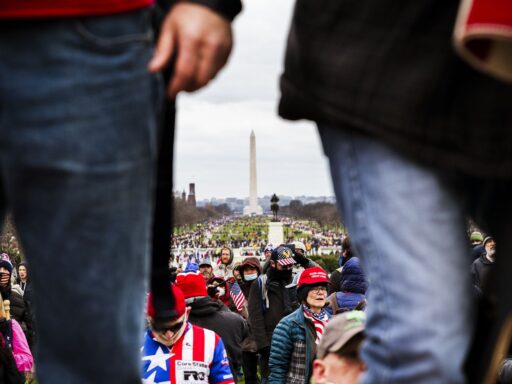 The FBI has been alerted of threats to “storm” government offices in every state.

With the nation still reeling from the January 6 storming of the US Capitol by a mob of Trump supporters, law enforcement officials are bracing for something equally, if not more, terrifying: what comes next.

Emboldened by their ability to invade the seat of American government, many rioters and their supporters are plotting a repeat, with multiple rallies and other actions planned between now and President-elect Joe Biden’s inauguration on January 20. The FBI has warned of armed actions planned at state capitols around the country. Members of Congress have been harassed at airports and are concerned about threats to their homes and families. And lawmakers on Monday were briefed on a plot to encircle the Capitol and prevent Democrats from entering so that Republicans could take over the government, according to HuffPost.

Lawmakers and experts in national security and extremism are on alert for insurrectionists’ next moves. “On January 6th their energy was focused on Congress. On the 20th their energy will be focused on Biden,” Megan Squire, a senior fellow at the Southern Poverty Law Center who studies online extremism, told NBC. “That’s concerning especially since they’re not remorseful or ashamed.”

That said, at the very least law enforcement should be convinced of the serious threat pro-Trump insurrectionists pose — something too many downplayed in the run-up to the Capitol riot on January 6. And experts say now is the time to prepare for a response that, while not necessarily more violent, is smarter than the one Capitol Police mounted last Wednesday.

“There needs to be a call for great preparation […] and great restraint by police officers” in the weeks ahead, R.P. Eddy, a counterterrorism expert and CEO of the intelligence firm Ergo, told Vox. “They’re going to get tested again.”

When rioters stormed up the Capitol steps and into the halls of Congress on January 6, many encountered little resistance and were able to walk away from the riot without immediate consequences. Just 69 people were arrested in DC that night, out of thousands of insurrectionists present.

Many say the ease with which they were able to gain access to the Capitol, coupled with President Donald Trump’s continued defiant statements, are likely to embolden his supporters to try again. And many plans are already in place.

For example, the FBI has warned of an “armed march” on the US Capitol and in all 50 state capitals on Sunday, January 17, HuffPost reported. The events are backed by the extremist “boogaloo” movement, which advocates for gun ownership and, in some cases, overthrowing the federal government, as Jane Coaston explained for Vox in 2020.

Per HuffPost, the FBI is particularly concerned about threats by boogaloo groups in Minnesota and Michigan. One boogaloo adherent “suggested the idea of using a gasoline-based device with a tripwire in Lansing, Michigan to cause a distraction while other individuals ‘take’ the capitol,” according to an FBI alert, which added that the person in question “considered himself at war with the government, particularly with politicians and federal agents, and wanted to make a statement with the actions.”

Michigan has already been the site of a protest against Covid-19 restrictions, during which armed demonstrators entered the statehouse, as well as a plot to kidnap Democratic Gov. Gretchen Whitmer. State police are increasing security ahead of potential rallies, and open-carry guns have been banned from the statehouse.

Meanwhile, a pro-gun rally by the Virginia Citizens Defense League is still planned for January 18. The group was unable to secure a permit but has asked supporters to still participate in a caravan around the Virginia Capitol building. Last year, more than 20,000 people attended the VCDL’s annual Lobby Day event.

Law enforcement officials and security experts are also concerned about Inauguration Day, which will bring together members of Congress who were targeted on January 6 with an incoming president and vice president who represent what Trump and many of his supporters falsely claim was a “stolen” election.

The FBI has received information about groups planning to “storm” government offices in every state on Inauguration Day, according to ABC. And pro-Trump insurrectionists have been talking about an inauguration event across social media channels, NBC reported. “Round 2 on January 20th,” one person posted on the forum TheDonald.win. “This time no mercy. I don’t even care about keeping Trump in power. I care about war.”

With Trump banned from Twitter, and Apple and others banning the conservative alternative Parler from their marketplaces, chatter around the inauguration has moved to the communication app Telegram, per NBC’s Anna Schecter. Some on the app have warned supporters to avoid smaller state marches and wait for crowds on Inauguration Day. “Do not attend armed protests at state capitols before inauguration!” one user posted. “Possible sinister plot hatched by radical left to take away gun rights!”

Meanwhile, Capitol Police on Monday briefed lawmakers about a plan by extremists to surround the White House, Capitol building, and Supreme Court, HuffPost reported. The insurrectionists would then block Democratic members of Congress from entering the Capitol, possibly even killing them, to allow Republicans to take over.

Lawmakers were warned not to share specifics about this plan, including dates, because it could help organizers, according to HuffPost.

And beyond all this, individual lawmakers are also facing threats and harassment. Rep. Al Green (D-TX), for example, told Politico he was accosted multiple times on his trip home to Texas from DC last week, with apparent Trump supporters calling him “Mr. Impeachment” (he has supported calls to impeach the president) and a “traitor.”

“These were some very angry people,” Green told Politico. “I’m a son of the segregated South. I can remember the expressions of hate when people were saying ugly things, calling me ugly words that I don’t repeat. I remember the look. And I saw that on the faces of some of these people.”

How authorities are responding and preparing for threats

The question facing law enforcement agencies around the country in the coming days is how to protect lawmakers and the public without escalating the violence. Capitol Police told lawmakers on Monday that they were prepared for terrorist plots in the coming days, including the idea to encircle the Capitol, HuffPost reported. However, some members of Congress fear for their safety traveling back to Washington, or from their Washington residences to the Capitol. And one lawmaker told HuffPost that Capitol Police didn’t have an adequate response to that concern.

In general, experts say, police will have a delicate line to walk. On the one hand, the impending threats are very real, and law enforcement agencies can’t make the mistake of underreacting as they did ahead of Wednesday’s riot. “On 1/17 and 1/20, every social media site in the world is blinking hard red,” Eddy said.

At the same time, there’s a danger now of police overreacting, especially because they’ve just seen one of their own fatally injured and another crushed against a door by the Capitol mob. Around the country, “those police officers all watched the same videos that you and I watched,” Eddy said.

“It is incumbent upon governors and police leaders right now to make sure they know, on 1/17 and 1/20, when these mobs show up again, do not start shooting into crowds,” he added. “Let’s not lead to the cycle of violence.”

“Are they alive?”: Uighur Muslims demand videos of relatives in Chinese internment camps
Julián Castro ends his presidential bid
At UC Berkeley, Brown, and Yale, students are fighting to keep Palantir off campus over its ICE cont...
The next Democratic debate will take place right before the New Hampshire primary
The pandemic seemed like the end for this bed-and-breakfast. Then locals started coming.
Will luxury towers edge out the last of the working-class Chinese in New York’s iconic Chinatown?

Poll: Most Americans want to break up Big Tech