What George Kent’s bow tie says about his impeachment testimony 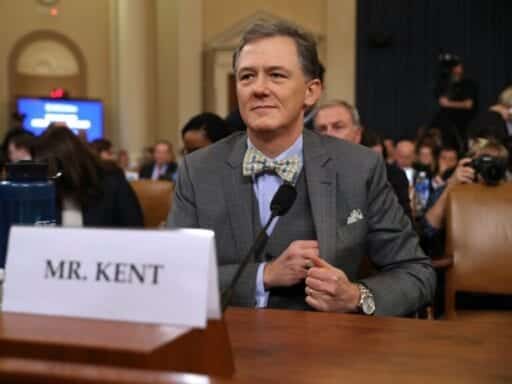 The State Department official is testifying in style.

For his testimony in the first day of public hearings of the House of Representatives’ impeachment inquiry into President Trump, State Department official George Kent decided to wear a bow tie.

In the halls of the Capitol, neckties, not bow ties, are the norm. And that’s drawn attention to Kent, the deputy assistant secretary of state for European and Eurasian affairs — a man who has largely stayed out of press and public awareness until now.

The piece Kent wore for his appearance before the House Intelligence Committee Wednesday appears to be one of his favorites (he also wears it in his State Department headshot): a cream bow overlaid with a turquoise, olive green, and ochre medallion print.

He paired it with a light blue collared shirt and a matching pocket square, tucked into his gray three-piece suit. The final and unexpected accessory to top off Kent’s testimony outfit is a blue Nalgene water bottle, which he dutifully carried to both the closed-door and public hearings.

George Kent is wearing the same bow tie at today’s hearing and in his State Department headshot, leading me to believe that this is his favorite bow tie pic.twitter.com/XFgYhM62Yv

The ensemble gives Kent a benign appearance when juxtaposed with Ambassador William Taylor, the second witness, who chose to wear a black suit with a dark green tie — typical Washington attire. The public hearings are a historic moment for the participants and the country, as this is the fourth-ever impeachment inquiry into a US president.

As Kent launched into his opening statement, he drew comparisons to a diplomatic Mr. Rogers (or a sterner Bill Nye?). Kent’s dapper outfit will likely set him apart from future testifying witnesses, who will make appearances on Friday and later next week — and says a lot about who he is, and what he brings to the inquiry.

Who’s the guy in the bow tie?

George Kent has worked as a career foreign service officer for more than 27 years. He’s served two stints in Ukraine and took up his current post in Washington in the summer of 2018. There, he oversees the Trump administration’s policy towards Ukraine and five other countries.

As Vox has reported, Kent wasn’t as personally involved in the events that transpired in Ukraine this summer as Taylor, but he brings deep knowledge of Ukraine and the Bidens’ role in the country to the proceedings. He has also served as the senior anti-corruption coordinator in the State Department’s European bureau, which means he can give insights as to how the US government typically addresses issues of corruption in a country like Ukraine.

While Kent is not the first (and likely not the last) person to wear a bow tie to a formal House of Representatives event, he’s managed to do it stylishly, at least according to Twitter. To be fair, Kent has not escaped criticism, but many Twitter users seem to be “pro bow tie.”

George Kent is maybe the first time in recent memory I’ve seen a bowtie and thought: “That looks good.”#ImpeachmentHearings

Why is a bow tie such a big deal?

For such a small accessory, bow ties are unusually controversial. As the New York Times’ style section noted in 2005, “Perhaps no single male fashion accessory provokes as much emotion as the bow tie … People who have to look at them can find them irritating or worse.”

People either love the bow tie or hate it. Breaking the suit-and-tie dress code in Washington is a risky move, and poor fashion choices have been publicly shamed by observers. (Case in point: Former Rep. Jared Polis was roasted by GQ for pairing a bow tie with a purple golf polo shirt. He’s now governor of Colorado, though, so redemption is possible.)

But there have been plenty of public officials who’ve made the spiffy accessory their trademark throughout history; Theodore Roosevelt, Winston Churchill, New York Sen. Daniel Patrick Moynihan and Illinois Sen. Paul Simon among them.

The bow tie is “classic Kent,” said journalist Christopher Miller on Twitter. Miller pointed out that Kent’s cufflinks (which aren’t clearly visible in the hearing’s livestream) was made out of pins he has bought around Ukraine.

Given Kent’s decades-long experience in foreign affairs, these accessories reflect his authority and personal connection to the topic matter he’s asked to testify on.

Some point out Kent’s bow tie today. Classic Kent. Check his cufflinks—he made several out of Soviet-era regions pins bought around Ukraine. I remember he had dozens of traditional textiles hanging on his office walls. He could tell you where each from, what pattern represented.

Others also noted how the bow tie is representative of foreign career officers’ personal sense of style.

George Kent’s bow tie is representing the Foreign Service in fine style. That is the State Department I’ve known for 30 years.

George Kent wearing a bow tie is a reminder that the Coen brothers really *nailed* their caricature of a career foreign analyst with John Malkovich in Burn After Reading. pic.twitter.com/JFHuUQUR1w

Finally, we can’t forget the blue Nalgene bottle Kent brought to both of his testimonies. Instead of opting to drink from the tiny plastic water bottles offered to the witnesses, Kent came prepared with a whopping 48-ounce jug to keep him hydrated.

Mad respect to Kent for caring about the environmental impact of these proceedings pic.twitter.com/H2Oq8VIJEW

In the context of a high-profile testimony, a person’s appearance matters. We subconsciously draw cues and make assumptions about a person based on their self-presentation.

Kent was brought on to speak about his expertise on Ukraine, and how the public reacts to his testimony will be, in part, influenced by how he chooses to present himself. Regardless of how his fashion choice was publicly received, Kent was probably aware that this public testimony is his moment in history.

What else could he do, then, besides dress for the part?

Donald Trump, the resistance, and the limits of normcore politics
Noam Chomsky’s Green New Deal
Facebook is launching a news section — and will pay some publishers millions
Still haven’t voted? Don’t send your ballot by mail.
Every platform that has cracked down on Trump this week
HR experts: We’d nip Biden’s behavior in the bud