What happens to Black Friday crowds in a pandemic? 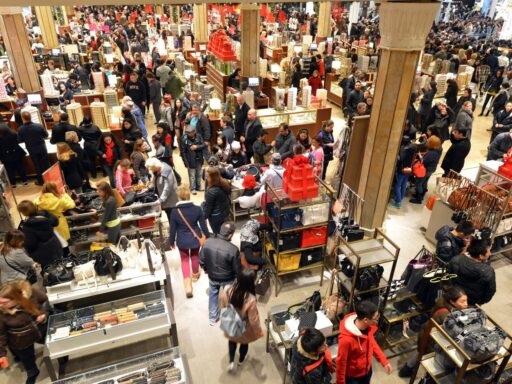 Retailers like Macy’s, Home Depot, and Walmart are trying to keep stores safe — and you shopping sales.

Even before the coronavirus pandemic changed everything about, well, everything, Black Friday was already on its last legs. The post-Thanksgiving shopping holiday kept creeping up earlier and earlier. Retailers started opening their stores before dawn on Friday, then at midnight, encouraging shoppers to wait in line for doorbusters before they had even finished digesting their turkey and mashed potatoes. Eventually they threw caution to the wind and started opening on Thursday afternoons, well before most people had gotten a chance to eat dinner at all.

This year, thanks to the seemingly endless pandemic, Black Friday has become even more nebulous, with major retailers emphasizing online shopping and offering month-long sales to keep crowds at bay. And with good reason: a Deloitte survey found that more than half of shoppers polled are anxious about shopping in stores during the holiday season, not just on Black Friday but in the time leading up to the winter holidays as well. Another survey, by Accenture, found that 61 percent of respondents plan on limiting their in-store shopping time, not only to keep themselves safe but to keep essential workers safe as well.

More than half of shoppers polled are anxious about shopping in stores during the holiday season.

Nothing says “super spreader event” quite like a crowd of hundreds of people — many of whom just finished having a lengthy indoor meal with friends or relatives who may or may not have traveled across the country — gathered outside a store. A traditional Black Friday wouldn’t just be dangerous for shoppers; it’d also be dangerous for store employees, who already have to work long hours on the holiday.

In order to avoid that worst-case scenario, many big retailers are changing the structure of their Black Friday sales, extending them for weeks and encouragingonline shopping. Walmart, for example, is stretching its sales across three weeks. The retailer had a November 4 online sale followed by a November 7 in-person sale, a November 11 online sale followed by an in-person sale three days later, and is having a final online sale on November 25, with its last in-person sale happening on Black Friday proper. Spreading the sales across three weeks “will be safer and more manageable for both our customers and our associates,” Scott McCall, Walmart’s executive Vice President and chief merchandising officer, said in a press release.

For each of the three in-person sales, customers are being asked to wait in a single-file line outside the store. Employees — including a designated “health ambassador” — will greet customers, ask them to put on masks, and let them into the store in batches. Stores will be kept at 20 percent capacity to facilitate physical distancing, according to the Associated Press. Customers will be given sanitized shopping carts.

Target, arguably Walmart’s biggest competitor, is taking a similar approach. The retailer is having several week-long sales over the course of November. Like Walmart, Target will limit the number of customers who can be present in any given store at a time, though it’s unclear what those limits will be. When asked whether stores would be operating at limited capacity, a spokesperson told The Goods that stores’ “capacities account for six feet social distancing guidance throughout our stores and key areas like our check lanes. We also continue to follow local government mandates.”

Target is encouraging customers to reserve spots in line ahead of time, and said it’ll let customers check online to see if there’s a line at their local store before heading over. Rather than waiting in a physical line, customers will get a text telling them when it’s their turn to enter the store, presumably to allow people to wait in their cars or homes rather than in clusters outside the store.

Several retailers are also expanding curbside pickup to include sale items, another tactic to encourage customers to shop online instead of in-store. Target, Walmart, Best Buy, and Macy’s are all expanding curbside pickup for this reason. Both Macy’s and Best Buy will be closed on Thanksgiving Day, harkening back to a time when Black Friday was a single-day event rather than a weekend-long one. That said, both retailers have extended their sales throughout the month. While they may be closed on Thanksgiving, both Best Buy and Macy’s had sales throughout November. JCPenney, another major Black Friday retailer, is having an eight-day sale.

While traditional brick-and-mortar retailers are trying to encourage customers to shop online, Amazon is playing up its in-person offerings. It may seem counterintuitive, given Amazon’s delivery-focused business model, but according to RetailDive, the digital retailer is also focusing on alternatives to home delivery. Getting packages delivered may be safer, but given the uptick in online shopping, it could also lead to orders being delayed or even lost. For that reason, Amazon is emphasizing its “alternative delivery locations” for customers “in more than 900 cities and towns across the U.S.” Though Amazon is a primarily online retailer, it does have Amazon 4-star stores, Amazon Bookstores, and delivery hubs inside some Whole Foods locations.

Retailers are largely framing their pandemic-era Black Friday plans as a way of protecting customers and encouraging them to feel safe, but there’s also the matter of worker safety as well. Unlike shoppers, who have the option of picking up their items at the door or getting a text when it’s their turn to shop, retail workers will still be expected to do what they’ve been doing throughout the pandemic: greet customers, help them find what they’re looking for, ring them up, and hope that they don’t get exposed to the virus.

During the spring coronavirus surge, many retailers offered hazard pay to their workers. As the New York Times recently reported, most major retailers have since stopped. Walmart, for example, offered workers cash bonuses but never raised their wages. A few companies are still offering extra pay, however: a JCPenney spokesperson told The Goods that the brand still offers hazard pay to its workers.

Nearly every major retailer has said they’ll require all customers and employees to wear masks while in stores, a precaution that is particularly important during crowded sales. However, mask enforcement will be left to hourly employees or managers, who may have little recourse when dealing with hostile customers. In October, the Times reported that the National Retail Federation had a new partnership with the Crisis Prevention Institute to teach workers how to prevent and deescalate disputes with shoppers who refuse to wear masks or follow other safety precautions.

“This is one additional opportunity for our retailers to say: ‘Our staff members are trained. If there is an incident, they will handle it and you will be safe shopping,’” Bill Thorne, the executive director of the National Retail Federation, told the Times.

But earlier this year, the Centers for Disease Control and Prevention warned stores against doing that very thing. In August, the health agency told retailers that their employees should refrain from arguing with anti-maskers, because they could become violent. It’s essentially a choice between asking employees to be potentially exposed to coronavirus and asking them to be potentially exposed to coronavirus and a violent attack.

Ultimately, this year’s Black Friday is a balancing act between keeping customers safe, keeping workers safe, and perhaps most importantly for retailers, dealing with the ongoing logistical and financial side effects of a pandemic that seems to have no end in sight.