What if Trump refuses to concede the election? 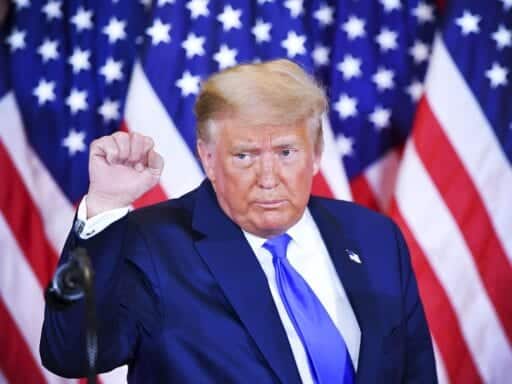 Joe Biden, if he wins, doesn’t have many options to force out Trump.

If Donald Trump refuses to concede the US election to Joe Biden and instead hunkers down in the White House past Inauguration Day, the country would be in a new and dark chapter of its history. But just how likely is this to happen? And what could anyone do about it?

Previous presidents have disputed accepted election results, though none has gone to the extreme of refusing to leave office. While the chance of this occurring now remains low, Trump’s insistence that he has already won the election means the probability isn’t zero.

“We will win this, and as far as I’m concerned, we already have won it,” he said from the White House early Wednesday morning, even as hundreds of thousands of votes remained to be counted. He then went on to state the election is “a fraud on the American public.”

So let’s assume the worst: Biden is officially declared the winner by state vote counts, Trump won’t concede, and he says something like, “Actually, I won and will serve another four years.” At that point, Biden has one option: Get through the inauguration, then kick Trump out of the White House with the help of the Secret Service.

However, if the result is contested and there’s a lengthy legal battle to certify a winner, there’s little anyone could do to dislodge Trump from his residence or from his grip on power.

Such is the precarious situation the US might face if Trump opts to hold on to the White House illegitimately. As wild as they may be, it’s worth trying to understand both situations.

President Biden could have the Secret Service remove Trump

The Constitution is crystal clear about when one presidency stops and another starts. “The terms of the President and Vice President shall end at noon on the 20th day of January,” the 20th Amendment reads, “and the terms of their successors shall then begin.”

It’s a law and a process that Senate Majority Leader Mitch McConnell has gone on record to defend.

The winner of the November 3rd election will be inaugurated on January 20th. There will be an orderly transition just as there has been every four years since 1792.

If Biden is officially declared the winner — once his Electoral College vote total surpasses 270 votes — he’ll give an inauguration address at the time the law designates. Trump could and should be on the dais seated behind Biden, as is the traditional gesture to symbolize a peaceful transfer of power. But if Trump opts to watch the event from the White House and stays put once Biden’s sworn in, the new president might take matters into his own hands.

As president, Biden would have “the power to direct the Secret Service to physically remove Trump from the White House like any other trespasser,” said Barbara McQuade, who served as the US attorney for the Eastern District of Michigan from 2010 to 2017.

That’s simple enough. After 12 pm on January 20, Biden would be the president and Trump wouldn’t be. A president’s Secret Service detail is tasked with keeping intruders off the premises, and at that point Trump would not be welcome; Biden’s agents would escort Trump out of the White House and revoke his access to the property.

It’s important to note that the US military — a separate entity from the Secret Service — doesn’t plan to play a role in the US electoral process, even if Trump tries to usurp power. Asked about such a situation by lawmakers in August, Army Gen. Mark Milley, the Joint Chiefs chair, said, “In the event of a dispute over some aspect of the elections, by law, US courts and the US Congress are required to resolve any disputes, not the US military.”

Still, a scene featuring a new leader forcibly removing the old one would be deeply embarrassing for the country and, more importantly, dangerous to the health of the nation’s democracy.

But it wouldn’t be as bad as the actual worst-case scenario: a constitutional crisis of epic proportions.

If the US government doesn’t certify a winner, Trump might just stay in the White House

But let’s say we’re not in normal times and it looks like Biden has won, but Trump and his campaign issue legal challenges contesting the result (which has already happened). If Trump decides to stay in the White House until those legal challenges are resolved — and those challenges cause a delay in Congress certifying the results — then we’re in scary and uncharted territory.

“If the president refuses to concede or leave, then no, there’s nothing to be done about that until there’s a result to the election,” said Lindsay Cohn, an expert on national security law at the Naval War College. In other words, Trump can just hang out at the White House beyond the January 20 transfer-of-power date mandated by the Constitution.

This situation could get even trickier if a Trump lawsuit makes its way to the Supreme Court. The nation’s highest legal body, which currently has three Trump-appointed justices on it, could make a decision that hands the win to Trump in a process that could be totally legitimate.

This isn’t an outcome anyone expects or wants. If Trump loses, he’ll be expected to concede, even if he puts up a legal fight. But Trump’s post-election actions thus far have inched the impossible toward the improbable — and that’s worrying enough.