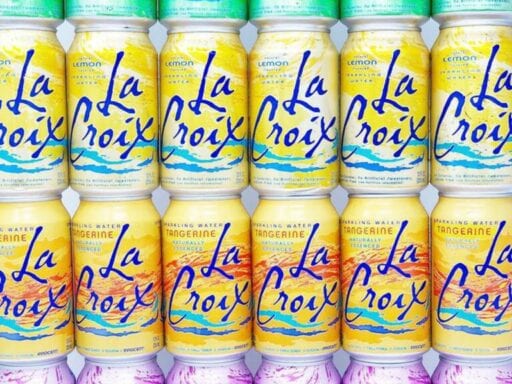 The company’s “natural flavors” have been an ongoing mystery.

Though it is the year 2018, there are many things we still do not know. Why are all the bees dying, for example? What is Gritty? Also: what, exactly, are the ingredients in LaCroix?

This is the question raised in a new class-action lawsuit against National Beverage, LaCroix’s parent company, alleging that while the brand claims to be “all natural,” it contains a number of artificial ingredients, “including linalool, which is used in cockroach insecticide.” This is an interesting fact, although another interesting fact is that linalool is found in 63 different spices, and is “a common flavoring in beverages and foods,” according to a report from the National Institutes of Health’s National Toxicology Program.

National Beverage, meanwhile, “categorically denies all allegations,” which they say were filed “without basis in fact or law.” Their initial statement maintained that LaCroix’s natural flavors are “derived from the natural essence oils from the named fruit used in each of the flavors” and that “there are no sugars or artificial ingredients contained in, nor added to, those extracted flavors.”

Those essences have been certified by the company’s suppliers to be “100% natural,” says National Beverage, which plans to “vigorously seek actual and punitive damages among other remedies from everyone involved in the publication of these defamatory falsehoods.”

LaCroix itself quickly took to Twitter to address the “misleading allegations.”

Hi, guys! We’re so grateful for all the love and support you’ve given us throughout the years.

Our main goal has always been to provide a product that’s a healthy alternative and make the world a healthier place.

We’ve heard your comments and want to address all the misleading allegations.
LaCroix sparkling water is a healthy beverage. All ingredients in LaCroix are natural. Allegations that claim otherwise are false and trouble us much as they trouble you. (2/3)

We are proud to serve LaCroix to our families, in our hospitals, and in our schools.

Please stand with us as we defend our beloved LaCroix.

“LaCroix sparkling water is a healthy beverage,” tweeted LaCroix. “All ingredients in LaCroix are natural. Allegations that claim otherwise are false and trouble us as much as they trouble you.” The company did not elaborate further, except to ask that fans “please stand with us as we defend our beloved LaCroix.”

Responding directly to customer concerns, LaCroix continued to offer the answers they always have: “Natural flavors in LaCroix are derived from the natural essence oils from the named fruit used in each of the flavors,” LaCroix tweeted. “All essences contained in LaCroix are certified by our suppliers to be 100% natural.”

Look, I am not a lawyer or a linalool scientist, and in the interest of full disclosure, I am, at this very moment, drinking a LaCroix (pamplemousse). But the suit raises the perennial question that has been haunting us for years now: What is a “natural essence” and how is it flavoring your LaCroix?

If you have not been keeping up with fizz trends, it is important to define our terms. LaCroix is canned seltzer. It originates where trends come from, La Crosse, Wisconsin, and initially positioned itself as a populist answer to snobby Euro seltzers, like Perrier. (It is, Midwesternly, pronounced “la croy.”)

For a long time, nothing really happened, and then everything, all at once. LaCroix had been gaining traction as people began searching, with increasing fervor, for alternatives to soda, but Vox’s Libby Nelson locates the seltzer’s breakout year as 2015, the year of its New York Times Letter of Recommendation. For reference, this was a full seven years after the debut of its most iconic flavor, pamplemousse (who’s European now?), but before a San Francisco street artist and latter-day Warhol started selling $500 portraits of the cans.

There are currently 21 flavors, if you count the chichi multiflavor ones packaged in the taller, fancy cans. The seltzer comes in coconut and passionfruit, but also lime and orange, and something called LaCola. This is such a “revolutionary experience,” according to the brand website, that I cannot tell you what it is.

What it does contain is less clear. As the Washington Post explains, the FDA does not require food companies to disclose the ingredients creating a “natural flavor,” so long as they all fall into the GRAS category — chemicals “generally recognized as safe.”

Luckily, the LaCroix website is here to clarify that “all natural flavors are essences or oils derived from the named fruit, i.e., lime/lime oils. There is nothing artificial in LaCroix — enjoy!”

This would be illuminating, except I don’t know what an essence is, and neither does almost anybody else. “Essence is, essentially, the mystery behind a billion-dollar brand,” wrote intrepid Wall Street Journal reporter Rob Copeland, who set out last fall to get us answers, even if — as he was quick to note — most of us don’t care. (“I have no idea what it is,” one man told him. This man also said he drinks up to 10 cans a day.)

The FDA was more forthcoming, although it could not explain what “essence” is, because the agency does not define the term. But food-labeling rules allow companies to use the word to describe “flavoring constituents derived from a spice, fruit or fruit juice, vegetable or vegetable juice, edible yeast, herb, bark, bud, root, leaf or similar plant material, meat, seafood, poultry, eggs, dairy products, or fermentation products thereof.”

According to Copeland’s research, with no help from LaCroix, essence is “a clear, concentrated natural chemical that’s been used for decades in products as varied as gravy, ice pops, coffee, shampoo, and even insecticide.” To make it, you first heat up the “skin, rinds, or broken down remnants of fruits and vegetables” — sometimes you mix in alcohol — and then you capture “the vapors” rising up off the concoction, then you condense and sell huge barrels of the product.

Essence, according to one manufacturer, who may or may not make essence to LaCroix, is “a hyper-complicated chemical, but it’s all natural, and we see it every day.” LaCroix did not disagree, but declined to provide Copeland with further details.

The weird thing, as Gizmodo pointed out at the time, is that the great mystery of LaCroix flavoring is not actually very mysterious: The FDA can tell us what “natural flavors” are, and we can decide how to feel about that. Essence may be FEELINGS, but it is also a substance that can be manufactured, then used to flavor seltzer (also, other things).

It’s true that we don’t really know what’s in a “natural flavor,” other than it is at least supposed to be some combination of chemicals that will probably not kill us, but it’s also true, as one chemist told Wired, that natural flavors are generally used in such tiny concentrations that “even if they do contain artificial ingredients, it’s unlikely that there’d be enough of anything to cause you any real harm.” (Artificial ingredients aren’t even bad, necessarily.)

Despite the claims of the lawsuit, the most potentially detrimental thing about LaCroix may just be that, like all flavored, carbonated water, it isn’t great for your teeth.

We have, for the most part, solved the mystery; we kind of knew the answer the whole time. The genius of LaCroix, though, is that they have tricked us into thinking we are still confused, that the truth is just beyond our grasp, that we are sleeping princesses under the spell of canned seltzer from Wisconsin.

What the anti-stay-at-home protests are really about
Iowa unveils its new election security feature: pieces of paper
The 2020 election calendar
Why pro-Trump evangelicals brought shofars to DC this week
Millions of women take folic acid for a healthier pregnancy. Thank Lucy Wills.
Legendary broadcaster Larry King has died at age 87