What it would take to end child poverty in America 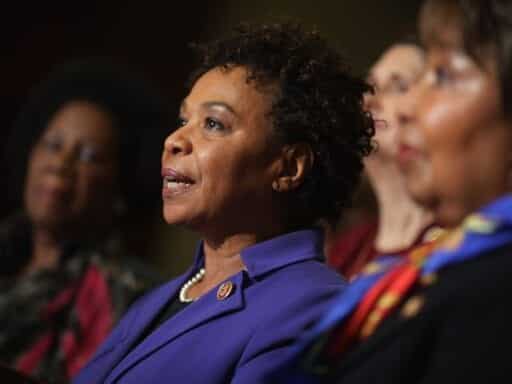 Share
Loading...
Rep. Barbara Lee (D-CA) joins Democratic members of the House of Representatives during an event marking the 50th anniversary of the start of the war on poverty in 2014 in Washington, DC. | Chip Somodevilla/Getty Images

Rep. Barbara Lee on why rebuilding the economy should mean investing in our kids.

In 2019, about one in six children in America — 12 million kids nationwide — lived in poverty. That’s a rate about two or three times higher than in peer countries. And that was before the worst economic and public health crisis in modern history.

The scale of child poverty in America is a disgrace, not only because of the suffering it creates and the potential it drains from our society, but also because it’s easily avoidable. Child poverty is not an inevitability; it’s a policy choice. And we’ve been making the wrong choice for far too long.

So for the second episode of our economic remobilization series on The Ezra Klein Show, I wanted to focus on a simple set of questions: What if we started taking our moral responsibility to America’s kids seriously? What would that world look like? How would we get there?

Rep. Barbara Lee is the chair of the Majority Leader Task Force on Poverty and Opportunity — and she’s someone who raised two kids, as a single mom on public assistance. In 2015, Lee and her colleague Rep. Lucille Roybal-Allard commissioned a landmark report from the National Academy of Sciences to better understand child poverty in America and what we could do to reduce it. Released last year, the report lays out a series of concrete policy proposals that would cut child poverty in half while paying for themselves 10 times over in social benefits.

In this conversation, Lee and I discuss the psychological impact that poverty has on kids, why investing in children is one of the best investments a society can make, what other countries do right on this front that we can learn from, what it would take to end child poverty as we know it, and much more — including why Lee, a hero to many progressives, was an early backer of now-VP nominee Kamala Harris.

This podcast is part of a larger Vox project called The Great Rebuild, which is made possible thanks to support from Omidyar Network, a social impact venture that works to reimagine critical systems and the ideas that govern them, and to build more inclusive and equitable societies. You can find out more here.

In 2015, you commissioned a National Academy of Sciences report on child poverty. What inspired you to do that?

When you look at the poverty rates in America, especially for Black and brown children, they’re off the scale. It’s shameful.

You’re looking at 31 percent of American Indians living below the poverty line, 29 percent of African American children, 23 percent of Latinx children, 11 percent of AAPI [Asian American and Pacific Islander] children, 9 percent of white children. These are statistics from 2018, which shows that over 12 million children were living in poverty. And, of course, now because of Covid-19, the numbers are even worse.

So we wanted the National Academy to conduct a study on how to cut child poverty in half in the next 10 years. The highlights from the study are very important because it’s a road map for legislative and funding priorities for the House of Representatives.

One of the parts of the report that I found really striking was that it identified two mechanisms through which growing up in poverty can affect children. The first one, which I think is intuitive to people, is investment. Not enough health care resources, sometimes not enough food, not a stimulating environment, not as much support of child care, and on and on.

But the other one is stress — the wear and terror of environmental stressors, a fear of instability, of being evicted that changes children’s cognitive development. Can you talk a bit about that dimension of it?

My background is in clinical social work, so I really understand how stress weighs on children as a result of these social determinants. Many children who live in low-income communities, especially in Black and brown communities, are traumatized by their experiences.

Trauma leads to stress, which leads to acting out. Some young people are having a very difficult time. You see the high rates of suicide with young, especially young African American teenagers. There’s a lot of mental health trauma that is associated with the environmental factors of being poor. And it’s a moral disgrace that we don’t look out for our children — that we don’t address the environmental factors and the social determinants of their lives. Because you have to do that to make sure children don’t get stressed out or have breakdowns or end up getting shot or end up in juvenile hall. That could lead to some terrible outcomes.

First, I think that every family should be guaranteed a universal income. No one should have to live below the poverty line. And we certainly have enough resources in this country to guarantee income. Second, we should have universal preschool for every child. We should make it affordable or free. Third, we should focus on food security in terms of either increasing SNAP benefits or some type of strategy that addresses food deserts and makes sure that food is easily accessible and healthy.

We need to support Medicare-for-all: universal affordable health care. I think single-payer would be a heck of a lot more comprehensive in terms of addressing health care for children. We need to make sure that our child care workers are trained, that they have benefits and are unionized.

We should start valuing the dignity of all human beings and setting up policies that provide for a basic standard of living, which we do not do in this country.

One of the things that’s striking to me about that list is that we already do a huge amount of that for seniors. There is Medicare, a universal health care program. There’s Social Security, which looks a lot like a universal basic income for seniors. The people who work with seniors through Medicare are very highly trained.

We have this much more social democratic system for seniors, which we should, but we somehow have not expanded almost any of that to children, or, for that matter, parents of children. Why do you think there’s been so much more success extending this kind of policy to America’s elderly and not to American children?

First, I think we need to do more for seniors. We still haven’t totally stepped up to what we need to do for people in the twilight of their lives.

I think we have to talk about values, the values of human life and human dignity, regardless of how old you are. The Children’s Defense Fund and other organizations have been very active lobbyists for children, but I don’t see the type of money being put into lobbying for legislation that directly would lift children out of poverty that I have seen over the years when it comes to our senior citizens. And thank goodness our seniors have an active lobby in Washington, DC, through AARP and other senior groups.

I think it all has to do with valuing human life and human dignity. There are some who just don’t think children deserve what they need at the beginning of their lives so that they can move forward and be productive human beings and live healthy lives and take care of themselves. So many are denied that opportunity.

One of the policies the report emphasizes that people may not be as familiar with is a child allowance: a universal basic income for kids. And the report finds that a $2,700-a-year child allowance would singlehandedly cut child poverty by a third. That’s a big effect. And it’s something that a lot of European countries have. Could you talk a bit about that as a policy option?

This is a guaranteed paycheck. When you have a child allowance such as this, then you have the resources to help you pay for child care or help pay some of your utility bills, or help you buy more food. And when you look at the cost-benefit analysis, it actually reduces the amount of taxpayer dollars that go for the social safety net. So it makes a heck of a lot of sense for me.

I think we’re going to have to get to that point in this country. I really believe that. It’s going to be a political battle … they’re going call us all kinds of names. But who cares? We’ve got to take care of children and our families.

The End of White Politics by Zerlina Maxwell

Say It Louder! by Tiffany Cross

The Supreme Court’s role in economic policy, explained
The founder of Bonobos was supposed to help reinvent Walmart. Two-plus years later, he’s leaving.
Finland’s new parliament is dominated by women under 35
Michael Cohen now wants to get out the vote
Jeff Bezos and Elon Musk want a Mars colony to save humanity
Mike Pence is the normal Republican conservatives miss