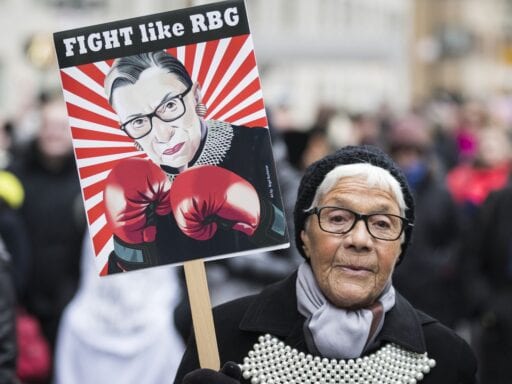 With Ginsburg gone, Roe is more at risk than ever.

Justice Ruth Bader Ginsburg was one of the Supreme Court’s strongest champions for abortion rights. Her death on Friday at the age of 87 throws the future of those rights into doubt.

Ginsburg always maintained that the right to an abortion was key to women’s autonomy. In her dissent in the 2007 case Gonzales v. Carhart, for example, she called it “a right declared again and again by this court — and with increasing comprehension of its centrality to women’s lives.” And though her view did not carry the day in that case, which upheld a ban on so-called “partial-birth” abortion, she was a crucial bulwark on the Court against any direct assault on Roe v. Wade, the landmark 1973 decision that established abortion rights in America.

Now that bulwark is gone. If President Trump is able to appoint Ginsburg’s replacement, he will likely give conservatives on the Court the votes they need to overturn Roe, or at least to weaken it beyond recognition.

The result will be an acceleration of what is already happening around the country: a two-tiered system of abortion, in which the procedure is accessible in blue states (and for people who can afford to travel) and out of reach everywhere else.

For many reproductive rights advocates, that’s a dark future. But it’s also one they’ve been anticipating for years, as state-level restrictions made abortions harder and harder to obtain. And they’ve been preparing — with abortion funds that help people travel across state lines, as well as advocacy around self-managed abortion, allowing people to terminate their own pregnancies with medication outside of a clinical setting.

The end of Roe will have major legal consequences. But advocates on the ground have already seen what a post-Roe world looks like, and are getting ready for everyone to live in it.

During his 2016 campaign, Trump promised to appoint Supreme Court justices who would overturn Roe. And when he made his second pick, Justice Brett Kavanaugh, generally seen as an opponent of abortion rights, conventional wisdom held that conservatives had the votes to reverse the decision.

But others were more doubtful. In anti-abortion circles, some believed that conservatives would actually need more than a 5-4 majority for something as momentous as reversing Roe.

Indeed, the first major abortion case to come before the Trump-era Court, June Medical Services v. Russo, was a disappointment to abortion opponents. Rather than delivering the rollback of Roe that some were hoping for, Chief Justice John Roberts sided with the liberals on the Court this year to overturn a Louisiana law requiring abortion providers to get admitting privileges at a local hospital. The case brought by the state of Louisiana was exceptionally weak, giving conservatives on the Court little to work with, and the ruling certainly left open the possibility of future challenges.

But it was a signal, for some, that the Court wasn’t yet ready to tackle Roe. A big obstacle to doing so was Ginsburg. One of the staunchest liberals on the Court, she was a lifelong advocate of women’s rights, and saw the right to an abortion as crucial among them.

“This is something central to a woman’s life, to her dignity,” she said in response to a question about abortion during her 1993 confirmation hearing. “It’s a decision that she must make for herself. And when government controls that decision for her, she’s being treated as less than a fully adult human responsible for her own choices.”

Now that advocate is gone, probably to be replaced by a justice of Trump’s choosing. And another abortion case, Food and Drug Administration v. American College of Obstetricians and Gynecologists, concerning whether patients should be able to obtain abortion medication by telemedicine during the pandemic, is already before the Court. With Ginsburg gone, that case, or another like it, could easily become a vehicle to overturn Roe.

Abortion-rights advocates have been preparing for this moment for years

As Vox’s Ian Millhiser has noted, Roberts in his concurrence on June Medical Services v. Russo made clear that while he could not support the state of Louisiana’s claim in that case, he was open to challenging Roe on other grounds. In addition to FDA v. American College, laws requiring an ultrasound or waiting period before an abortion, or limiting abortion for reasons of Down syndrome diagnosis, for example, have been challenged in lower courts and could make their way to the Supreme Court in future. And as many have pointed out, any case involving abortion could potentially serve as a vehicle for the Court to revisit Roe.

When it does so, minus Ginsburg and plus a potential third Trump appointee, it may well overturn the decision, or weaken it so much that states essentially have carte blanche to restrict abortion out of existence.

That will have serious consequences for patients, all of whom currently have, at least in theory, the legal right to an abortion in their state.

But it will also be a continuation of something that’s been happening for years. Since 2010, when Republicans took over many state legislatures around the country, states have passed hundreds of restrictions on abortion. While they haven’t banned the procedure outright, these restrictions have closed dozens of clinics across the South and Midwest. Louisiana, where the June v. Russo case originated, has just three clinics. Six states, including Kentucky, Missouri, and Mississippi, have just one.

Due to the lack of clinics in many places, as well as laws mandating waiting periods and other restrictions that make abortion more time-consuming and expensive for patients, the procedure is already all but out of reach in many red states, especially for people of color and low-income patients who can’t afford to travel long distances.

But in these states and around the country, abortion rights advocates have responded by creating abortion funds to help patients access the procedure, including traveling across state lines. The New Orleans Abortion Fund, for example, has helped more than 1,500 patients since it was started in 2012. Other groups are working to break down legal barriers to self-managed abortion, so that patients who cannot access a clinic can do the procedure themselves with medication.

Many of these efforts ramped up as the Court was considering June v. Russo, in anticipation of a potential defeat for abortion rights. They amped up further during the pandemic, when it became harder than ever for patients around the country to travel to a clinic and to afford an abortion in the midst of an economic depression.

“The kind of organizing, the deep rapport-building and trust-building between different funds and practical support network that’s come out of this pandemic, has made us stronger and more prepared for whatever comes on decision day,” Elizabeth Gelvin, client and community coordinator at the New Orleans Abortion Fund, told Vox in advance of the June v. Russo decision.

This work has likely prepared advocates, too, for the potential end of Roe.

Such a decision would unquestionably bring serious new challenges. In the wake of a reversal of Roe, anti-abortion advocates could push for a full nationwide ban on abortion, putting it out of reach even in blue states. Meanwhile, laws criminalizing self-managed abortion in several states, like Arizona and South Carolina, make this option risky for many, even though experts say that medically, it’s often very safe.

But reproductive rights advocates around the country are channeling Ginsburg’s memory now, and vowing not to give up.

“Ginsburg’s ethos was greater than just the law,” Fatima Goss Graves, president of the National Women’s Law Center, said in a statement Friday. “She was an icon and a living symbol of a north star, so we must unite and do for her what she did for us — fight for what is right.”

The challenge of disaster relief
Mobile, Alabama, high school football game shooting: what we know
Tolkein wrote Lord of the Rings to procrastinate on the academic work he was supposed to be doing
YouTube has a big climate misinformation problem it can’t solve
Democrats’ increasingly narrow path for winning back the Senate, explained
US tops world in coronavirus cases, Boris Johnson has Covid-19: Friday’s coronavirus news