What Klobmentum says about women running for president 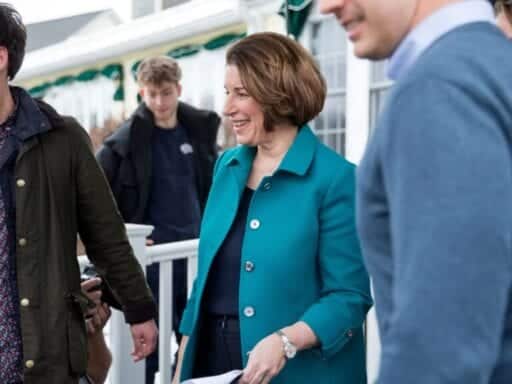 The way Klobuchar calls out sexism hasn’t gotten her punished for it — yet.

At least, that’s one narrative coming out of the New Hampshire primary, where the senator made an impressive showing, coming in third behind Bernie Sanders and Pete Buttigieg — and beating one-time frontrunners Joe Biden and Elizabeth Warren.

The result capped a week of good news for the Minnesota senator, including a post-debate fundraising haul of $2.5 million in just two days. Klobuchar’s path to the nomination is still uncertain, and her dismal support among black voters is likely to hurt her in other early primary states, like South Carolina. But her rise — and the ways she’s been able to point out gender bias without triggering backlash — may say something about what it takes to win favor as a woman running for president in America today.

In the runup to 2020, an enormous amount of the Democratic primary conversation has focused on who can beat President Trump. That’s led to a lot of questions in the media and among some voters about whether female candidates are “electable” or not. Many political scientists say the whole concept of “electability” is flawed — after all, Trump was widely seen as unelectable until he got elected. Still, the fear that women can’t win keeps coming up. “Perhaps we’re so risk-averse right now that it becomes harder for people to think that a woman is electable,” Farida Jalalzai, a political science professor who studies women leaders, told Vox.

Research also shows that American voters “believe that women candidates are more liberal than their male counterparts,” Jalalzai said. That bias may be hurting Warren, especially among those worried about nominating someone who’s too far to the left. Klobuchar’s centrism, by contrast, may work in her favor. Meanwhile, Klobuchar has also shown a facility for pointing out sexism on the campaign trail in a way that hasn’t backfired on her — yet.

If she’s able to actually hang onto frontrunner status, Klobuchar will face a level of scrutiny that’s hitherto been reserved for the top contenders in the race. And that scrutiny may include a level of gendered criticism that has held other female candidates back.

Klobuchar is surging (though it may not last)

Just a few weeks ago, Klobuchar was seen as a decidedly second-tier candidate, finishing fifth in the Iowa caucus. But she impressed many at Friday’s debate in Manchester, New Hampshire, coming out swinging at Buttigieg for his lack of experience on a national stage and closing out the evening with a pledge to Americans: “If you have trouble stretching your paycheck to pay for that rent, I know you. I will fight for you.”

Strong polls and fundraising numbers had people talking about “Klobmentum” going into Tuesday night’s primary, and the senator didn’t disappoint, coming in third with nearly 20 percent of the vote.

Meanwhile, Warren, the female candidate once considered a frontrunner for the nomination, posted a disappointing fourth-place finish in New Hampshire amid a broader sense that her campaign is faltering.

That doesn’t mean Warren is out, or that the Klobmentum won’t be short-lived. For one thing, in a national poll conducted earlier this month, the Minnesota senator had the support of precisely 0 percent of black voters. A possible reason, Elie Mystal writes at the Nation, is that while she leans heavily into her Midwestern roots on the campaign trail, “her version of the Midwest is heavy on the salt-of-the-earth stories about the white working class, and light on the unique challenges facing black and brown voters living in downtowns from Cleveland to Milwaukee.”

Iowa and New Hampshire are heavily white states, but in South Carolina, Nevada, and elsewhere, Klobuchar will have a lot of work to do convincing voters of color that she’s the best candidate for them.

And she may not be able to do so with the tactics she’s used so far.

No matter what happens, the contrast between Warren’s path and Klobuchar’s is notable

Still, it’s notable that Klobuchar seems to be surging when Warren is struggling. Among Democrats, there seems to be a palpable fear of nominating someone “too liberal to be competitive,” Jalalzai explained. That fear could be hurting Warren. Even though the Massachusetts senator is, to some degree, more centrist than Sanders, it’s possible that “some people may support a more liberal man for the job, versus a more liberal woman.”

Warren’s difficulty finding a foothold in the race so far is about more than her gender. She’s competing for progressive voters with Sanders, whose appeal is “sticky,” as Debbie Walsh, the director of the Center for American Women and Politics at Rutgers University, put it to Vox. “Once people are with him, they’re really with him,” she said, and “peeling people away from him is tough.”

But since she’s running as a moderate, Klobuchar isn’t competing with Sanders in the same way. She’s also less likely than Warren to be seen as too liberal to win.

Then there are the ways in which the two candidates and their campaigns have pointed out sexism in the race. Warren faced intense backlash after it was reported — and she confirmed — that Sanders had, in a 2018 meeting, told her he didn’t think a woman could win in 2020 (Sanders denies this).

Klobuchar hasn’t gotten the same kind of blowback when she’s noted, multiple times, that a female former mayor would be unlikely to be taken seriously as a presidential candidate in the way Buttigieg has been.

“Pete is qualified to be up on this stage, and I am honored to be standing next to him,” Klobuchar said during a November debate. But, she added, “women are held to a higher standard. Otherwise we could play a game called name your favorite woman president, which we can’t do because it has all been men.”

The comment simply didn’t get as much attention as Warren’s account of the Sanders meeting, in part because Klobuchar wasn’t a frontrunner at the time. But it also showed that Klobuchar has the ability to perform the kind of rhetorical acrobatics that experts say are unfortunately often necessary to point out sexism without being penalized for it.

Women in positions of power are often forced to carefully calibrate their behavior to avoid being perceived as too authoritative and therefore “unlikable,” Joan C. Williams, a law professor and expert on gender in the workplace, wrote at the New York Times last year. They “must often do a masculine thing (which establishes their competence) in a feminine way (to defuse backlash).”

Klobuchar’s efforts to point out sexism displayed a similar fine calibration: She called out her competitor but was sure to praise him while doing so (“I am honored to be standing next to him”). And she has used the conversation about Buttigieg’s lack of experience to lift up her own credentials, noting that she has won multiple statewide races and carried districts Trump won in 2016, Walsh said.

That ability to bring up gender bias while also making the conversation about her own strengths — and praising her opponent into the bargain — might stand her in good stead in a time when, as Walsh put it, female candidates who call out sexism are still perceived as playing “the gender card.”

But it’s also possible that, if Klobuchar is able to solidify her frontrunner status for any length of time, she’ll face the same kind of scrutiny Warren has. And it’s unsettling but true that to continue bringing up sexism could hamper her rise. The senator could “end up losing some of the momentum that she’s been able to build up lately, if she then talks to a large extent about the discrimination women face,” Jalalzai said.

There’s also a dynamic infamous among people who cover gender in politics, in which voters say they want “a woman, just not that woman.” To some degree, any woman who vies for the presidency becomes “that woman,” someone who’s too flawed and too “unlikable” to succeed. In 2016, some voters were dissatisfied with Hillary Clinton and wished Warren would run instead. But now that Warren is running, she has faced some of the same “likability” questions Clinton did.

Despite early reports that she mistreated staff members, Klobuchar hasn’t yet faced the likability question in the same way Warren has. But if she becomes a true frontrunner in the race, she’ll be “that woman.” And only time will tell how she, and the American people, will handle it.