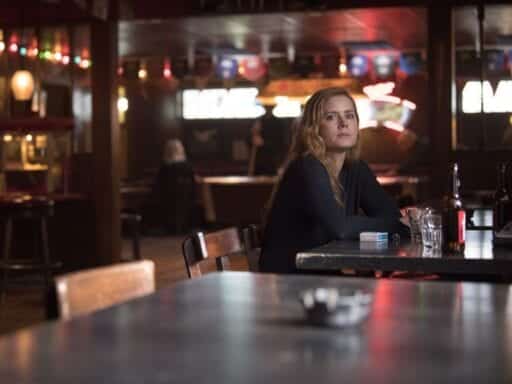 This new Amy Adams vehicle might seem slow. But it’s teaching you how to watch it.

There are so many good reasons to recommend Sharp Objects, HBO’s new eight-part miniseries adaptation of the Gillian Flynn novel of the same name. (I’ve seen seven of those parts.)

For starters, Amy Adams is ferocious as Camille, a journalist who returns to a hometown streaked with memories of sorrow to investigate the disappearance of a young girl, who vanished in a fashion eerily similar to how another girl disappeared a year before. (The other girl was later found dead.) Adams plays Camille as a scab no one can stop picking, least of all herself, and the deeper the show digs into her demons, the more thrilling it is to watch the actress at work. Adams has certainly played darker roles on the big screen (think of The Master, for instance), but she’s primarily known as a sunny, comedic presence. Sharp Objects lets her go way, way against type, to her benefit, as well as the show’s.

The rest of the cast is terrific, too, especially Patricia Clarkson, as the mother who haunts Camille’s memories like a monster under the bed, and Eliza Scanlen, as the teenage half sister who Camille doesn’t know. And that’s to say nothing of the huge collection of actors both well-known (Elizabeth Perkins, Chris Messina, etc.) and less well-known (Sydney Sweeney, recently of The Handmaid’s Tale; Taylor John Smith), who drop in for gutsy, lived-in performances.

I could also recommend the direction by Jean-Marc Vallée (the director of Big Little Lies), who finds a haunting beauty in the way that Camille and her female relatives can’t stop haunting one another in the same house. Or the writing, by a team headed up by showrunner Marti Noxon (of Buffy and UnREAL fame) and Flynn, which takes its time unfolding the several layers of small-town mystery alongside its deeper and deeper exploration of Camille’s character. My fondest hope is that Adams returns to this character again and again, with this team, similar to how Helen Mirren redefined her career in the British series Prime Suspect.

But none of the above is what I want to single out about Sharp Objects. What makes Sharp Objects work so well is the editing.

Sharp Objects jumbles up the past with the present, in a way that’s intoxicating

In the miniseries’ fifth episode, during which Camille attends a local festival that unpacks the assorted personal and political traumas of Wind Gap, Missouri (her hometown), she refers to a heroic teenage girl from the Civil War era as her “great great great great grand victim.” It’s a joke both about how long the town has embraced as a patron saint this woman — who married an adult man as a teenager — without thinking about the darker implications of her life, and about the legacies of trauma that run richly through Camille’s family.

And it’s indicative of the Sharp Objects approach to telling stories about those traumas. The past juts up against the present in the series, with memory literally writing itself over what’s actually happening. Camille might open a door and look into a room to see how it appeared 20 years ago — or to view the specter of someone long dead who continues to haunt her.

This is, to be sure, central to the show’s scripts, since it’s so keyed into deeper themes of Sharp Objects: confronting the parts of your past that you haven’t dared think about and realizing the frailties of your parents and yourself. But I was taken by the way the show presents this visually, through its images and by the way the editing (also by Vallée) juxtaposes the images.

If I have a complaint about Sharp Objects, it’s that the first few episodes move a little slowly, as Camille reluctantly re-submerges herself in the town she thought she had escaped. (It’s rarely clear to me why exactly her newspaper editor thinks sending her back to her hometown will help her confront her trauma, when it’s eminently clear the town is at the root of it.) But the deeper I got into the season, where the potboiler of a plot starts to heat up, the more I realized that these episodes are there to teach the audience how to watch the show.

The fine editing is present in the elegant way the entire miniseries opens, with a bike ride that takes Camille from the 1990s past to the 2010s present, transitioning gracefully between her younger self (played by It’s Sophia Lillis, a dead ringer for a young Adams) and Camille as she is right now. It leaps from a girl who was not yet damaged to a woman who is unable to escape the things that happened to her. But then it asks if there was any way for that girl to avoid becoming that woman, when the fruit of her family tree was so poisonous.

Thus the editing proceeds throughout the project, as Vallée intercuts brief snippets of images that might later make sense. They function as reminders of the ways Camille’s mind has fractured the world into pieces and forced her to ignore so many of those pieces, the way she simply must move forward at all costs, which means sloughing off those traumas like dead skin. And yet she can never wholly avoid or ignore them. They’re always there, brief splinters in her consciousness, jarring her awake.

There’s much more I could talk about in Sharp Objects — if nothing else, it’s a surprisingly trenchant commentary on white, rural America’s inability to escape its own fictional version of its past. But to say too much more about its plotting or its characters would spoil some of its pleasures, which unfold languidly and methodically, but always with purpose, always with a sense that Camille is standing athwart bigger and bigger waves that always threaten, to drown her.

And it’s the editing that best suggests those waves, in split seconds at first, then with longer and longer shots, until it can seem as if Camille and the show with her have become unmoored in time. It’s difficult to tell this kind of a story and not utterly lose the audience. But Sharp Objects’s touch remains delicate throughout, thanks to its gifted lead, its beautiful writing, and, yes, its laser-sharp editing.

Sharp Objects debuts Sunday at 9 pm Eastern on HBO. Look for weekly recaps of the show from Vox writers Alex Abad-Santos and Aja Romano after every episode.

Jared Kushner is trying to sell his Middle East plan at a conference in Bahrain
Chris Collins drops reelection bid after being charged with insider trading
The 13 Democrats running for president and everything else you should know about 2020
How police unions became so powerful — and how they can be tamed
Vox Sentences: NATOhhh no...
The US and Mexico will temporarily close their border