What Maxine Waters actually said about the Chauvin trial 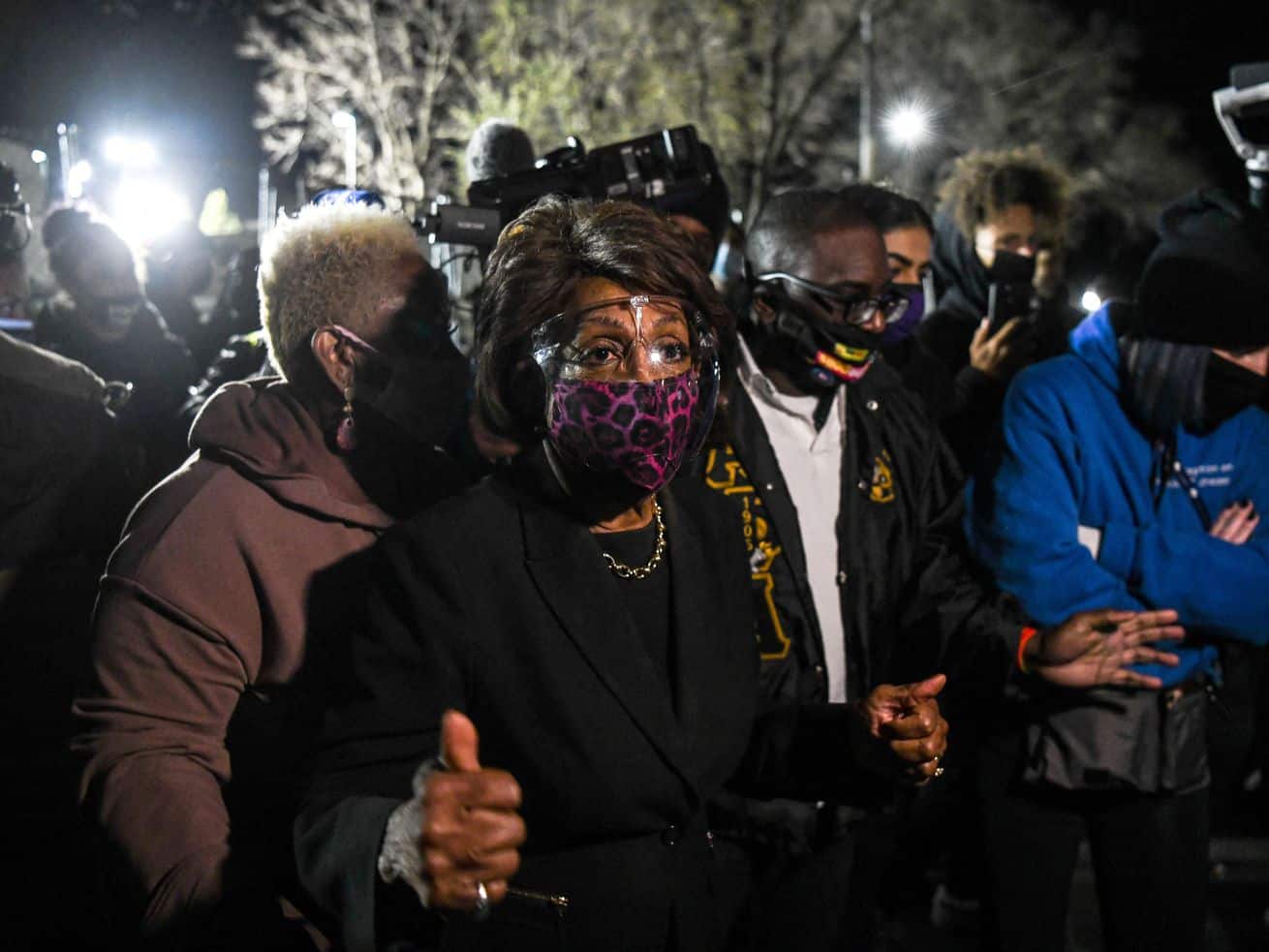 She didn’t tell anyone to riot.

Closing arguments in Derek Chauvin’s trial for the murder of George Floyd wrapped up Monday, and after the jury was excused to begin deliberations, Judge Peter Cahill had some tough words — for Rep. Maxine Waters (D-CA).

While attending a protest in Minneapolis on Saturday, the longtime Congress member and chair of the House Committee on Financial Services said she thought Chauvin needed to be convicted of murder and urged protesters to “get more confrontational.”

These comments received enormous attention in conservative media — with critics distorting Waters’s comments to claim she had encouraged protesters to riot if they didn’t like the verdict. (Waters’s actual comments fell far short of that, and she insisted in a subsequent interview that she was “nonviolent.”)

“I just don’t know how this jury can really be said to be that they are free from the taint of this, and now that we have US representatives threatening acts of violence in relation to this specific case, it’s — it’s mind-boggling to me, Judge,” defense attorney Eric Nelson said in requesting a mistrial.

“I’m aware that Congresswoman Waters was talking specifically about this trial, and about the unacceptability of anything less than a murder conviction, and talk about being ‘confrontational,’” said Judge Cahill. “I wish elected officials would stop talking about this case, especially in a manner that is disrespectful to the rule of law and to the judicial branch.”

Cahill denied the mistrial request, saying the jury had been told to avoid media coverage and he didn’t think jury members would be prejudiced about Waters’s comments. He also opined that “a congresswoman’s opinion really doesn’t matter a whole lot.” But he mused to Chauvin’s attorneys, “I’ll give you that Congresswoman Waters may have given you something on appeal that may result in this whole trial being overturned.” (On Tuesday afternoon, House Democrats blocked an attempt by Republicans to censure Waters, in a vote that broke down on party lines.)

Those on the right have exaggerated, distorted, and opportunistically spotlighted Waters’s remarks. She didn’t tell anyone to riot. However, the larger context here is that Waters has long believed, as have many on the left, that comfortable, privileged Americans are too willing to turn a blind eye to violence against Black people and other marginalized communities — and riots are, if not justified, at least an understandable response.

Moderates and conservatives, meanwhile, have long argued that some on the left have been reluctant to fully condemn or work to prevent unrest that can result in death, injury, or financial ruin. This decades-old discourse was revived amid the unrest that followed Floyd’s killing in May 2020, and as the Chauvin verdict looms and cities fear new violent protests, it’s now back on the agenda.

While attending a Black Lives Matter protest in Minneapolis on Saturday night, Waters responded to questions about the unfolding trial. She repeatedly said protesters should “stay in the street” and “fight for justice.” She said she was looking for a guilty verdict for Chauvin — and for murder, not merely the lesser charge of manslaughter. Asked again what protesters should do, she said the following:

Video of her remarks went viral, particularly among conservatives, who asserted Waters was urging protesters to riot if Chauvin was not convicted of murder. “Maxine Waters is inciting violence in Minneapolis,” House Minority Leader Kevin McCarthy tweeted.

The “incitement” accusation is vastly overstated. Waters didn’t address or direct a crowd in a speech, she spoke off the cuff to questioners, and her comments only went as viral as they did because conservatives made them viral.

While Waters made clear she wanted a guilty verdict, it’s not clear her advice for protesters was contingent on a “not guilty” verdict. One questioner used that framing, but Waters said she couldn’t hear him, and her eventual answer was in response to the broader question of “What should protesters do?”

All of this will sound familiar because of President Donald Trump’s second impeachment trial, during which Democrats accused Trump of incitement of insurrection in part because he gave a speech with confrontational language, urging his supporters to “fight” just prior to their storming of the Capitol.

To argue such language was common in politics, Trump’s defense attorneys pointed to examples of many Democrats, including Waters, making similar comments. But Democrats argued that the speech was the culmination of Trump’s months-long, multipronged effort to overturn the results of a legitimate election. They fully admitted politicians often use the word “fight” in a rhetorical or metaphorical way.

The larger context here is that cities are “bracing” for large protests and possible violence if Chauvin gets acquitted, along the lines of the unrest that occurred in various cities after George Floyd’s killing last summer. About a dozen people died during the unrest, in a mix of situations, many more were injured, and there was over $1 billion in property damage by one estimate.

Most politicians have tended to speak out against such violence, with many Democrats viewing it as obviously politically counterproductive to demonstrators’ aims (or, perhaps, to their own political fortunes). “Protesting such brutality is right and necessary. It’s an utterly American response,” Joe Biden tweeted days after Floyd’s killing last May. “But burning down communities and needless destruction is not. Violence that endangers lives is not.”

Many with further left views were conflicted over how to respond, though. There has been a strain of thinking on the left that riots motivated by racial injustice are “the language of the unheard,” to quote Martin Luther King Jr. — and that understanding and sympathy, rather than condemnation, are called for. And Waters has long held this belief.

In the aftermath of the Los Angeles riots of 1992 — riots that took place after police officers who badly beat a Black man, Rodney King, were acquitted, and in which more than 60 people died — then-freshman Rep. Waters specifically said she was not going to tell people to “cool it,” adding, “The fact of the matter is, whether we like it or not, riot is the voice of the unheard.” (Later that year, she called the unrest “not acceptable” but “understandable.”)

Waters’s core view that many in the US are too comfortably willing to excuse injustice against marginalized people, and that more aggressive protest tactics are often needed as a result, surfaced again in 2018. During the controversies over the Trump administration’s family separation policy, Waters again endorsed public (nonviolent) confrontation of Trump Cabinet officials, and a very similar cycle of controversy to the current one ensued.

“If you see anybody from that Cabinet in a restaurant, in a department store, at a gasoline station, you get out and you create a crowd, and you push back on them,” Waters said at a rally that year. “And you tell them they’re not welcome anymore, anywhere. We’ve got to get the children connected to their parents.”

The stakes in 2018 — about whether Trump officials could eat in DC restaurants without getting yelled at — were pretty low. But people can and do get killed and badly injured in riots, and property damage that big corporations can shrug off can ruin small business owners. (In Los Angeles in 1992, for instance, Koreatown was hit hard.)

Conservatives argue that there has been a broad tendency on the left to downplay or excuse this behavior, without regard for its victims. Last summer, Trump’s team tried to associate the violence in cities with Democrats, as part of a strategy to blame the party for disorder more generally (including attacks on activists’ support of “defund the police”). Biden won, but some moderate Democrats concluded these attacks made the party underperform in Congress. And Republicans will doubtless hope to use a similar playbook in 2022, as Democrats’ narrow majorities in both houses of Congress hang in the balance.

Beyond the point about unrest, others have objected to Waters’s insistence that only one outcome in the trial — a guilty verdict of murder for Chauvin — is acceptable, saying that government officials should consider Chauvin innocent until proven guilty. The video of Floyd’s death has been publicly available since last year, and the trial arguments have been well-aired, so Waters can say she was expressing her opinion based on that.

But the criticism is that such statements from public officials in particular jeopardize the right to a fair trial and risk interfering with that trial — the latter of which is a criticism Democrats often made of Trump as he opined on his associates’ trials during his presidency.

And as for Judge Cahill’s hope that politicians would “stop talking” about what the verdict should be? President Joe Biden subsequently said Tuesday that he was “praying” for “the right verdict” and that he thought the evidence was “overwhelming.”

Exclusive: A new Senate plan would guarantee paychecks for workers who are furloughed or laid off
The case for prosecuting the Sacklers and other opioid executives
Welcome to the July issue of Vox’s The Highlight
If Trump won’t concede, these activists have a plan
Bernie Sanders narrowly leads Joe Biden in a national ranked-choice poll
Why Spotify and a casino bought The Ringer and Barstool