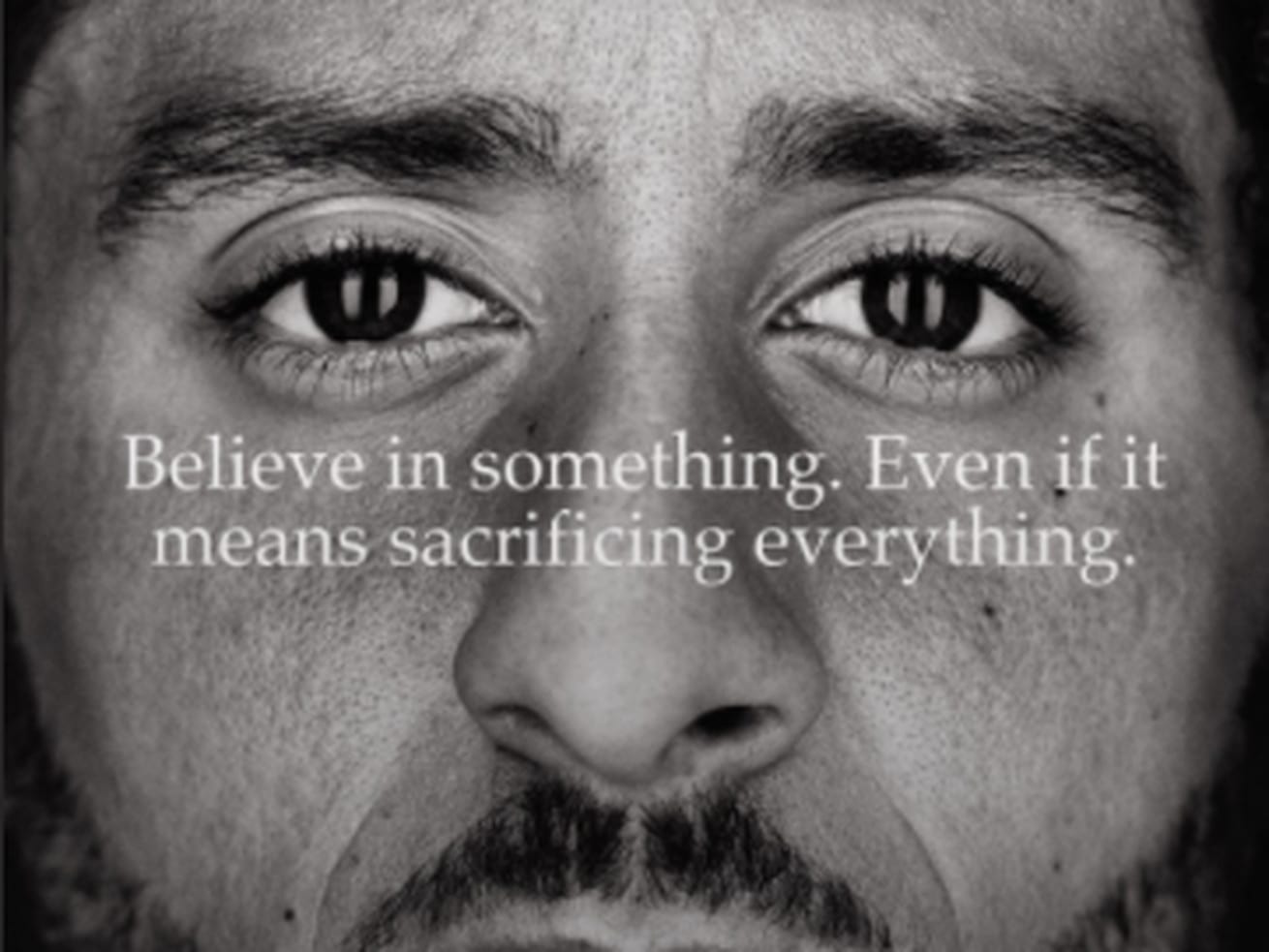 An Alabama pastor cut up his Nike gear at the pulpit.

Pastor Mack Morris wanted to take a stand. Preaching in front of his Mobile, Alabama, congregation on Sunday morning, positioned just to the left of an American flag, he declared that he was sick and tired of the way clothing brand Nike had, in his view, disrespected America and its people.

“The first pair of jogging shoes I wore were Nike jogging shoes,” he told his congregation, “That was in the early ’80s. I’ve been wearing Nike jogging shoes since 1980. I got news for you. I’ve bought my last pair of Nike shoes.” He produced two branded items — a Nike wristband and a headband. Then he cut them up right there at the pulpit.

Morris’s actions are part of a larger trend among conservatives in recent weeks who have been destroying Nike products to protest its selection of controversial quarterback Colin Kaepernick — who famously knelt during the national anthem to protest police brutality — in its latest ad campaign. For Kaepernick’s critics, including President Donald Trump, his refusal to stand for the national anthem is evidence that he lacks respect for the American flag, and more broadly, for America itself.

Since he began his protest, Kaepernick has been dropped from the San Francisco 49ers and has not been signed to a team. He has brought a formal complaint against the NFL alleging it and team owners colluded to keep him out of the league. Nike’s ad campaign explicitly references Kaepernick’s activism; its slogan, emblazoned over a photograph of Kaepernick’s face, exhorts viewers to “Believe in something. Even if it means sacrificing everything.”

Morris’s conflation of his pastoral role with conservative politics is a powerful symbolic act. It reveals the virtually unprecedented degree to which white evangelical theology, and an extremely narrow (white, conservative) understanding of “patriotism,” have converged in the post-Trump age. White supremacy, evangelical identity, and a distinctively Christian form of nationalism have combined.

Right-wing internet phenomena, bolstered by Trump’s own tweets, have found their way straight to the pulpit. For the 75 percent of white evangelicals who still supported Trump as of this spring — the last time a poll of that scale was undertaken — racial politics and religious identity are inseparable.

Furthermore, Nike’s own branding choices have contributed to this latest battle in the culture wars mark an intensification — and complication — of that trend. Consumer culture is becoming yet another way in which Christian nationalism, or opposition to it, play out.

Morris was explicit about the reasoning behind his actions. After cutting up his Nike products, he continued his sermon by implying that Kaepernick’s activism was prompted by a desire to win advertising dollars. “Colin Kaepernick … just inked a contract with Nike. Nobody knows and nobody’s telling how many multi-million dollars that is going to be simply because he does not want to stand when the national anthem is sung.”

He concluded, “America may not be the best country in the world and we’ve got a lot of faults, but I’m telling you what, a lot of folks died for the sake of what that flag represents.” (Morris has not returned a request from Vox for comment).

Our Soundman just cut the Nike swoosh off his socks. Former marine. Get ready @Nike multiply that by the millions. pic.twitter.com/h8kj6RXe7j

Other conservative protesters, like country singer John Rich, not to mention plenty of anonymous #MAGA Twitter accounts, have publicly destroyed Nike gear, often posting the results online. But by doing it from a pulpit, Morris made a bigger statement: Preserving the so-called integrity of the American flag — and ignoring the issues of police brutality and racism underlying the football players’ protests — is inherently a white, evangelical Christian issue.

John Fea, a professor of history at Messiah College in Pennsylvania and author of Believe Me: the Evangelical Road to Donald Trump, told Vox in a telephone interview on Thursday that Morris’s actions represented a combination of two elements. The first, he said, was “conservative evangelicals’ commitment to the idea that America is a Christian nation, and that somehow the American flag not only symbolizes generic nationalism but that the nation was founded by God, that it’s a nation created by God. So [people think], how dare Colin Kaepernick take a knee.”

These ideas, Fea said, have existed throughout American history. But Donald Trump’s campaign and election have them to the fore. Furthermore, he said, we’re seeing an unprecedented relationship between the president and the evangelical religious establishment, in which pastors take “marching orders” from Trump’s own discourse.

“So you now have Baptist pastors in the South in essence taking their cues from the president of the United States … and not from Biblical ideas,” Fea said.

He argued that there was a direct trickle-down effect from Trump’s tweets to church pews. Trump’s relentless focus on Kaepernick made his protest into a national controversy. White evangelicals, in turn, followed Trump’s lead, treating Kaepernick’s protest as a direct affront to the sanctity of an (implicitly Christian) America.

Fea said that the Kaepernick case is specifically about ideology, not theology. After all, he said, the Bible says nothing about flags or protests.

Certainly, Trump and his administration, more widely, have actively sought to capitalize on Christian nationalist rhetoric for political ends throughout Trump’s campaign and presidency. In stoking comparisons to the Biblical king Cyrus, moving the American embassy in Israel to Jerusalem, and having evangelical allies like Paula White and Robert Jeffress imply that Trump was “chosen by God,” Trump and his administration have used the language and imagery of Christian nationalism to stoke their evangelical base.

The fact that the controversy over Kaepernick is taking place in the sporting arena only intensifies these complicated cultural factors at play.

Fea says that sports culture traditionally has involved striking demonstrations of national (and religio-national) identity. “They’re one of our best windows into nationalism,” he said, and “into our relationship between Christian faith and nationalism.”

There’s a longstanding tradition in America of conflating sporting prowess and religious identity. When it comes to American football, the field is a particularly charged space for these ideas about nationality, ethnicity, and religion to play out. As theologian and professor Randall Balmer wrote in 2001 in the progressive Christian magazine Sojourners, “the sports stadium has replaced the church sanctuary as the dominant arena of piety at the turn of the 21st century, especially for American men.”

Within that paradigm, Morris’s actions make a certain kind of symbolic sense. The “sacred” arena of the football stadium, and the “sacred” flag, have, perhaps to Morris and his parishioners, been profaned by Kaepernick and his fellow protestors. By cutting up the Nike gear within an explicitly religious space, Morris is highlighting just how close the worlds of church and stadium really are.

Last year, I argued that corporations were, increasingly, becoming the arbiters of public morality. More brands are working to profit off expressing social and political values. (As researcher and executive director at On Being’s Impact Lab Casper ter Kuile told me, “Meaning-making is a growth industry.”)

That might mean brands like Nike are actively working to monetize Kaepernick’s protest to appeal to a liberal target audience. It might, conversely, mean a restaurant chain like Chick-fil-A funding groups opposed to same-sex marriage, and in so doing appealing to a conservative, Christian consumer base. As America becomes increasingly culturally fractured and divided, different corporations are taking different approaches to corner individual, and often opposing, markets.

Fea pointed out that the fact that there’s a Nike controversy at all is a sign of just how much religious and national identity in America has changed. You couldn’t have a branding strategy like Chick-fil-A’s or Nike’s, he said, in the religio-social environment that dominated America for much of its history, precisely because the idea that America was a “Christian nation” — and that patriotism and Christianity were intertwined — was taken for granted. “Everybody would have said in 1930, that if you don’t stand for the national anthem you’re being unpatriotic. There would be nobody upset about a company upholding traditional marriage.”

It was only after the culture wars of the 1980s — in which evangelical leaders like Jerry Falwell ushered in the rise of the “Moral Majority” as a GOP-allied political force — that weighing in, say, on same-sex marriage or the national anthem could become part of the way consumers expressed their identities.

It is because identities and values aren’t taken for granted that acts of conspicuous consumption (or, in Morris’s case, conspicuous destruction) become so appealing. By buying or destroying Nike headbands, consumers can feel that they are literally “buying into” an identity that may not actually be that stable or fixed to begin with.

Likewise, it’s the very instability of the white evangelical identity in today’s diverse religious landscape that makes Kaepernick’s protests so threatening. Because so many white evangelicals feel that their role in America is under siege, perceived slights against the notion of Christian patriotism take on an outsize effect.

Of course, Fea said, you might expect a Christian pastor to rail against what some might see as a distinctly un-Christian message: co-opting racial injustice for financial gain. Instead, he noted, we’re seeing the opposite.

At ultra-conservative evangelical Liberty University, for example, which is known for its institutional support for Donald Trump, president Jerry Falwell Jr. announced last Friday that the university was considering canceling its merchandising deal with Nike if it genuinely supports Kaepernick’s protest. On the other hand, if it was “just a marketing ploy?”

“We will probably overlook it,” Falwell said.

Networks of self-driving trucks are becoming a reality in the US
Drake’s new album Scorpion matches Springsteen and surpasses Taylor Swift on the charts
The biggest stories headed into the 2020 Grammys
Vox Sentences: The caravan reaches Mexico
Why experts are worried about the FDA’s approval of convalescent plasma for Covid-19
A leaked State Department memo opposes a bill that would resettle Syrian refugees in the US