What “Ouija” actually means, and how the game has changed 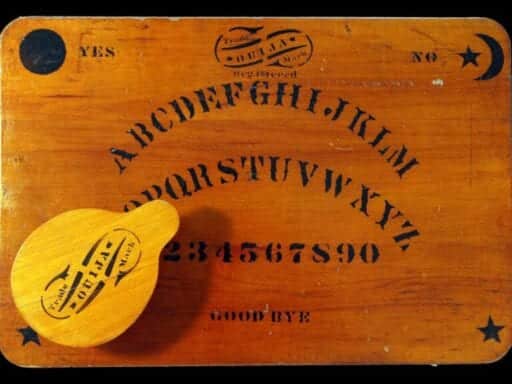 If you’ve ever hovered over a Ouija board, you may have wondered, “What does ‘Ouija’ mean?”

The board game, which uses movements of people’s hands on a small device to send a “message from beyond,” is still a popular toy. But its history is less well-known, so I asked someone to help me understand the layered meanings of Ouija: Robert Murch, who has the unique distinction of being a Ouija expert. As the chair of the Talking Board Historical Society, he served as a consultant on the 2014 horror movie Ouija and recently celebrated his passion at the inaugural OuijaCon.

It turns out that the real meaning of “Ouija” is as pliable — and mysterious — as the game itself.

Ouija was an outgrowth of a real spiritualist movement

A sincere spiritualist movement arose in the second half of the 19th century. As Americans dealt with a changing country, life in the wake of the Civil War, and other drastic changes, some sought answers in a spiritual — but not traditionally religious — realm.

It was significant from the 1860s on, David Nartonis writes in his history of the spiritualist movement’s growth. Via the lecture circuit, seances, and other activities in which people attempted to talk to the dead, spiritualism became a significant cultural force. In 1868, for example, there were no less than 150 lectures on spiritualism advertised in the Spiritual Telegraph newspaper. That fad led to lots of unique business opportunities.

Ouija was just one of many talking boards of its era

“Talking boards existed years before Ouija,” Murch says. Some pre-1886 Ouija boards looked like Ouija boards, and some didn’t. Murch says early versions featured different ways of receiving messages. Some used dial plates, in which you pressed your hand on a device and the pressure directed a needle to different letters. Other fortune tellers relied on knocking sounds on the bottom of a table to convey messages.

Some devices even used planchettes (that’s the name for the thing you hold when you operate a Ouija board. Myth says it’s named after a French medium, but it’s a word for a small board dating back to medieval France). Often, these early planchettes had a hole so a pencil could write the answer.

The inventor of the 1886 Ouija board remains disputed — some credit a cabinetmaker named E. C. Reiche, while others say it was Charles Kennard. The most common belief is that Reiche sold his invention to Kennard, though it’s hard to know for sure (Reiche later claimed it was stolen). “According to Kennard,” Murch says, “he came up with the idea while sitting in the kitchen of his new house.” Kennard said he placed a breadboard on the table and held a teacup over it, the same way you’d hold a planchette over a Ouija board. As he watched his hand move, he realized he’d found a way to access his subconscious.

Though we don’t know the inventor, we do know that the Ouija board, made and sold by Kennard and his colleague Elijah Bond, represented a step forward for talking boards. Its design — an arc of letters, a planchette, and handy “Yes,” “No,” and “Goodbye” prompts — was unique.

Their board’s name was unique as well, with a surrounding mystical myth. That name came courtesy of Helen Peters, Elijah Bond’s sister-in-law. She had a reputation as a medium, so on April 25, 1890, she had a session in Baltimore with the entrepreneurs and the board. According to the letters and journals of the group, they asked the board what it wanted to be called. It spelled out “Ouija.” When they asked what it meant, it spelled “Good luck.”

Did Ouija’s name come from the board? A misread locket? Or both?

But there’s also a more practical — and market-driven — explanation for the Ouija name. After the name “Ouija” was “sent” to the participants on that April night, Peters revealed she was wearing a locket that she claimed had “Ouija” written on it. “One of the theories of the locket,” Murch says, “is that Helen Peters was a well-read upper class woman. She likely read stories from English novelist Ouida. We believe she might have been wearing a locket that had ‘Ouida’ on it, and it’s possible that ‘Ouija’ was in her subconscious.”

There was also an exotic appeal to the name, which was meant to sound Egyptian. When the game earned a patent in 1890, it was as an “Egyptian luck board.” Egypt was in vogue in some spiritualist and performance circles (in 1888, to take one example, “Professor Canaris, Wizard of the North” bragged about the “Egyptian necromancy” in his show).

We can’t know for sure whether Ouija was a genuine expression of spiritualist beliefs, an Egyptophilic piece of flimflam meant to capitalize on those beliefs, or a little bit of both. But eventually, Ouija’s name took on an even broader meaning.

By 1901, after a few other transactions where Ouija production changed hands, entrepreneur William Fuld secured the rights to sell the hit board. He’d already gotten a patent for his own talking board, but Ouija was a mainstream hit that he coveted.

“William Fuld took over,” Murch says. “And he realized it didn’t matter what you called it if you bought it.”

“By the 1920s, people were using more slang,” Murch says, “and if you were playing the board, you were Ouija-ing.” Boards were changed to reflect that, and some even read, “If you call it we-ja or wee-gee, it still spells good fun.” The board still had mystical cachet, but it was no longer solely a mysterious spiritualist message or an allusion to a forgotten Egyptian god — it was also a game to be played with family and friends.

And that’s the meaning of Ouija that’s stuck since, especially after the sale of Fuld’s business — and Ouija — to Parker Brothers in 1966. That same year, it outsold Monopoly. Today, the board symbolizes everything from retro gaming to the scary movie that bore its name. And that’s probably appropriate. Ouija always did what we wanted it to, so it’s fitting that “Ouija” means what we want it to as well.