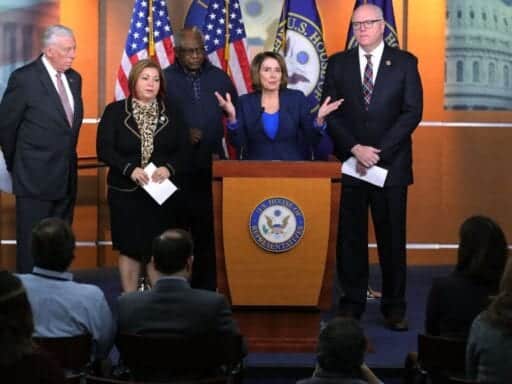 Her fundraising prowess and past legislative accomplishments aren’t enough to overcome deeper grievances.

Commentators have wondered why some House Democrats seem eager to oust Nancy Pelosi as the leader of their party. They rightly note that she is a tireless campaigner, has raised huge amounts of campaign money, and has an impressive track record as a legislative leader. Wouldn’t it hurt the party to replace such a successful leader, and a woman leader at that?

Many congressional Democrats — probably a majority — would say yes. But those who would not have understandable reasons for seeking a replacement. In fact, their grievances are rooted in two central goals of lawmakers: winning election and exercising influence in the legislature. How Pelosi’s leadership intersects with those goals helps explain anti-Pelosi sentiment among certain members of her party, and why many Democratic candidates are noncommittal about supporting her as leader.

The first grievance is rooted in perhaps the single most important desire of incumbents and would-be legislators: to be elected. Party leaders are expected to help, not hurt, their party’s chances of winning and keeping majorities in Congress. But while Pelosi is a lucrative fundraiser and a relentless advocate for her party, House Democrats have a poor track record of winning majorities under her leadership.

Of the 16 years that Pelosi has served as the top leader of House Democrats, the party has been in the majority for just four years. Worse, she was speaker of the House when Democrats lost their majority in 2010 — a 63-seat loss that was the largest suffered by the party in more than seven decades. While many have compared Pelosi to Speaker Sam Rayburn, the long-serving Democratic speaker in the mid-20th century, a better analogy may be Joe Martin, a Massachusetts Republican who was speaker just twice during his two decades leading the House GOP.

Pelosi’s critics have argued that her reputation as an outspoken liberal and legislative activist has hindered Democrats’ ability to win swing districts. A strong case can be made that other factors are more at fault — such as gerrymandering, the quality of Democratic challengers, and President Obama’s approval ratings — but that is unlikely to assuage the frustrations of legislators stuck in the minority. As I have written elsewhere, being in the minority can be a deeply discouraging experience for members of the House, and it is not uncommon for them to blame their status on party leaders.

This year, Pelosi’s impact on the election of Democrats has been made especially salient by Republicans running an enormous number of attack ads tying her to Democratic candidates. There’s no sign that the ads are having the desired effect, but it’s also reasonable that many of those Democrats are trying to nullify those attacks by distancing themselves from Pelosi. This in turn serves as further evidence for her critics that she is not helpful to the party’s electoral chances.

There is a second reason that some Democrats are unhappy with Pelosi: a lack of opportunities in their caucus. Pelosi and Minority Whip Steny Hoyer have held the same top two posts for more than a dozen years, clogging the upper rungs of the leadership ladder. It’s the longest time that the same two individuals have occupied the highest positions in the caucus since the 1950s, when power was far less concentrated within leadership.

In addition, Pelosi has a well-earned reputation for rewarding her friends and punishing her enemies. I have previously argued that Pelosi’s propensity to enforce personal loyalty might help her consolidate power in the caucus, but it could also breed discontent among those whom she disfavored, especially if they are denied opportunities for influence.

This discontent is felt mostly by incumbents. But Pelosi’s long tenure has also led some younger candidates in largely Democratic districts, seeing Pelosi as emblematic of the party’s old guard, to refrain from endorsing her. In April, for instance, the eventual Democratic nominee for the Third District of Massachusetts, Lori Trahan, complained that there was no clear plan to determine Pelosi’s successor; she still will not commit to voting for her as leader. Other new candidates in Democratic districts who will not unequivocally endorse Pelosi include Jahana Hayes (CT), Alexandria Ocasio-Cortez (NY), and Rashida Tlaib (MI).

Pelosi has the upper hand … for now

Despite these pockets of resistance, Pelosi seems to have the upper hand. For one thing, no one has officially declared their candidacy for leader, leaving her unopposed. She has also contributed money to many candidates for Congress, helping solidify their support. Also, while scores of Democratic candidates have not endorsed her for leader, most have not promised explicitly to vote against her, and it’s unclear how many will get elected in the first place.

Meanwhile, within the House Caucus, opposition to Pelosi appears to be deep but not broad. A quixotic proposal from her opponents to change the party’s rules, increasing the vote threshold for leader, suggested that they did not represent the majority of the caucus. It was endorsed by fewer than a dozen Democrats.

Pelosi’s position may be further strengthened if Democrats do well in the upcoming elections, as Jonathan Bernstein has argued. But Doug Harris and I note in our forthcoming study of congressional leadership races that a key mediating factor is lawmakers’ expectations for an election. If the party wins the majority but by a narrower-than-expected margin, many more Democrats may be convinced that she harms their chances of winning at the polls.

To be sure, Pelosi may take credit for a larger Democratic wave. But why would her opponents accept that at face value if she is not also to be held responsible for past electoral losses? They are more likely to suspect that they are being “rain made.”

In fact, Pelosi has taken several steps that suggest her position within the party is not as strong as it once was. She has made several concessions to her critics, delaying leadership elections until December and implying that her tenure is coming to an end (though perhaps not until a Democrat is elected president). And it should be noted that while she won her last contested election for leader, in 2016, a third of the caucus voted for her opponent — the largest since she was first elected to a leadership post in 2002.

In the short run, the safe bet is on Pelosi remaining her party’s leader in the next Congress, and perhaps even becoming speaker again. But until she can convince discontented Democrats that she will help, not hurt, their efforts to win elections and exercise influence, she will continue to face resistance within her party — and the danger that, eventually, she will face a challenger who can marshal enough votes to defeat her.

Matthew Green is a professor of political science at Catholic University.

10 Things I Hate About You is as fresh as ever, even 20 years later
The Trump administration admits there’s no timeline for North Korea to give up its nukes
The FBI released records on Carter Page surveillance. It thought he was being recruited by Russia.
Susan Collins, one of the most important swing votes on Kavanaugh, explained
Bill Cosby sentenced to 3 to 10 years in prison for 2004 assault of Andrea Constand
Francis Fukuyama recommends 2 books on tribalism in politics