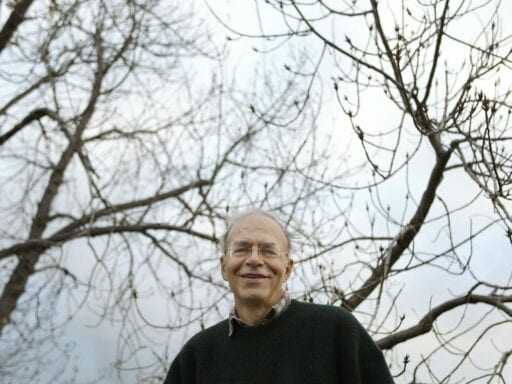 In his new book Why Vegan?, the pioneering philosopher of animal rights takes stock of the movement’s progress — and why there’s so much work left to do

Forty-five years ago, Australian philosopher Peter Singer published the book Animal Liberation. The arguments it made — that animals can suffer; that it is morally wrong to inflict extraordinary suffering upon them; and that we consequently have to rethink our farming and food systems — are ones that many consumers today will have heard.

At the time, however, Singer’s perspective was a deeply unusual one. There were animal advocacy groups, certainly, but they tended to focus on the plight of abandoned pet animals, like cats and dogs, with no major organization working on the plight of farmed animals (more on this below).

In a 1999 New Yorker profile, journalist Michael Specter wrote that Singer “gave birth to the animal-rights movement.” Singer’s book, activist Ingrid Newkirk wrote, “was a philosophical bombshell. It forever changed the conversation about our treatment of animals. It made people — myself included — change what we ate, what we wore, and how we perceived animals.” Simply put, the animal welfare movement would not be where it is today without Singer and his book.

Now, 45 years later, he’s revisiting the topic in a new book — a collection of his essays called Why Vegan?, released for sale in the US last week. I spoke with Singer about the history of the animal welfare movement, what progress we’ve made since Animal Liberation came out, and what it will take to change the world he’s been criticizing for nearly half a century now.

This transcript has been edited for clarity and brevity.

You first wrote about the case for caring about animals 45 years ago. What has changed?

A lot has changed, really. There has been a huge amount of change in awareness. Quite frankly, there is an animal movement now, which is concerned about all animals, not just about dogs and cats and horses.

And there really wasn’t in 1975. It’s not that there weren’t sort of tiny organizations. There were so many vivisection organizations [which work to combat the practice of animal vivisection for research], actually. But in terms of farm animals, there was really nothing going on. There was a small organization called Compassion in World Farming in the UK when I got into it, which is now a sort of quite large global organization. But it was run by one guy out of his home, I think, at the time, and there was no legislation to protect the welfare of farm animals.

Now, the entire European Union has prohibited some of the worst forms of confinement that I described in Animal Liberation. And so has the state of California. And I think six or seven other states in the US also have legislation protecting farm animals. So that’s a big change.

Then there’s a huge change in the availability of vegetarian and vegan food. Nobody would have known what vegan meant in 1975. There was this very small British organization that was founded in the late ’40s, called the Vegan Society. That was probably pretty much all of the vegans in the UK. And virtually none in the US either. There’s been a huge growth of awareness — organizations like People for the Ethical Treatment of Animals, to courses in animal law being taught at Harvard. There was none of that happening at all [in 1975].

So that’s an immense amount of change. But there hasn’t been nearly enough change in the way we treat animals.

There’s change, maybe, in people’s interest in the issue and how we think about it, but still a pretty bad situation on the ground, and in some ways getting worse, right? Because we have more automation, we have more technology. We’ve bred birds differently.

Yeah, the breeding of chickens in particular is a really bad aspect of it. They grow faster, they put on weight faster, and they seem to be in more pain just standing up now. That’s one difference, which you’ve written about.

The other thing that I would say is — it isn’t bad that China and a lot of other countries are more prosperous. That’s great because there are fewer people in extreme poverty. But there are also hundreds of millions more people wanting to eat meat, [previously] unable to afford to eat meat. And China, in particular, has no national laws about animal welfare at all. The multiplying factory farms, what conditions the animals undergo — they’re pretty terrible. When you go to China, you see [animal abuses] that are pretty horrible you wouldn’t see here in the US.

I’m also curious about the philosophy side of this. Are the arguments that you put forward 45 years ago still what you see as some of the strongest arguments for animals?

I think the arguments that I put forward in 1975 are still the basic arguments, which seemed to me the most cogent. So what happened after I wrote Animal Liberation is that a number of different philosophers use different approaches. [American philosopher] Tom Regan’s animal rights argument, for example, wasn’t really in the literature beforehand, not in the form that Tom put it in, and a variety of other different views. [Regan argues that from a Kantian perspective, at least some animals have intrinsic rights as humans do, because they are what he called “subjects-of-a-life.”]

So there is more pluralism about different approaches, philosophically, that lead to somewhat similar conclusions. But I remain a consequentialist. [There are] rights-based approaches — for those who like that approach … [they] are out there, and that’s a good thing. Martha Nussbaum’s capabilities approach comes to a similar conclusion as well. [Nussbaum’s approach argues that ethics should be focused on the freedom to achieve well-being, and understood in terms of how many real opportunities to do that someone has.]

I have seen it said that animals mattering, and being of moral significance — and accordingly, factory farming being very bad — is something of a rare area of agreement in moral philosophy.

Yeah, absolutely. And even people who disagree on some of the points, like Roger Scruton, who died recently, was a conservative, British philosopher. Some sort of religious bent, I think, because he talked about [how] we should have piety towards animals. He certainly continued to eat them, and even champion eating them, but he certainly opposed factory farming.

I’m curious what you see as the strongest, simply put argument for being vegan.

I think that it removes you completely from complicity in practices that are not morally defensible about the raising and killing of animals for food.

There are more complicated arguments about whether you’re justified in bringing animals into existence who would not otherwise have existed and have a good life, about animals raised in suitable conditions and humanely killed. So you know, there are arguments for defending some forms of animal consumption. I don’t know what the impact of that is on attitudes to animals and whether it reinforces the idea that animals are still things for us to use.

Are you personally vegan?

Strictly speaking, no. For example, I don’t think that bivalves — mussels and clams — I don’t think they can suffer, so I eat them. I would certainly eat cellular-based meat, once it was available. And I’m not really strict about avoiding free-range eggs.

That’s been one of the struggles in our family, finding eggs that we are confident come from chickens who were well-treated.

Yes, that’s right. I think it’s somewhat easier to get genuinely free-range eggs in Australia [where Singer lives] than in big American cities anyway. It’s not always that easy to sort out which are labeled free range, but actually kept in big warehouses with small patches where they can go outside. In Australia they report the stocking density.

In 2020, of course, there’s lots of old arguments about animal farming that are still relevant. But there’s also some new sorts of concerns on everybody’s horizon — like the potential for pandemics and the potential for contributing to climate change.

The last essay in the collection is a 2020 essay about the origins of the coronavirus pandemic, flu, and whatnot. It talks about wet markets, and the combination of cruelty and health risk that involves.

When I published Animal Liberation, I was focused entirely on the animal aspect of it. Then, during the ’80s, I became aware of the climate change issue, and of the role of animal production in that. So there was a second major argument for avoiding animal products. When I talk to people who’ve become vegan in the last few years, I find climate has played quite a significant role.

And then in recent years, I’ve become aware of the risk of pandemics coming out of factory farming. So what I say in the book is — there’s now this third reason: animals, climate, pandemics.

The cost of an ad-free internet: $35 more per month
The LIFT Act, Kamala Harris’s newest big idea for 2020, explained
Theresa May lost the Brexit deal vote. Now she has to fight to keep her job.
Pompeo: Trump doesn’t want to bomb Iran’s cultural sites. Trump: Yes I do.
Vox Sentences: Decoding the Mueller report
How cricket went from an old British pastime to primetime entertainment for billions