What social solidarity demands of us in a pandemic 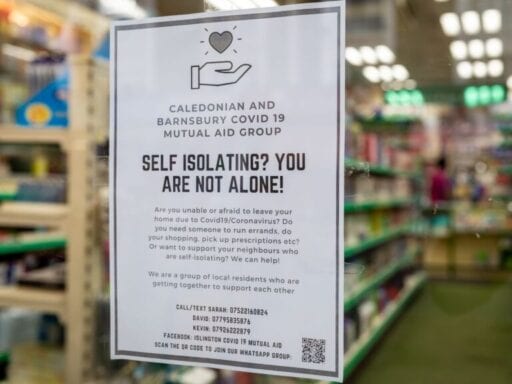 There is no doubt that social distancing is the best way to slow the spread of the coronavirus. But the efficacy of social distancing (or really any other public health measure) relies on something much deeper and harder to measure: social solidarity.

“Solidarity,” writes Eric Klinenberg, “motivates us to promote public health, not just our own personal security. It keeps us from hoarding medicine, toughing out a cold in the workplace or sending a sick child to school. It compels us to let a ship of stranded people dock in our safe harbors, to knock on our older neighbor’s door.”

Klinenberg, a sociologist by trade, is the director of the Institute for Public Knowledge at New York University. His first book, Heat Wave, found that social connection was, at times, literally the difference between life and death during Chicago’s 1995 heat wave. Since then, he’s spent his career studying trends in American social life, from the rise of adults living alone to the importance of “social infrastructure” in holding together our civic bonds.

This conversation on The Ezra Klein Show is about what happens when a country mired in a mythos of individualism collides with a pandemic that demands social solidarity and collective sacrifice. It’s about preventing an epidemic of loneliness and social isolation from overwhelming the most vulnerable among us. We discuss the underlying social trends that predated coronavirus, what kind of leadership it takes to actually bring people together, the irony of asking young people and essential workers to sacrifice for the rest of us, whether there’s an opportunity to build a different kind of society in the aftermath of Covid-19, and much more.

In a lot of disaster scenarios, isolation is a risk factor but is not related to the disaster itself. With coronavirus, the primary advice we’ve all gotten is to socially distance from one another. And for the groups that already tend to be more isolated — like the elderly or the sick — these measures are even more intense.

How do we think about a situation where the isolation isn’t a problem we need to solve, at least not in its first dimension, but an actual recommendation we’re being given?

It’s very tricky. In the 1995 heat wave in Chicago it was social isolation that made you most at risk of dying. Hurricane Katrina was like this as well: What you needed to survive was some social contact. Now, we have a situation where we’re being told not to have the kind of social contact that was protective in other crises.

The message of social distancing seems to be a little bit off to me. There’s no question that the way we get through this collectively and individually is to maintain physical distance and minimize exposure to people. All of us need to shelter in place and stay at home as much as possible to get through this.

But for me that’s about physical distancing more than it is about social distancing. I’ve been frustrated with this language of social distancing because it seems to imply that we’re only going get through this if we turn our backs on one another — and especially turn our backs on the people who are most vulnerable. The only way we’re going to be able to take care of and protect the people who are truly in need is if we build up or draw on whatever stock of social solidarity we still have.

I think that term social solidarity is really important here. Could you define it?

Emile Durkheim, one of the founding figures of sociology, talked about kind of the contrast between “mechanical solidarity” — the idea that we have affinities for other people around us based on a kind of a simple in a shared identity or shared attachment to a place — and “organic solidarity,” which came from the recognition that we are all interdependent.

For me — and for the sociological tradition that I am steeped in — solidarity is the idea of recognizing, honoring, and sustaining the bonds of interconnection and the ties of interdependence that allow us to flourish. It’s about being in it together.

Something that has struck me in this crisis is the very rapid demand for a truly painful sacrificial level of social solidarity from people — say, retail workers or young people — in a society that has not often extended very much solidarity to them.

Our social safety net for low-income workers pales in comparison to Scandinavia or Western Europe or even Japan. Or, thinking about it generationally, we are far behind our peer countries in taking steps to address climate change. In both cases, you see a lot of countries that have had more of an ethos of solidarity before coronavirus hit.

Here in America, we have not performed all that well on some of these measures. And then all of a sudden we are seeing a lot of insistence on very high levels of social solidarity and social sacrifice. And it strikes me that there is a tension there between the amount of solidarity we nurtured in the easier times and what we are demanding and will continue to have to demand in harder times.

I think that’s completely essential to understanding the failure of the United States to respond to coronavirus. This is clearly a story that begins with a total failure of leadership in the White House, but it also comes down to the question of solidarity. We are so accustomed to acting on our own — doing what we want when we want to do it. And we are so distrustful of the way that the state treats us that we don’t have the reserves of solidarity to draw on that we see in other places like Japan and South Korea and Germany and Scandinavia.

I think this is a major issue because it’s social solidarity that determines whether you send your children to school if they’re sick in the early days of a pandemic. It’s social solidarity that tells you not to fight through your cold and go outside when there’s not a ban on outdoor activities. And, as you scale it up, it’s that solidarity that determines whether you live in a state that provides things like universal health care or paid sick leave or guaranteed sick leave for workers.

When you need people to make compromises and deep sacrifices in their personal life for the good of the collective, you need some sense of a collective to draw on.

One thing that is just incredibly striking to me about this moment is here we are in this country that does not have a great history of solidarity, and that has a deep and, at times, crude individualism laced through our national mythos. And the political leader we have in charge is quite possibly the least versed in a rhetoric and an ethos of solidarity as can be imagined. He is himself an icon of American individualism.

I thought you gave a very useful definition of solidarity earlier, but I think I would put part of it differently. I think solidarity is often the view that we recognize that there are going to be differences between us — differences in who we are or how we look or what we believe — but that in fundamental ways we are going to ignore those differences when it counts.

At some point you just have to be able to say, “You’re a Democrat and I’m a Republican. But right now, we’re both Americans.” You don’t need to do that every day. But we’re in this moment that requires a lot of bridging of genuine difference and disagreement because it is a moment in American politics with a lot of disagreement. And yet what we have is a president who knows very little but fracture.

I think this is a serious concern. We have a president who has refused to even honor the notion of a shared America — of a common project. From the beginning, his impulse has been to mock and to taunt and to insult and demean the political opposition — to an extent that we maybe haven’t seen since the Civil War.

And we see it even during this pandemic situation. You see it in the insults to governors of states if they’re from another party. You see it beneath the rhetoric about what California’s doing or what New York is doing or what Michigan is doing. And it’s terrifying because if there’s ever been a moment where we needed to be unified — unified such that I decide to stay at home because I’m concerned about you and I’m concerned about us — a pandemic situation is that moment. It’s a moment like this where we see the extent to which our fate is linked — where my well-being hinges on yours.

I think we’re now at a moment where we have no choice but to try, despite the policies and rhetoric that’s coming from the White House. But I think that’s going to be a much harder job than it would be under really any other president I can think of.

How to keep the smart speaker you got for the holidays and still keep some of your privacy, too
Joe Biden and the Green New Deal
2020, in 7 minutes
Justice Sotomayor is poised to lead the minority wing of the Supreme Court
The crisis isn’t too much polarization. It’s too little democracy.
NYC is investigating Amazon for firing a worker who protested coronavirus working conditions