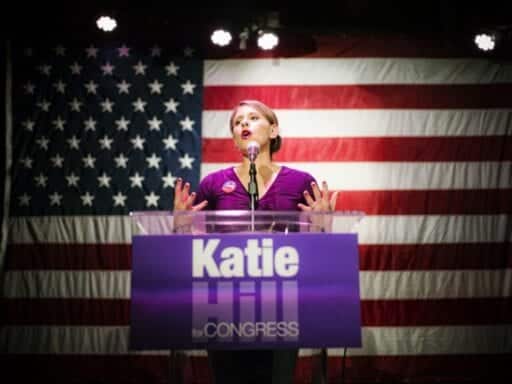 What happened to Hill could discourage other women — especially younger and LGBTQ women — from seeking careers in the public eye.

When Rep. Katie Hill, the California Democrat who announced her resignation on Sunday, admitted to a sexual relationship with one of her campaign staffers, she didn’t hesitate to call it “inappropriate.” Anti-sexual harassment advocates have long pointed out that employers having relationships with subordinates raises troubling issues of consent.

But the media coverage that led up to her resignation didn’t always focus on issues of consent or employer ethics. Instead, the Daily Mail, for example, chose to publish multiple nude photos of Hill, along with a variety of allegations that have nothing to do with relationships with staffers or misconduct of any kind. The website accused Hill of “posing nude on ‘wife sharing’ sites,” for example, something that has no bearing whatsoever on her job as a member of Congress.

In fact, the allegations against Hill only became public after nude photos of the Congress member were shared with the conservative website RedState without her consent. Hill says her husband, with whom she is in divorce proceedings and whom she has called abusive, is responsible.

Everything about Hill’s story, from the way it became public to the way the Daily Mail and other websites encouraged readers to examine her naked body, is inextricably tied to the fact that Hill is a woman. Sexual misconduct allegations against men like Sen. Al Franken or Rep. Blake Farenthold were generally treated as political issues, not salacious stories about people’s sex lives. (Both men ultimately resigned.)

“You cannot even imagine this happening with a male congressman,” Brianna Wu, a candidate for Congress in Massachusetts and advocate for privacy legislation, told Vox.

You all deserve to hear from me about why I made this devastating decision and where things go from here. I said the fight continues. I mean it, and I hope you’re with me. https://t.co/ogKkyW7I6f

Since the allegations broke, the focus has been on nude photos and salacious details — not ethical issues

The allegations against Hill first surfaced earlier this month, when the conservative website RedState reported that Hill and her husband, Kenny Heslep, had engaged in a two-year romantic relationship with a woman in her 20s who worked on Hill’s congressional campaign. RedState also published photographs of the women, including one that appeared to show Hill naked.

Where the official rules of the House of Representatives are concerned, the allegation about Kelly was more serious. Since last year, House ethics rules have prohibited sexual relationships between members of Congress and their congressional staff. The rules do not explicitly apply to campaign staff.

But for many outlets, the focus of the story was the naked pictures and the details of her relationships, not whether she violated ethics rules.

In particular, many outlets chose to focus squarely on Hill’s relationship with the female staffer, not on the allegations around Kelly. RedState published multiple stories on Hill’s supposed “throuple” (a term for a romantic relationship among three people that Hill herself has not used). Some even shared the purported photo of Hill and the staffer on Twitter, prompting the company to take the tweets down, according to the New York Times.

The epitome of the focus on Hill’s relationship with a woman, though, was probably a Daily Mail story published on Thursday. “Hill’s wild lifestyle has been laid bare in a cache of texts and intimate photographs obtained by DailyMail.com,” the website reported, “as sources revealed Hill and Heslep also posted her naked photos online under a thread called ‘WouldYouF**kMyWife.’”

The story also included multiple naked (though censored) photographs purporting to be of Hill, including several of Hill alone that had nothing to do with her relationship with the staffer. The story ranged far beyond the allegations of inappropriate relationships to talk about relationships she and her husband allegedly had before her campaign, in which there was no apparent suggestion of professional misconduct, as well as relationships the staffer allegedly had after her breakup with the couple.

The Mail is known for salacious stories about famous people — other recent headlines include “REVEALED: Liam Hemsworth ‘building new home’ next door to Miley Cyrus and Cody Simpson’s love nest …after ‘applying for a permit’ before their split.” Still, the story was revealing for its extensive focus on Hill’s body and sexuality, rather than on any of the factors in her history that have bearing on her fitness to serve in Congress.

Overall, coverage of the allegations against Hill has been highly sexualized. “She’s an attractive blond woman,” Wu said, “and there’s certainly a salacious aspect to it.”

Not only is Hill a woman, she is also one of the first openly bisexual people in Congress —her sexuality may also have influenced coverage of the allegations against her, especially the fact that the relationship with the female staffer has drawn more attention than the allegations of a relationship with Kelly. “This is, to some degree, about the sexualization of lesbian relationships,” said Wu, who is bisexual.

Even one of Hill’s Republican colleagues has said Hill was being treated unfairly. Rep. Matt Gaetz, a staunch Trump ally, tweeted on Thursday that Hill “isn’t being investigated by Ethics or maligned because she hurt anyone — it is because she is different.”

This is just absurd. The only person who seems to have a gripe is @RepKatieHill’s soon-to-be ex.

Who among us would look perfect if every ex leaked every photo/text?

Katie isn’t being investigated by Ethics or maligned because she hurt anyone – it is because she is different. https://t.co/Czrc2k8z8X

For example, Hill’s treatment is much different than that of Al Franken. In 2017, when radio host Leeann Tweeden said that then-Sen. Franken had kissed her without her consent and mimed grabbing her breasts in a photograph, people scrutinized the photo in question because it was a key part of the allegation (which was soon joined by several more). Media outlets didn’t promote scrutiny of Franken’s body or of his sex life outside of misconduct allegations.

Other male members of Congress who resigned after allegations like sexual misconduct, such as Blake Farenthold or Rep. John Conyers, also have not seen their bodies plastered across websites.

Of course, no one leaked nude photos of these men. But even in a case where a man’s nude photos did become public, at least one media outlet managed to make the story about a woman’s body, too.

In 2016, when former Rep. Anthony Weiner was accused (again) of sending nude photos to a woman not his wife, the New York Post published several of the images. But in the same story, it also published multiple photos of a woman Weiner had allegedly sexted. She was shown in her underwear, with her face blurred out. The headline: “Anthony Weiner sexted busty brunette while his son was in bed with him.”

The Post story is just another reminder of something Hill has now learned all too well — women’s bodies are used as clickbait in ways that men’s are not.

No discussion of the allegations against Hill is complete without an acknowledgment of how they came to light. According to Hill, photographs of her were shared without her consent. She has said her soon-to-be ex-husband is responsible. “The fact is I am going through a divorce from an abusive husband who seems determined to try to humiliate me,” she said in a statement to the Washington Post earlier this month.

Hill’s relationship with a campaign staffer raises serious ethical questions, and might have led to her resignation regardless of the manner in which it was revealed. But the release of the photos meant that Hill was also subjected to repeated invasion of privacy that had nothing to do with the public debate over her inappropriate relationship — her constituents and colleagues did not need to see her naked body to decide whether she should remain in Congress.

“For a lot of the men in Congress, the kind of electronic record of their sex lives simply did not exist in the same way,” Wu notes. For example, in 2018, the average age of a member of the House was nearly 58 years old.

Hill, however, is a millennial. Taking nude photos for private use is “something that is much more common for younger people,” Wu said.

Many fear that what happened to Hill could discourage other women — especially younger and LGBTQ women — from seeking careers in the public eye.

Young women today may be looking at Hill’s situation and thinking, “what if my ex-boyfriend publishes these pictures of me?” Wu said. “I think it has a really chilling consequence on who is allowed to run for office and who isn’t.”

Others have voiced similar concerns. “There’s so much that people do about women and their sexuality that’s about shaming them,” Sen. Kamala Harris, a candidate for the 2020 Democratic presidential nomination, told BuzzFeed News on Monday. The release of the photos of Hill “sends a signal to other women that’s discouraging them from running for office.”

Harris has sponsored a bill making the publication of intimate photos and videos a federal crime, according to BuzzFeed. Wu, meanwhile, says the publication of such photos should be seen as a privacy issue, and lawmakers need to work with tech companies on policies that would help contain nonconsensually shared images. “We’ve got to have a 21st century discussion about what privacy means,” she said.

“I have to take my personal fight outside the halls of Congress,” Hill said in a video statement released on Monday. “I will fight to ensure that no one else has to live through what I just experienced.”

She has a difficult road ahead of her.

Google just got access to millions of medical records. Here are the pros and cons.
The government officials who wrote the tax bill have new jobs as lobbyists
Trump first suggested North Korea wasn’t responsible for Otto Warmbier’s death. Now he’s walking it ...
Trump’s pick to chair new climate panel once said CO2 has been maligned like “Jews under Hitler”
Trump says he won’t commit to leaving office if he loses the election because of a “ballot scam”
Vox Sentences: Cuba not-so-libre