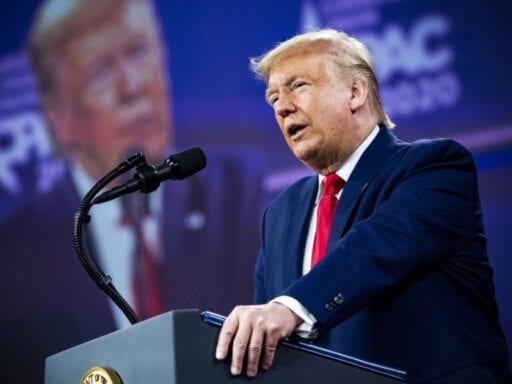 Share
Loading...
President Trump speaks at CPAC on February 29, 2020. Sen. Ted Cruz, Rep. Paul Gosar, and Rep. Doug Collins announced plans to self-quarantine after interacting with an individual infected with the coronavirus during the conference. | Saul Loeb/AFP via Getty Images

The three men most likely to win in November are in the demographic most at risk of complications from the virus.

Due to the coronavirus outbreak, America is now facing a troubling reality: Both the president and his top two rivals for the White House are at a particularly high risk of both contracting the virus and becoming seriously ill from it due to their ages and nonstop contact with the public.

According to the Centers for Disease Control and Prevention, older adults are “at higher risk of getting very sick” from Covid-19, as the disease caused by the novel coronavirus is formally called, than the general population is. As such, the CDC advises that older people should “stay at home as much as possible” to avoid contracting the virus.

President Donald Trump and his Democratic challengers former Vice President Joe Biden and Sen. Bernie Sanders are all over 70 years old. And as they sweep across the country on the campaign trail, they’ll be met with voters who want to shake hands, take selfies, or even rush the stage to protest while the candidates are speaking — all while working closely with large campaign teams. All of that combined puts them at a very high risk of contracting the virus compared to the general population.

And while the White House and the Biden and Sanders campaigns are beginning to recognize this reality and adjust the candidates’ campaign activities to try to minimize the risk, many experts worry they’re not taking the threat seriously enough.

Trump finally got tested for coronavirus — which the White House says proved negative. But he had been spotted shaking hands up close with supporters at fundraisers in recent days, despite guidance from the CDC advising those who are at high risk to put distance between themselves and other people.

Sanders has told reporters he’s too busy running for president to worry about coronavirus, even though he is at even higher risk of complications than the other two candidates due to his recent heart problems.

Sanders and Biden have taken some steps to address the threat of the disease: Both have canceled rallies in order to keep large groups from spreading it.

All three politicians insist they’re following the advice from medical experts, like keeping away from sick people, limiting close contact with others, and washing their hands often. Still, their instinct to act like politicians — greeting people, giving hugs, speaking in close quarters — is anathema to how they should act during the outbreak.

Put together, both the current president and the two people most likely to take his job next are overly exposed. That’s deeply worrisome, given the stakes here.

“Imagine if a candidate ends up in the hospital and dies,” said Ashish Jha, director of the Harvard Global Health Institute. “The psychological effect on the country [would] be massive. The candidates should be doing the right things for the country.”

How to protect presidential candidates from coronavirus

Jha recommended three major changes the candidates should adopt immediately to minimize their risk of infection and further spread of coronavirus.

First, candidates need to stop shaking hands and personally greeting potential voters. Of course, Jha acknowledged, “That’s really hard because that contact is fundamental for interacting with potential voters.” But he said it’s incumbent upon the candidates to explain to voters why they’re keeping their distance. “Blame the doctor that gives you that advice if you have to,” he insisted.

Second, campaigns should closely monitor members of the campaign team, especially those who come into most direct and daily contact with the politician. If a staffer shows any symptoms, they should be isolated and tested to see if they have the disease.

If they test positive, they should stay home mainly to recover but also keep those in the team — and especially the candidate — as far away as possible.

But even if they test negative, Jha told me, they should work virtually instead of physically until any main symptoms pass.

Third, candidates should rethink holding campaign rallies, and probably cancel all campaign gatherings. Even if those events don’t put the men personally at risk and they’re able to remain relatively isolated on a stage, for instance, large rallies could still increase the chance the disease will spread among attendees.

“It would be bad if any three of them got it”

It’s hard to get politicians to stop, well, being politicians — shaking hands, kissing babies, all that stuff.

But it seems the White House and the Biden and Sanders campaigns are trying to do what they can.

For instance, White House tourists now have to first disclose which countries they’ve traveled to within the past month before they’re allowed to enter the White House itself; security staff is likely looking to see if newcomers recently traveled to coronavirus hot spots such as China, Italy, and Iran.

People who pay to attend Trump’s fundraisers must now use hand sanitizer before posing for photos with the president, and the campaign canceled a three-day swing through Michigan, Ohio, and Pennsylvania that was supposed to start on Monday, likely in an attempt to curb the spread. The campaign, though, denies the decision had anything to do with coronavirus.

But it’s still not enough. Former Secret Service agents say that Trump, above all things, should keep away from rope lines full of supporters. “It’s the ultimate threat,” an unnamed former agent told the Washington Post on Monday. What’s more, the president should stay about 6 to 10 feet away from anyone who wants to engage with him during a campaign event.

“In any pandemic, the underlying principle is to restrict access,” Jonathan Wackrow, a former Secret Service agent, told the Post. Of course, whether Trump wants to do that is entirely his call. “If the president feels it’s necessary to do it, the president is going to do it. It’s the Service’s role at that point to make the environment as safe as possible,” Wackrow continued.

The situation is potentially even riskier for Sanders and Biden, who are continuing to do the same things Trump does but without Secret Service protection. It’s therefore likely they’re not receiving up-to-the-minute advice on whether to wade into a crowd or not.

And, as mentioned above, Sanders is potentially even more at risk than Biden because of his heart attack and subsequent heart procedure last year. So far, indications are that older people with heart conditions are at a higher risk of complications if they contract the coronavirus. “It would be bad if any of them got it,” Harvard’s Jha told me, “But Sanders is perhaps the most high-risk” of them.

Which means all three campaigns need to think hard about changing their ways going forward. It may require a restructuring of how to navigate a presidential race, but it’s what seems necessary right now — especially because of who these last three men standing are.

“It is going to take a lot of work to really focus on trying to keep these people safe,” Jha concluded.

Washington declared a public health emergency over measles. Thank vaccine-refusing parents
156 countries are teaming up for a Covid-19 vaccine. But not the US or China.
The missing puzzle piece for getting to 100% clean power
Why some people don’t tip their Uber drivers
The TikTok-Trump drama, explained
The Mueller report: what we know and don’t know