What to expect at the fourth Democratic debate 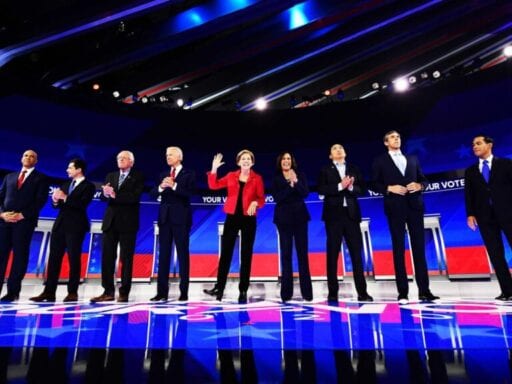 Can a candidate not named Biden, Warren, or Sanders have their breakout moment?

The fourth Democratic presidential debate — which will actually have more candidates onstage than September’s — will be on Tuesday, October 15, at 8 pm ET at Otterbein University, outside of Columbus, Ohio, and broadcast by CNN.

The New York Times will also be hosting the debate.

The debate will be a big moment for the three top-polling candidates: Former Vice President Joe Biden and Sen. Elizabeth Warren (D-MA) will take center stage, with Sen. Bernie Sanders (I-VT) flanking Biden. But there will also be nine other candidates onstage with them.

Going into the debate, all eyes will be on Warren, Sanders, and Biden — and whoever decides to go on the offensive against one of them, as Castro did with Biden during the third debate.

Before last month’s debate — which was the first to have all the top-polling candidates on one stage — Sanders and Warren teamed up for a two-on-one health care scuffle against Biden but didn’t really engage in any contentious back-and-forth themselves. It’s an open question whether that dynamic holds now that Warren, who has been consistently rising in the polls, has completely closed the gap with Biden. The two are essentially tied in the RealClearPolitics polling average in the field of 2020 Democratic contenders.

The debate will also be Sanders’s first campaign event after having a heart attack on the campaign trail and undergoing an emergency procedure to insert two stents. Press reports have amped up the pressure on Sanders to perform Tuesday night and show he’s able to continue his vigorous campaign style.

And hanging over this debate is a reinvigorated impeachment inquiry into President Donald Trump in Congress — one that puts Biden’s family at the center of Trump’s dealings with Ukraine.

The debate also could serve as a make-or-break moment for several other mid-tier candidates. Harris, Booker, and O’Rourke’s campaigns have all been struggling to gain momentum, and despite donors loving Buttigieg, the Indiana mayor also hasn’t seen much traction outside of a few state-level polls. The next debates have even stricter requirements; only eight have made the cut so far.

The state of the race, explained

It’s still a three-way race. Still months from the February Iowa caucuses, when the first Americans will be able to vote for one of the Democratic candidates, the Democratic presidential primary remains a three-way race between a veteran of mainstream Democratic politics in Biden and two of Congress’s most progressive firebrands in Warren and Sanders. The three remain far ahead of the rest of the field, though Warren has widened her lead over Sanders in national polls.

Warren has been having a very good run. Warren’s stock has been steadily rising since she jumped into the race, while her biggest challengers — Biden and Sanders — have been dipping or stagnant, respectively. This narrative had a symbolic peak last week when an early October Quinnipiac poll put her polling average ahead of Biden’s by 0.2 percent only for Biden to inch back ahead with the another poll. Warren held a 3-percentage-point lead ahead of Biden in the early October poll from Quinnipiac, with 29 percent of the support. Her numbers show that Biden’s longtime frontrunner status is certainly up for grabs.

It’s still early. That said, in many state polls all three top candidates remain within the margin of error of each other, and polling experts point out that this early on a lot still comes down to name recognition.

“We have basically had a tied race going back several months now,” Andy Smith, a pollster with the University of New Hampshire, told Vox. “People make up their minds at the very end.”

Buttigieg has been registering double-digits in some state polls, inching closer to Sanders in New Hampshire and Iowa. Sanders remains strong in California and Nevada where he’s in a statistical tie for first, and a recent CBS poll of early states put him in a tie in Iowa, as well. Meanwhile, the CBS poll showed Warren has surging ahead in New Hampshire, with 32 percent of support compared to Biden’s 24 percent and Sanders’s 17 percent. In South Carolina, however, neither Warren nor Sanders come close to Biden, who sits with a stronghold of 43 percent of support.

There isn’t a clear narrative even among the top three. Fundraising totals from the third quarter put Sanders in the lead, pulling in a whopping $25.3 million haul in three months, while Biden’s numbers are closer to entrepreneur Andrew Yang’s than to Warren’s or Sanders’s. Campaigns are still building out their ground games in crucial early states, where their coalitions are overlapping.

All of this puts the race in a state of flux, and although national and local polls put Warren, Sanders, and Biden at the top of the field, many of the same polls suggest voters have not yet solidly gotten behind a single candidate.

Underlying the top-line numbers are trends that tell us more about each candidate’s coalition. Biden wins overwhelmingly with voters over the age of 65 and with African American voters. Warren has won over white liberal college graduates, though she is making bigger inroads with minority voters. And Sanders is holding on to his working-class base and picks up nearly half of the youngest voters, who despite being known for lower voter turnout have been increasingly mobilized in recent elections.

The lesser-known candidates haven’t had standout moments yet

The Democratic field has slimmed in the past month. New York Mayor Bill de Blasio has dropped out, as has former Colorado Gov. John Hickenlooper, who has now decided he will challenge Republican Sen. Cory Gardner in the Colorado Senate race instead. Rep. Seth Moulton dropped out, as did Sen. Kirsten Gillibrand and Washington Gov. Jay Inslee, who has instead been elevated as Democratic candidates’ climate guru.

Going into the September debate, candidates like Bennet and Bullock both told the Washington Post that they weren’t deterred by being shut out of the event. But missing two debates will certainly be difficult for candidates with already low national name recognition.

The debates serve as an important opportunity for smaller campaigns to get their names and message out to the rest of the country. But in the three rounds — and five nights — of debates so far, none of the breakout moments have gone to lesser-known candidates. Instead, polling shows the Democratic primary increasingly looks like a three-way race between Biden, Warren, and Sanders.