What to expect at the sixth Democratic debate 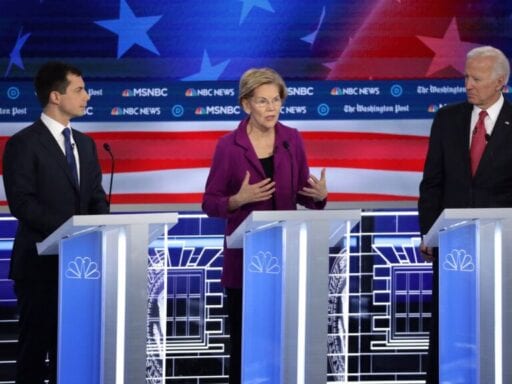 It’s the smallest debate stage yet.

The sixth Democratic debate — which will feature the smallest slate of candidates yet — is set to take place from 8 to 11 pm ET this Thursday, December 19, at Loyola Marymount University in Los Angeles.

The debate will be broadcast by PBS and co-hosted by Politico, both of which will livestream it here. The seven-candidate stage will be moderated by four journalists from the two publications: PBS NewsHour’s Judy Woodruff, Amna Nawaz, and Yamiche Alcindor, and Politico’s Tim Alberta.

It’s a debate that almost didn’t happen because of a labor dispute: Unite Here Local 11, a union representing about 150 cooks, dishwashers, and cashiers on the Loyola campus, was at an impasse in negotiations with food service company Sodexo, causing Democratic candidates to say they’d boycott the event if it required crossing a picket line. With an assist from the Democratic National Committee, however, United Here and Sodexo have since reached a tentative resolution, enabling Thursday’s event to continue as planned.

With the first primaries and caucuses rapidly approaching, this debate marks a key opportunity for candidates to reach a national audience. Polling has remained pretty consistent thus far, though a majority of Democratic voters say they haven’t yet settled on a candidate. Thursday’s debate could help frontrunners like former Vice President Joe Biden, Sen. Bernie Sanders, and Sen. Elizabeth Warren further differentiate themselves from the rest of the pack, while lower-polling candidates try to make additional gains.

Impeachment and health care are expected to remain major focuses this week, along with questions about how Democrats can make sure their leaders continue to represent the diversity of the party: The sixth debate stage will be a lot whiter than previous ones, and entrepreneur Andrew Yang will be the only person of color on stage.

The seven candidates who qualified for the debate had to hit higher thresholds for polling and fundraising compared with previous debates. In addition to securing at least 200,000 individual donors, they were required to poll at 4 percent in four DNC-approved surveys, or 6 percent in two DNC-approved surveys from the four earliest primary and caucus states.

The candidates who made the debate are :

The state of the race, explained

Polling hasn’t changed much: Polling since the November debate has remained relatively consistent. Biden is still the frontrunner with 27.9 percent support, followed by Sanders at 19.7 percent and Warren at 15 percent, according to the RealClearPolitics polling average. Buttigieg, meanwhile, has reclaimed fourth place with 8.6 percent after being briefly outshone by Sen. Kamala Harris (who has since dropped out of the race). Former New York City Mayor Michael Bloomberg, too, has seen his massive advertising investments translating to a slight boost in the polls.

… But the race is still very fluid: Although polling has been steady, a large proportion of Democratic primary voters have yet to make up their minds, Vox’s Sean Collins writes. Polls from Marist, Quinnipiac, and Suffolk all found that more than 50 percent of voters haven’t made a final decision on their top choice for the primaries. And although the field has winnowed some since the last debate, with Harris and Montana Gov. Steve Bullock among those who have dropped out, relatively new entrants like Bloomberg and former Massachusetts Gov. Deval Patrick continue to build out their campaigns.

The slate of frontrunners is very white: Although the Democratic field of primary candidates began as the most diverse in history, the four current frontrunners are all white, prompting questions about whether institutional barriers like the primary schedule — and the dominance of states like Iowa and New Hampshire — hurt candidates of color and discount voters of color. Former Housing and Urban Development Secretary Julián Castro, especially, has argued that the order of the primary states means that the initial pool of voters aren’t representative of the Democratic electorate.

The Iowa caucus is less than 50 days away

Although voters are still weighing their options, the Iowa caucus is now less than 50 days away, with the New Hampshire primary, Nevada caucus, and South Carolina primary following in rapid succession. A whopping four debates are scheduled for January and February ahead of each of those races, but December’s is the final opportunity for candidates to leave their mark ahead of the holidays.

The smaller stage could enable candidates to delve deeper into their positions on a range of issues, including health care, student debt, and reproductive rights. It’s also likely to further highlight the ideological divides between progressives Sanders and Warren and moderates Biden and Buttigieg on several of these policy areas.

The stricter debate requirements mean that many lower-polling candidates are, once again, missing out on a potential platform to reach voters who might be less familiar with them. The DNC has yet to release the requirements for the January debate, but the organization has said it intends to continue using polling and donor data as part of its criteria.

It’s hard to believe that this debate marks the halfway point in the dozen or so debates the DNC has planned for the Democratic primary. But if recent polling is any indication, many voters still aren’t sold on any one candidate just yet.

Asymptomatic coronavirus spread is real
Can you still do IVF during the coronavirus pandemic?
The controversy around the White House banning a CNN reporter, explained
How a year of publishing protests rocked the industry
How a red state might hike taxes on the rich to give teachers a raise
Andrew Yang told Asian Americans to prove their Americanness. Here’s why that’s wrong.