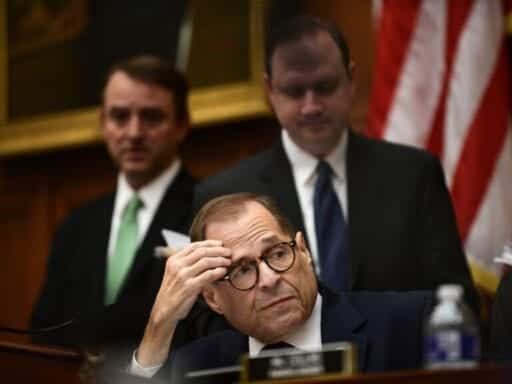 The House Judiciary Committee takes over the impeachment inquiry with a hearing on impeachable offenses.

The impeachment hearings are not over, they are simply moving to a different House committee.

Following two weeks of public hearings in the impeachment inquiry led by the House Intelligence Committee, on Wednesday the House Judiciary Committee is picking up where their fellow lawmakers left off with a hearing defining impeachable offenses.

The move from one committee to the other marks an important shift: It means lawmakers are now less concerned with gathering evidence of potential wrongdoing by President Donald Trump and more interested in deciding what that evidence means and whether it is enough to write and vote on articles of impeachment.

The formal handoff follows a Tuesday evening vote in the Intelligence Committee on a report summarizing that committee’s findings. The House Judiciary Committee has begun to review that report and will use it as a blueprint for drafting its articles of impeachment.

The first Judiciary Committee impeachment hearing is set to begin Wednesday, December 4, at 10 am ET. Vox will stream it live on both Facebook and Twitter.

Who are the impeachment hearing witnesses?

To advance the impeachment process, the House Judiciary Committee — led by Democratic Rep. Jerry Nadler — will hear on Wednesday from four witnesses, all constitutional law scholars. The goal of this first hearing is to provide a clear definition of what constitutes an impeachable offense.

Democratic members of the committee chose three of the witnesses; Republicans were allowed to select one. They are:

Most of these witnesses have made their views on impeachment clear. When asked on Amanpour & Co. whether Trump had committed an impeachable offense in October, Feldman, one of the Democrats’ choices, said, “on its face, for sure.” In his role as an opinion columnist for Bloomberg, he wrote in November of Trump’s pressure campaign in Ukraine: “That abuse of power is a high crime and misdemeanor. It merits impeachment.”

Similarly, Gerhardt — who has written two books on impeachment and served as a legal expert during the Bill Clinton impeachment hearings — has argued the articles of impeachment Richard Nixon faced could also be applied to Trump, telling Slate’s Dahlia Lithwick in late November:

First, [Trump] has obstructed justice [in] a variety of different ways. Second, he has asked the president of a foreign country — actually asked the presidents of a few different countries — to intervene in the next election on his behalf. And then third, he has refused to comply with more subpoenas than most people can count.

Turley — the Republicans’ choice, who also was a legal expert in the Clinton hearings — has made the opposite point. He argued in the Hill that Democrats are “pursuing an impeachment that seems designed to fail with an incomplete and conflicted record,” writing that more evidence is needed for impeachment, and arguing House Democrats are ignoring exculpatory evidence such as Trump claiming there was no quid pro quo with Ukraine.

Karlan — who recently presented arguments before the Supreme Court on behalf of two men who say they were fired for being gay — has been less vocal about the issue of impeachment with respect to Ukraine.

Not in attendance Wednesday: President Donald Trump or his lawyers. House Democrats invited both the president and his legal team to the proceedings, but Sunday evening, White House counsel Pat Cipollone said neither would attend, calling the upcoming hearing poorly defined and the impeachment inquiry riddled with “profound procedural deficiencies.”

Despite this, Cipollone said the White House may participate in future hearings, which will likely focus on specific articles of impeachment.

What the witnesses will likely cover on Wednesday

All four experts will likely be questioned specifically about Article Two, Section 4 of the Constitution, which states a president can be “removed from Office on Impeachment for, and Conviction of, Treason, Bribery, or other high Crimes and Misdemeanors.” Treason and bribery are well defined; high crimes and misdemeanors are less so.

Whether Trump committed treason is not at issue. In recent weeks, however, Democrats have begun to call the president’s actions bribery.

Turley told C-Span’s Washington Journal he sees this as a mistake, arguing Trump’s actions don’t meet the definition of bribery the Constitution’s authors worked from: “If they actually try to argue that the Ukraine matter is bribery, then this will come to a crashing conclusion.”

Republicans may ask him to expand on this point, while Democrats may work to have the other experts counter it. And all experts will likely be called on to expound upon what constitutes high crimes and misdemeanors and to explore whether Trump’s relationship with Ukraine could be described as such.

A prolonged discussion of one sentence in the Constitution might not seem like the makings of a blockbuster hearing, but House Democrats seem to want to generate a common understanding of what impeachable conduct is.

This will become important in the weeks to come as members of the Judiciary Committee work to draft articles of impeachment and in explaining these articles both to the American public and to their fellow lawmakers in the House, who will be called to vote on them should the committee approve them.

What to expect from Democrats and Republicans — and what comes next

The next phase in impeachment proceedings officially began Monday, when House Democrats on the Intelligence Committee — led by chairman Rep. Adam Schiff — submitted a report summing up the findings of weeks of closed-door and public witness interviews. House Democrats publicly released the report Tuesday after it had been reviewed by committee members ahead of an approval vote Tuesday evening.

It was approved — albeit on party lines — Tuesday evening and has been sent to the House Judiciary Committee, which will read it and use it to shape its hearings, both the one on Wednesday and future hearings (which have not yet been defined but to which President Trump has been invited).

The report makes the case that Trump conditioned first a coveted White House visit and later congressionally approved military aid on Ukraine opening investigations into former Vice President Joe Biden, his son, and Democrats more broadly. Drawing on the testimony of current and former officials like Ambassador to the EU Gordon Sondland and national security aide Fiona Hill, the document works to show Trump directed this pressure campaign, that top officials like Secretary of State Mike Pompeo were involved, and that Trump worked to obstruct the committee’s investigation into his conduct.

Republicans on the Intelligence Committee have written their own report that works to frame witness testimony that featured sworn statements about the president and top aides pressuring Ukraine into investigating his rivals.

This report, which is also publicly available, claims Trump did nothing more than engage in an innovative “‘outside the beltway’ approach to diplomacy” that was too much for career diplomats to handle, and that frames the impeachment inquiry as an “orchestrated campaign to upend our political system.”

Expect both Republicans and Democrats on the Judiciary Committee to use these reports as guidelines when shaping their case.

Democrats will likely use words like “extortion” and “bribery,” working to build a case that Trump abused the power of his office in a manner that put Ukrainian lives in danger and threatened the fairness of US elections. The Republican defense is likely to follow the contours of their report, arguing Trump was worried about corruption in Ukraine and hesitated sending congressionally approved military aid not because he wanted the country to investigate a rival but because he feared taxpayer money would be embezzled — all while framing impeachment as a partisan attack.

These party objectives may turn what would seem on paper to be a relatively academic discussion into a fiery hearing, particularly given the Republican Party’s representatives on the Judiciary Committee. The GOP delegation is led by Rep. Doug Collins, who began his week passionately defending the president against the impeachment inquiry on Fox News, and whose services as a vociferous ally recently led Trump to personally advocate for the governor of Georgia to appoint him to an open US Senate seat for that state.

And Collins is joined by other staunch Trump defenders who have been relentless in seizing opportunities to impugn the impeachment process while championing the president, like Rep. Matt Gaetz — who led the Republican break-in into a security House Intelligence facility to protest the inquiry — and Rep. Jim Jordan, who has worked to undermine the inquiry both in the press and during his questioning time in the Intelligence Committee’s public hearings. Jordan was reassigned to that committee ahead of those hearings in part because of his theatrical style of allyship, something he is certain to bring to the Judiciary hearings.

After Wednesday’s hearing, the Judiciary Committee is expected to have more impeachment hearings, although the timeline for these is uncertain. Democrats have signaled they would like to have a full House vote on impeachment before the end of 2019. Monday, House Majority Leader Steny Hoyer announced the lower chamber’s last vote of the year has been pushed back to December 20, which would seem to give lawmakers a bit more time for an impeachment vote before their December recess.

Should the House approve the articles of impeachment, the process would move to the Senate for a trial presided over by Supreme Court Chief Justice John Roberts. That trial’s rules would be developed by Senate Republicans, led by Sen. Mitch McConnell, who has so far given little indication of how he envisions the Senate trial playing out.

Girlfriend, you are so out: Marianne Williamson quits presidential race
The 2019 Victoria’s Secret fashion show has been canceled. It was only a matter of time.
The violent end of the Capitol Hill Organized Protest, explained
Why haven’t we found aliens yet?
Joe Biden wins some early Congressional support, but former colleagues see challenges ahead
How Trump and his son helped make a Covid-19 conspiracy theorist go viral in a matter of hours