What to expect from Marie Yovanovitch’s impeachment testimony 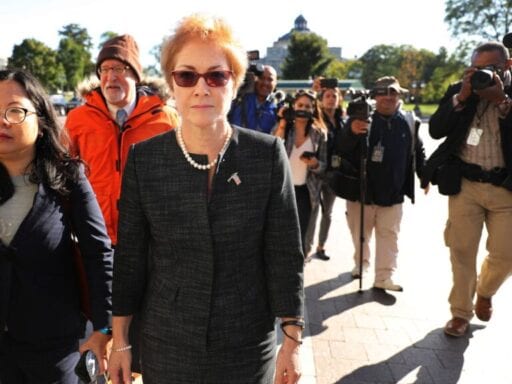 Share
Loading...
Former US Ambassador to Ukraine Marie Yovanovitch is surrounded by lawyers, aides, and journalists as she arrives at the US Capitol October 11, 2019 in Washington, DC. | Chip Somodevilla/Getty

Yovanovitch’s fate is a prologue to the main scandal.

House Democrats’ second public hearing in their impeachment inquiry kicks off at 9 am ET on Friday, featuring the testimony of former US Ambassador to Ukraine Marie Yovanovitch. You can watch the hearing on CSPAN or other major networks, and we’ll embed a livestream in this post once one is available.

After hearing from witnesses who had a front-row seat to Trump officials’ attempts to pressure Ukraine’s president Volodymyr Zelensky this summer, Friday’s hearing will take a step back chronologically, to an earlier point in this saga.

Yovanovitch, a career diplomat who was widely respected at the State Department, was ousted from her ambassador post back in April, just days after Zelensky was elected. The alleged quid pro quo efforts unfolded after she left Kyiv. But her ouster is a story in itself, one that showcases the influence Rudy Giuliani and certain Ukrainian officials gained over US policy.

It began, Yovanovitch has said, with ominous rumors that Giuliani and a top Ukrainian official were going to “do things” to her. In the months that followed, Giuliani, Fox News hosts, and even the president’s son Don Jr. would call her corrupt or publicly push for her ouster. She was eventually told to leave Kyiv and return to the US on the next plane.

Months after Yovanovitch’s exit, President Trump made a menacing-sounding remark about her to Zelensky on the phone: “She’s going to go through some things,” he said.

Yovanovitch told her side of her story, at length, to House impeachment investigators last month. “I couldn’t imagine all the things that have happened over the last six or seven months,” she said. “I just couldn’t imagine it.”

Prologue to a scandal: the campaign against Ambassador Yovanovitch

Yovanovitch was a career foreign service officer for over three decades; she was sworn in as ambassador to Ukraine in August of 2016, a post she’d hold until her abrupt removal from it in the spring of this year. (She’s still a State Department employee, but she is currently spending a stint at Georgetown University as a teaching fellow.)

According to the accounts of other witnesses who have testified in the impeachment inquiry, Yovanovitch was highly respected among her colleagues. But she ran afoul of two powerful people: Trump’s personal lawyer Rudy Giuliani and Ukraine’s prosecutor general (under the previous administration) Yuri Lutsenko.

In an apparent effort to win President Trump’s favor, Lutsenko and Giuliani began discussing the possibility that the Ukrainian prosecutor general could launch investigations into Trump’s enemies. He’d investigate Burisma (the Ukrainian natural gas company whose board included Hunter Biden) as well as purported Ukrainian interference in the 2016 US presidential election.

But Yovanovitch got in the way. When Lutsenko asked the US embassy to set up meetings with FBI or Justice Department officials, she objected, saying that’s not the typical way these things are handled. Instead, she encouraged him to meet with the FBI’s legal attaché in Kyiv. “I don’t think he really appreciated it,” she told investigators.

In response, she claimed, Lutsenko began spreading what Yovanovitch says was a completely fabricated story about her: that she gave him a list of people she didn’t want him to prosecute. (Lutsenko has since recanted that story.) Rumors also spread that Yovanovitch was a Trump critic who was bad-mouthing the president in private. The purpose of these rumors seems to have been to push her out of the ambassadorship.

The smear campaign exploded into public view in March of this year, when Lutsenko gave an interview to conservative journalist John Solomon of The Hill repeating the unsubstantiated allegation that Yovanovitch had given him a “do not prosecute” list.

Soon, top Trump allies like Giuliani and Fox News talk show host Sean Hannity were openly attacking Yovanovitch. The president’s son Don Jr. also tweeted an article about calls to remove her, writing that the US needs “less of these jokers as ambassadors.”

Then, in late April, just three days after Zelensky’s election meant a new administration would come in, Yovanovitch got a call from a State Department official who told her to leave Ukraine on the next plane. The Deputy Secretary of State later explained to her that Trump had decided she had to go — and the haste was due to fear Trump would attack her in a public tweet.

Yovanovitch was out. But when Trump spoke to Zelensky during their now-infamous phone call on July 25, her name came up. “The former ambassador from the United States, the woman, was bad news, and the people she was dealing with in the Ukraine were bad news, so I just wanted to let you know that,” Trump said, according to a quasi-transcript released by the NSC. Later, he added: “Well, she’s going to go through some things.”

For more of an idea of what Yovanovitch will say, read the transcript of her closed-door deposition at this link.

What’s next after the Yovanovitch hearing

Friday’s hearing will close out this first week of impeachment inquiry hearings, but Democrats have set up a full slate of events for next week.

Then, on Thursday, November 21, former National Security Council staffer Fiona Hill is scheduled to testify. It is unclear whether that will be the end of the public hearings or whether there will be more to come. But Democrats had hoped to complete this phase of their inquiry before Thanksgiving.

Trump’s lawyer calls Democrats’ demands for tax returns “a gross abuse of power”
Jon Batiste walks us through a day in the life of The Late Show with Stephen Colbert
Rudy Giuliani cancels paid appearance at a pro-Russia conference
Why Bernie Sanders is right and wrong about female presidential candidates
Midterms 2018: Ayanna Pressley runs unopposed for Massachusetts’s 7th District
Mask mandates are crucial for fighting Covid-19. How should they be enforced?

The convenience of American amnesia