What to expect from this week’s impeachment hearings 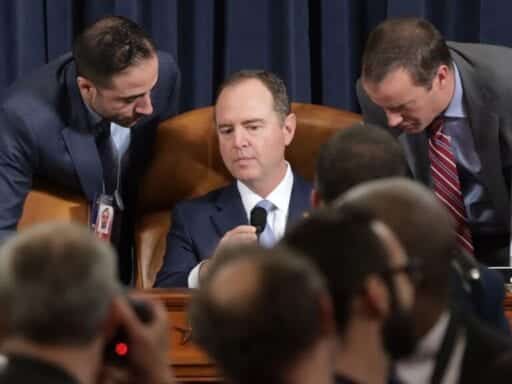 Nine witnesses will testify at five hearings between Tuesday and Thursday.

House Democrats have set up a packed schedule for their second full week of impeachment inquiry hearings, with nine witnesses set to testify between Tuesday and Thursday.

Things kick off on Tuesday morning at 9 am Eastern, with testimony from Lt. Col. Alexander Vindman (a National Security Council staffer) and Jennifer Williams (a State Department official detailed to the vice president’s office). We’ve embedded a live stream above, and you can also watch it on C-SPAN or other news networks.

Later, on Tuesday afternoon at 2:30 pm Eastern, the committee will hear testimony from Kurt Volker (the former US special representative for Ukraine) and Tim Morrison (a National Security Council staffer).

The hearing beginning Wednesday morning at 9 am Eastern will likely be especially explosive. It will be devoted entirely to Gordon Sondland, the US ambassador to the European Union. And Sondland is viewed by Democrats as the least credible witness so far — much of his testimony has conflicted with other aides’ recollections and documents, and he’s already “updated” his testimony once. So expect him to face serious pressure over whether he’s telling the full story.

That afternoon, Wednesday at 2:30 pm Eastern, two lower-profile witnesses — Laura Cooper (a Defense Department official) and David Hale (the under secretary of state for political affairs) will appear.

The week’s testimony will close out on Thursday at 9 am Eastern, with testimony from Fiona Hill (the former top NSC staffer handling Russia and Europe), as well as David Holmes (a Kyiv-based State Department official who stepped forward only recently to report new information about the scandal.)

All of these witnesses have already given closed-door depositions in the impeachment inquiry, so most of what they have to say is already known. The hearings are primarily to have them repeat their accounts of what they saw transpire in public.

And, for Ambassador Sondland in particular, they provide one more opportunity for him to try and remember some of the many things he failed to recall in his first go-round.

Where the facts stand in the Trump-Ukraine scandal

The impeachment inquiry has reached a point where relatively few of the underlying facts are disputed. Extensive witness testimony and documents have clarified the following:

We’re still lacking some facts about the military aid holdup and release (because the key officials involved, like acting White House Chief of Staff Mick Mulvaney and former National Security Adviser John Bolton have refused to testify). Still, the question of whether a quid pro quo was presented to the Ukrainians is no longer in doubt. In fact, two were — first, a White House meeting in exchange for investigations, and then, releasing military aid in exchange for investigations.

Meanwhile, Trump’s team is still trying to downplay the extent of the president’s involvement in all this — arguing that it was limited to what he said on just one phone call. But more information keeps coming out suggesting he was personally involved in what his aides and allies were doing all along.

What the witnesses will talk about this week

Nine separate witnesses are expected to testify this week. Some were more involved in the scandal than others — and some may be more eager to defend Trump politically than others.

For instance, three of the approved witnesses — Kurt Volker, Tim Morrison, and David Hale — were actually requested by Republicans on the House Intelligence Committee. (The GOP requested a longer list, but Democrats only approved those they deemed most relevant to the inquiry).

None of these witnesses will get Trump off the hook, exactly — in fact, Morrison’s testimony can be read as quite damning for Trump, and Volker turned over a plethora of text messages that have been crucial evidence for Democrats. But Republicans who heard their closed-door testimony evidently concluded they’d each by politically helpful in some way.

Another witness — Gordon Sondland — has also seemed to be trying gamely to protect Trump in his testimony so far, often in ways that strain credulity. For instance, he has argued that the quid pro quo push came relatively late and that he didn’t even realize it was about the Bidens, he has tried to put the blame for it on Giuliani, and he has repeatedly failed to “recall” any personal involvement from Trump in it.

But after Sondland went in to give his initial deposition, other witnesses told the impeachment investigators a very different story. They recalled that Sondland was heavily involved in demanding investigations from the Ukrainians, and that he repeatedly claimed to have talked with Trump about the topic and to be carrying out Trump’s wishes.

One new witness, Kyiv-based State Department official David Holmes, came forward just recently to reveal that he saw Sondland call President Trump while they were in a restaurant together. Holmes said he could hear Trump ask about “investigations,” that Sondland assured him the Ukrainians would play ball, and that Sondland said after the call that Trump only really cared about Ukraine for the purposes of investigating Biden.

Holmes was a late addition to Democrats’ hearing lineup, and will appear Thursday. The other witnesses called by Democrats include, as mentioned, Fiona Hill and Alexander Vindman (National Security Council officials who were deeply concerned by the push for investigations), Laura Cooper (a Defense Department official who struggled to learn why the White House was blocking aid to Ukraine), and Jennifer Williams (a State Department official detailed to Vice President Mike Pence’s staff).