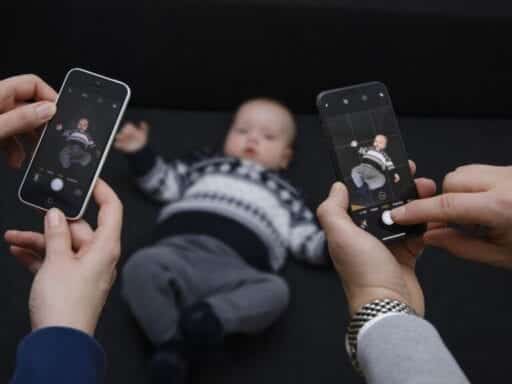 Share
Loading...
Studies suggest that kids will have well over 1,000 pictures of them on social media before they’re 5 years old. | Photo Illustration by Thomas Trutschel/Photothek via Getty Images

Explore the hidden risks of “sharenting” on this episode of the Reset podcast.

The internet isn’t always the safest place for adults, especially considering the amount of privacy we forfeit every time we share information about ourselves online. But what about kids and babies? How safe is it for them?

This episode of the Reset podcast explores what’s at risk for children when the adults in charge choose to “sharent,” or put out photos and videos about them on social media.

In the first part of the episode, guests Kara Swisher and Scott Galloway — co-hosts of the Recode podcast Pivot and parents — admit they both post photos of their children online with varying degrees of privacy. “I’m a terrible sharent. I don’t know how else to put it,” Swisher tells host Arielle Duhaime-Ross, saying she’s shared pictures of her children “for a long time.” Galloway, on the other hand, made his Instagram private because he finds it “somewhat performative when other people post pictures of their kids before the age of consent.”

Later in the episode, Leah Plunkett, author of Sharenthood: Why we should think before we talk about our kids online, explains the potential dangers that lurk with having anything about your children on the internet, whether it’s shared to a private account or not.

“We know that a number of the images that are pornographic of children are pictures of real kids that are taken offline and photoshopped or otherwise retouched. We know that children’s identities are particularly vulnerable to identity theft because most children would have no legitimate reason to have their Social Security number tied to a credit product.”

According to her, privacy is a myth when you consider that someone can always take screenshots of your private content or access it if someone who follows your locked account has their phone stolen.

“Any time a picture is shared digitally on social media, you should assume that it could get out of your control,” she warns.

She adds that “any device in your home that is taking in digital data and sharing it back to a software application” poses a potential danger. That means home cameras like Nest, home assistants like Alexa, or the Echo Dot Kids.

Listen to the entire conversation here. Below, we’ve also shared a lightly edited transcript of Plunkett’s conversation with Duhaime-Ross.

Listen and subscribe to Reset on Apple Podcasts, Stitcher, or Spotify.

I think that the desire to connect with people we know and make connections with new people by bonding over our kids is really natural and beautiful. But the technology tricks us into not realizing just how public it is.

Some studies suggest that kids will have well over 1,000 pictures of them on social media well before they’re 5 years old. And those pictures and the information that comes with them, they’re not private.

So you think you’re sharing with a closed community and you’re really not. I really do worry about thinking we’re keeping something private when actually we’re broadcasting it to thousands, if not tens of thousands, of people.

What exactly are the risks? Worst-case scenario, what are we talking about when we talk about people sharing photos of their children on Twitter, Instagram, or Facebook?

So we know that a number of the images that are pornographic of children are pictures of real kids that are taken offline and photoshopped or otherwise retouched. We know that children’s identities are particularly vulnerable to identity theft because most children would have no legitimate reason to have their Social Security number tied to a credit product.

So if you are an identity thief or somebody intent on obtaining credit in someone else’s name, you can get a Social Security number through a data breach like Anthem or some of the other big high-profile data breaches that have had Socials attached to them. And then you combine that with information about age, location, exact date of birth and other details that we parents share readily.

And the government doesn’t stop that? Nobody is going, “Hey, this kid is asking for a line of credit. That is weird. This child is 6 months old”?

The government will come after it and bring an enforcement action or a criminal prosecution once it happens.

My main reaction is, 1) people don’t like being told not to share pictures of their kids online. And 2) even if you are the kind of parent who’s going to be really, really careful, there are no systems set up for you to be absolutely certain that you are doing the best by your child.

You are right on both counts.

There is no systems set up. Even those of us who are really trying to think about privacy when it comes to social media are put in a really tough position because short of something happening to our child’s image that violates criminal law — [like when] somebody takes it off the internet and manufactures into it — there are not a lot of law enforcement or regulatory mechanisms keeping an eye on the Wild West of social media when it comes to children’s pictures and their data.

The studies show that most of us don’t read these terms of use and privacy policies. And even if we do read them, good luck understanding them. I say this as somebody who studies them: I have trouble.

What would you say to a parent who doesn’t think that a picture of their child naked in a sink or a bathtub is a problem if it’s shared on a private Instagram that has very few followers?

I would say that they’re right, that they are taking more precautions than, let’s say, posting it on Twitter and tagging it “#nakedbabyinabathtub.”

But any time a picture is shared digitally on social media, you should assume that it could get out of your control.

It could get out of your control if one of your followers loses their phone and someone else gets it, if one of your followers takes a screenshot of it and re-shares it or has their phone hacked into, and even if you feel really confident that your five Instagram followers are your best friend, your parents, and your grandma — so you trust them completely and feel like the odds of them losing their device are slim — you still can’t control or even really know what may be happening behind the tech company scenes with those images.

So I’d say to that parent that what they’re doing is lower risk than certain behaviors. But it’s not no-risk. My rule of thumb to parents is don’t post pictures in any stages of undress.

How is that any different than the risks for adults? Why focus specifically on kids?

Because parents especially (but also teachers, grandparents, and other trusted adults), we have to step in and serve as the legal decision-makers for our kids when it comes to their images and their information.

Any time that you are being asked to step into someone else’s shoes and serve as their watchdog, you have a heightened moral responsibility to make sure that you’re minimizing the risk that they could be exposed to.

I’m not sharing stuff on social media, what other data might be accessible about my kid?

If you are using any smart devices in your home or any sensor-based devices, then they are going to pick up information about your children. So a Nest cam, a smart TV, or a smart diaper (which is a real thing).

Any device in your home that is taking in digital data and sharing it back to a software application or other type of digital infrastructure is taking your kid’s private information and having it leave your home.

That’s actually kind of terrifying. What’s the solution here? Are you advocating for parents to become technophobes or luddites?

So much about having a child these days is involved in setting them up for success by making sure that they have early interactions with tech. But it sounds like you’re saying to hold off on that.

I am advocating that all of us start to just have more conversations about it and raise our own awareness. Parents should look for low-tech or no-tech ways to do particularly intimate things. So, for instance, going back to the smart diaper, if [there isn’t a medical reason for it], maybe just think about changing that diaper the old-fashioned way.

While I’m not advocating for parents to become technophobes, I am advocating for us to make values-based decisions and think when we are using a digital technology or service, whether it is social media to stay connected or an Alexa or other home assistant: Are the benefits from that outweighing the potential privacy risks and the potential downstream risks to children’s current and future opportunities?

It’s very reasonable for parents to say, “My social media settings are set to private so I feel pretty confident that the images aren’t being re-shared. I don’t really care if surveillance technology uses my kid’s pictures and it is worth it to me to stay connected to my family in Australia,” for instance.

I don’t advocate parents break their phones or go live in a hut in the woods. But I do advocate that we all raise our awareness that there are hidden costs and hidden risks to doing things digitally.

Listen to the full episode and subscribe to Reset on Apple Podcasts, Stitcher, or Spotify.

What’s up with the yield curve?
The soon-to-be longest shutdown in history, in photos
How researchers are using Reddit and Twitter data to forecast suicide rates
We’re failing in the opioid crisis. A new study shows a more serious approach would save lives.
Man charged in death of 7-year-old girl Jazmine Barnes
Ask a Book Critic: Books to kick off the new year

The new Alzheimer’s drug that could break Medicare

The best $298 I ever spent: Oysters and a cocktail the night before I gave birth