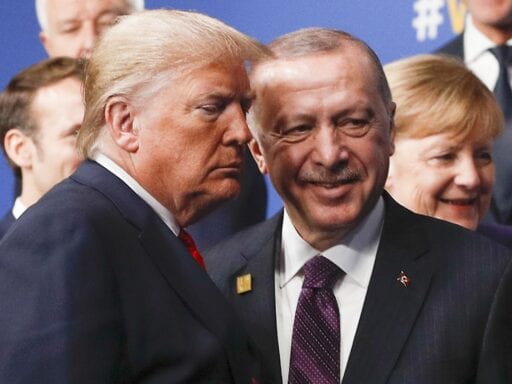 Share
Loading...
President Donald Trump and Turkey’s President Recep Tayyip Erdogan leave the stage after the family photo to head to the plenary session at the NATO summit at the Grove hotel in Watford, northeast of London, on December 4, 2019. | Peter Nicholls/AFP via Getty Images

Countries use Trump’s business to influence US foreign policy.

The entanglements between President Donald Trump’s foreign policy and his global business have long been an unnerving feature of his White House tenure, giving rise to ethics concerns — as well as fears that allies and adversaries might use those businesses to manipulate the executive branch. The New York Times’s landmark report on Trump’s taxes over the past two decades helped expose the nature of some of those ties abroad — and they’re more extensive than the president has let on.

According to the revelations, Trump — who broke with decades of precedent by refusing to publicly release his tax returns — brought in $73 million from around the world during his first two years in office. A lot of those funds came from his golf resorts in Scotland and Ireland. But he also received cash from countries crucial to the global affairs objectives of his administration, like $3 million from the Philippines, $2.3 million from India, and another $1 million from Turkey.

The returns also show that Trump’s empire garnered more revenue from abroad than previously known. Over the past two decades, for example, Trump earned at least $13 million in a licensing deal for two towers in Turkey; a similar agreement in the Philippine capital of Manila was worth $9.3 million; and he made $5 million in a botched hotel project in Azerbaijan, roughly twice what he revealed in an ethics filing.

Furthermore, Trump in 2017 paid hundreds of thousands of dollars more in taxes to foreign countries like Panama, India, and the Philippines than he did the US, where he paid the lowly sum of $750.

None of the president’s foreign earnings are terribly surprising, as Trump’s hundreds of businesses have continued with their work as usual since he became America’s president.

In 2017, the Washington Post detailed how Trump made millions licensing his name to real estate projects around the world. Congressional committees revealed foreign governments booked rooms at Trump’s hotel in Washington ahead of official meetings.

And Open Secrets, a group researching the influence of money in politics, reported in 2019 that Trump held $130 million in foreign assets by the end of his second year in office. His most recent personal financial disclosures, covering 2016 through 2019, showed revenues of up to $4.1 million came from India, up to $7 million came from Turkey, and up to $5 million came from the Philippines, per the researchers.

“Trump is continuing to profit from his foreign business interests,” Open Secrets’ Anna Massoglia told me, adding that the Times report has helped illuminate how he’s doing so, “as well as on other financial entanglements that he’s paying taxes on.”

However, Massoglia noted, “there are a lot of gaps because he hasn’t disclosed his tax returns.” Those personal tax returns would provide an even more detailed picture than the documents the Times collected.

The Times’s tax return story, though, still drives home that Trump has made — and is still making — more money from other countries than he’s admitted publicly. That’s troubling, especially since it could negatively interfere with his job as president and remit as the unquestioned authority of US foreign policy.

As Mieke Eoyang, a former staffer on the Senate Intelligence Committee and now senior vice president of the Third Way think tank in Washington, tweeted after the story broke, “Our national security officials must act in the country’s interest not that of their foreign creditors.”

Trump has back-slapped the authoritarian leaders of the three main countries cited by the Times’s report: the Philippines, India, and Turkey. It’s less clear now if the bonhomie stems from their diplomatic relationships or because they lead nations that are lucrative for the president.

Turkey is perhaps the best example of this conundrum.

Trump said last year that he was a “big fan of” President Recep Tayyip Erdoğan, but their relationship hit some snags over Ankara’s attacks on US allies in Syria and its unlawful imprisonment of an American pastor.

When US-Turkey ties were low, the Times recalled a few curiosities:

[In 2018,] a Turkish business group canceled a conference at Mr. Trump’s Washington hotel; six months later, when the two countries were on better terms, the rescheduled event was attended by Turkish government officials. Turkish Airlines also chose the Trump National Golf Club in suburban Virginia to host an event [in 2017].

In other words, countries like Turkey can potentially find ways to Trump’s heart by ensuring money goes into his family’s pocket in hopes of altering US foreign policy. The Trump Organization, then, gives nations an unprecedented extra leverage point to influence an American president.

Money flowing into Trump’s pockets perhaps answers the question Trump himself asked of journalist Bob Woodward during an interview for the book Rage. “It’s funny, the relationships I have, the tougher and meaner they are, the better I get along with them,” Trump told Woodward about his relationships with authoritarian leaders, including Erdoğan. “Explain that to me someday, okay?”

Perhaps also smoothing the way, as the New York Times notes, other nations have placed former Trump associates into positions of power. For instance, Philippine President Rodrigo Duterte made the businessman behind the Trump Tower in Manila a special trade envoy to the US, and Argentina’s government named someone instrumental in Trump’s licensing deal in Uruguay to a cabinet post.

The implication of such moves is some foreign governments altered their operations and staffing just to appeal to the president (as the saying goes: personnel is policy). And these decisions make clear Trump’s businesses aren’t just a side nuisance and ethical dilemma — they are central to how parts of the world interact with the US during this administration.

All of this is a problem. Yes, foreign governments funneling money into business linked with the president goes against federal law. But since such rule-breaking hasn’t — and likely won’t — lead to immediate action, the biggest concern is this: If the president makes decisions based on his private interests, and not the public’s, then he’s subjugating the demands of US foreign policy for the bottom line of his family’s business.

That issue becomes more acute when you factor in Trump’s $421 million in debt, much of it owed in the next four years. It’s unclear exactly who he owes that money to, but it’s not unreasonable given the scope of the Trump Organization’s foreign business to assume some of the debt is held by foreign lenders like Deutsche Bank, which has loaned Trump’s businesses several hundred million dollars in recent years. These debts could mean Trump has financial concerns on his mind during officials chats with his counterparts.

“We don’t know where Donald Trump has borrowed that money from,” says Andrew McCabe. “If that money is from foreign sources then it really opens a Pandora’s box about foreign influence issues with the President of the US. It does not get any more serious than that.”

Ensuring foreign powers don’t have financial leverage over government officials is why, as Eoyang pointed out on Twitter, “Debt is one of the factors that goes into the denial of a security clearance. Foreign Indebtedness is a red flag.”

Due to the New York Times, that red flag — among others — is waving wildly.

Donald Trump attacks restaurant that kicked out Sarah Sanders
Armenia and Azerbaijan’s war is entering a “more dangerous and potentially tragic” stage
The coronavirus has given Trump something he’s always wanted: A chance to totally take over TV
Amazon is banning the sale of N95 and surgical masks to the general public
A modest proposal to save American democracy
The longest lunar eclipse of the century will be on July 27