What we know about a shooting, stabbing, and fire in Honolulu, Hawaii 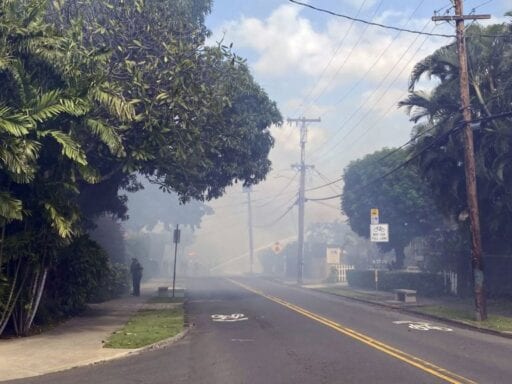 Share
Loading...
First responders secure the area as smoke billows down the street following a shooting in Honolulu, Hawaii on January 19, 2020. | Marco Garcia/AP

Two officers were killed, and two people were wounded in a Honolulu incident involving a shooting, a stabbing, and a devastating fire.

Two police officers were killed in a shooting in Honolulu, Hawaii Sunday morning — a third officer was reportedly wounded, and fourth person was stabbed.

According to Hawaii News Now, the suspected gunman — who is believed to have died as well — opened fire on police officers responding to a stabbing. That suspected gunman reportedly stabbed his landlord as she tried to evict him.

After the officers arrived, the gunman is believed to have set fire to his building, and those flames destroyed at least three other homes.

“A little bit before 10, we started smelling some smoke,” Robert Brassfield, who lives in the neighborhood in which the shooting took place, told the Associated Press. “And then we started hearing sporadic gunshots. … That went on for several minutes.”

On Twitter, Honolulu Mayor Kirk Caldwell called the incident “an unprecedented tragedy for not only the City and County of Honolulu but the entire state of Hawai’i,” and said, “I would like to express my deepest condolences to the family and friends of the two officers as well as the entire Honolulu Police Department.”

This story is still developing. Here’s what we know, and what we don’t.

This year’s Best Documentary Feature Oscar nominees focus on a changing world
The Delta Aquariids meteor shower peaks this weekend. Here’s how to watch.
Amazon threatened to fire employees who spoke out against its environmental policies
The one where the Friends logo won’t go away
Welcome to the Museums Issue of The Highlight
Trump commits to helping blue states fight the coronavirus — if their governors are nice to him