What we know about House Democrats’ formal impeachment inquiry 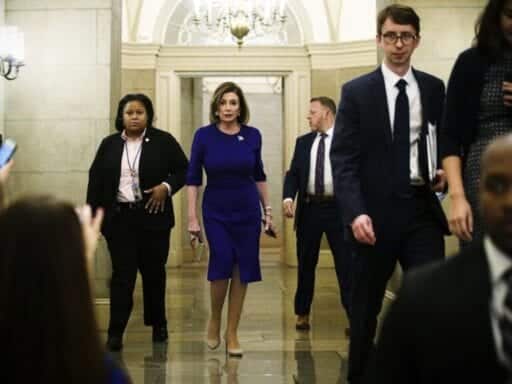 Share
Loading...
Speaker of the House Nancy Pelosi leaves her office at the Capitol on September 24, 2019. | Alex Wong/Getty Images

House Democrats — including Speaker Nancy Pelosi — seem to be headed toward an impeachment inquiry.

House leaders announced they are preparing a resolution for a vote Wednesday, formally disapproving of the Trump administration’s effort to block the release of a whistleblower’s complaint into Trump’s conversations with the president of Ukraine, information the administration and Trump’s acting director of national intelligence have so far kept from Congress.

Pelosi is also considering setting up up a special committee to formally begin an impeachment inquiry — a move that could spark controversy within the Democratic caucus as the House Judiciary Committee is already pursuing an impeachment inquiry of its own. Pelosi is expected to formally make an announcement at the end of the day on Tuesday, after meeting with the full caucus.

At least one member of the House Judiciary Committee, Rep. Pramila Jayapal (D-WA), pushed back on the idea of the creation of a select committee on impeachment. Jayapal told Vox it would take too much time, which could be better spent continuing the Judiciary Committee’s work.

“A select committee will not have any more powers, to me it doesn’t make sense to establish a select committee,” Jayapal said. “What we need is speed, efficiency, and we’ve got to move this thing quickly.”

Ahead of the 4 pm House Democratic Caucus meeting, Jayapal said she wants the House to move full steam ahead toward articles of impeachment.

“I believe that the time is now for us to move forward with some carefully crafted articles of impeachment that focus on his obstruction of Congress, his obstruction of justice, and his betrayal of the American people,” she told Vox.

The dizzying evolution on impeachment Tuesday began with news of a whistleblower complaint and a bombshell report from the Wall Street Journal this weekend. According to the WSJ report, Trump allegedly pressured Ukrainian President Volodymyr Zelensky to investigate the business ties of Hunter Biden, the son of former vice president and current 2020 candidate Joe Biden, on eight occasions. Subsequent reporting from the Washington Post also found that the Trump administration restricted military aid from Ukraine before his call with Zelensky this summer, spurring Democrats to question Trump’s use of federal money as potential leverage for his own personal gain.

Trump has confirmed pieces of the story himself. He admitted to discussing Biden in a call with Zelensky, but claims that the call was aboveboard. He tweeted on Tuesday that he has “authorized” the release of a transcript of the call. On the revelation of withholding aid, Trump said he did this only because he thinks other countries should also help cover it. The administration, however, has blocked the release of the whistleblower complaint thus far, further enraging Democrats.

Pelosi herself has said the Ukraine-Trump episode demonstrates the president’s corruption more clearly than other things he’s done.

“We have many other, shall we say, candidates for impeachable offense in terms of the constitution, but this one is the most understandable by the public,” Pelosi said at the Atlantic Festival on Tuesday.

The push from leadership came after a wave of House Democrats in swing districts who had previously been opposed to impeachment came out in favor of an inquiry (25 and counting, as of Tuesday afternoon). Roughly two-thirds of the 235-person Democratic caucus, totaling more than 160 members, now support taking steps toward impeachment.

While Pelosi was previously concerned that taking up impeachment could hurt moderate members in Trump-held districts, more and more Democrats seem to feel the implications of Trump’s conduct with Ukraine are ultimately striking enough to outweigh these reservations.

For many House Democrats, the news about Ukraine drove home a painfully clear reality: an emboldened President Trump appeared to be meddling in an upcoming US election again, right before their eyes.

The news about Trump and Ukraine came after months of the Trump administration dodging lawmakers’ subpoenas, refusing document requests, and broadly acting like it is above Congress’s constitutionally assigned oversight.

In the wake of the Mueller investigation, Ukraine gave Democrats a far more concrete example of Trump’s corruption in real time. Though Trump himself has insisted he has done nothing wrong, as he confirmed details of the reports about his call with Zelensky, his explanations for withholding the aid have shifted rapidly.

The Ukraine allegation has spurred a number of Democrats, who’d previously opposed an inquiry, to speak out. On Monday, a wave of moderate first-term Democrats from Trump-friendly districts, who up to this point have resisted liberal members’ calls for impeachment, got on board with an inquiry, penned a searing op-ed in the Washington Post. On Tuesday, additional members, including civil rights icon John Lewis, Antonio Delgado, and Lizzie Fletcher, made new calls for impeachment.

“I have been patient while we tried every other path, and used every other tool,” Lewis said in a statement on the House floor. “We will never find the truth unless we use the power given to the House of Representatives, and the House alone, to begin an official investigation as dictated by the Constitution.”

The momentum from inside the caucus, in turn, put pressure on Pelosi, who has long pushed back against impeachment calls and argued that it’s politically dangerous for Democrats to go down this road. Her concern, given impeachment’s poor polling numbers, is that such action would fire up the Republican base and endanger Democrats’ House majority in 2020.

Pelosi had called for an afternoon meeting with the caucus on Tuesday, which was intended to gauge where members stood on the subject in light of recent events. It’s clear their feedback have forced her to change her calculus.

Technically, the House Judiciary Committee has already started their impeachment investigation, but Pelosi may ask for the creation of a House select committee instead.

An impeachment inquiry is essentially the investigation that precedes any vote in committee or on the floor of the House. In the cases of Presidents Richard Nixon and Bill Clinton, the House conducted an impeachment inquiry before moving to pass articles of impeachment (Nixon ultimately resigned before the House voted on impeachment). An inquiry is important because it gives Democrats more tools to try to extract information from an unwilling Trump administration.

Senate Republicans are likely to resist anything that damages Trump

As Pelosi has highlighted in the past, the largest obstacle to advancing impeachment proceedings is likely Senate Republicans, who are widely expected to acquit Trump of any charges if the process gets that far.

In the case that the House ultimately votes in favor of articles of impeachment, the Senate’s role will be to review the charges and decide whether or not to convict the president. It’ll take two-thirds of the Senate to vote in favor of conviction in order for that to happen, a threshold Democrats are currently unlikely to meet with their 49-member conference in the upper chamber.

Recall that in the case of former President Bill Clinton’s impeachment proceedings, the House voted to approve two articles of impeachment while the Senate, on both counts, ultimately voted to acquit him.

To hit a 67-member supermajority this time around, Democrats would need 18 Republicans to join forces with them. Senate Republicans, for now, are suggesting other means for following up on the Ukraine allegation.

“The way to handle it in the Senate at this particular point is the acting head of DNI is coming to the Intelligence Committee on Thursday…that’s where it all starts in the Senate,” Senate Majority Leader Mitch McConnell said on Tuesday, adding that he wouldn’t discuss taking up “hypothetical” articles of impeachment.

House Democrats, however, are undeterred by the Republican response. As Pelosi’s announcement signaled on Tuesday, they’re ready to move ahead with this investigation even if it ultimately gets blocked in the Senate.

John Kerry and the climate kids: a tale of 2 new strategies to fight climate change
Joe Biden and Kamala Harris’s proposals could cut poverty in half
Donald Trump has joined the campaign to free A$AP Rocky from a Swedish jail
Ivanka Trump speaks out on family separation — after her father said he’d stop it
The Mystifying World of TikTok Home Tours
Democrats push for $25 billion for the Postal Service. The White House says it will reject it.