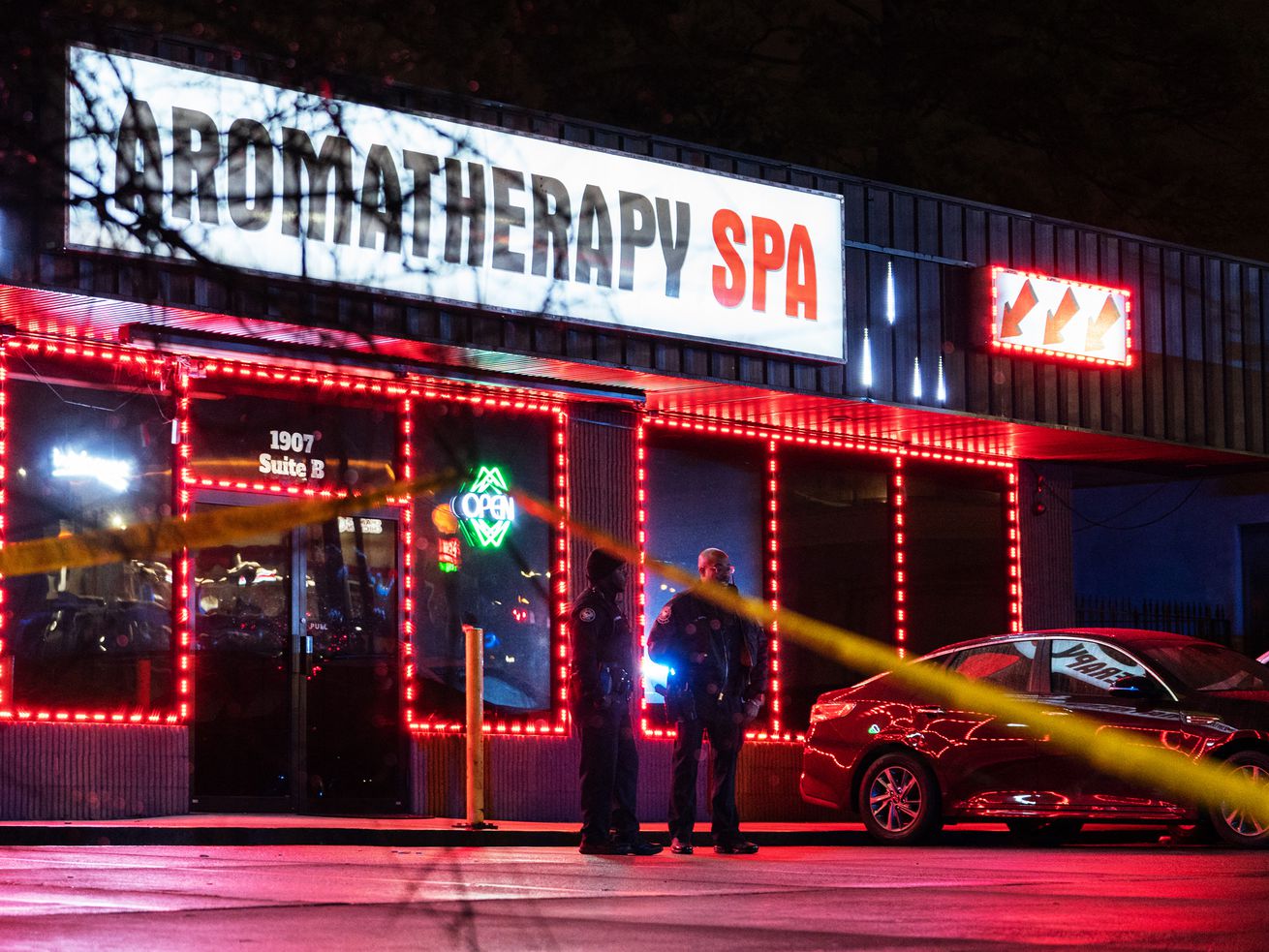 Six of the victims at the three businesses were Asian women.

Eight people were killed in shootings at three businesses in the Atlanta area on Tuesday. Six of the eight victims were Asian women, authorities say.

The attacks began at around 5 pm Tuesday afternoon. Atlanta police officers first responded to a crime scene at Young’s Asian Massage, where four people were killed, in Cherokee County, just north of Atlanta. Authorities say the victims, including one injured and taken to the hospital, were shot inside the business. About 45 minutes later, four more people were killed at two other businesses — Aromatherapy Spa and Gold Spa — just across the street from each other. The names of the victims have not yet been disclosed.

Authorities arrested the suspect, 21-year-old Robert Aaron Long, on the side of Interstate 75, roughly 150 miles south of Georgia Tuesday night after a police chase. Long, who officers believe was heading to Florida to commit similar crimes prior the arrest, is currently in custody and charged with murder. Officials are still investigating possible motives for the shootings.

Federal agents are joining local authorities to investigate the shootings. “A motive is still not clear, but a crime against any community is a crime against us all,” Atlanta Mayor Keisha Lance Bottoms said in a statement Wednesday. “I have remained in close contact with the White House and APD as they work with federal, state and local partners to investigate the suspect who is responsible for this senseless violence in our city.”

Motives remain unclear, but advocacy groups point to a rise in anti-Asian hate

While Atlanta officials say it is still early to know what motivated the shootings, Tuesday’s attacks sparked outrage and sorrow among advocacy groups across the country, particularly Asians, as they continue to face a growing number of pandemic-related anti-Asian hate incidents.

The Atlanta police chief said it was too “early in this investigation to determine [the shooting] a hate crime, even though we made an arrest.”

But many advocates say that it is impossible to divorce race from misogynist crimes that disproportionately impacted Asians. “Many of the victims are Asian. These murders occurred at a time when anti-Asian violence has been spiking,” Rep. Ted Lieu (D-CA) tweeted in response to the attacks. “All officials should do their part to condemn violence and not inflame further discrimination.”

On Tuesday, Stop AAPI Hate — an organization that has been tracking anti-Asian violence reports — also released its latest report that nearly 3,800 incidents had been reported since March 2020. The report also shows that a disproportionate number of anti-Asian attacks were directed at women — reporting hate incidents two times more than men.

The reported shootings of Asian American women on Tuesday in Atlanta is an unspeakable tragedy – for the families of the victims first and foremost, but also for the AAPI community — which has been reeling from high levels of racial discrimination. https://t.co/rBVPnrEBps

South Korea’s Foreign Ministry officials said in a statement that its Atlanta diplomats have confirmed with police that four of the women who died were of Korean descent, but their nationalities have yet to be verified.

Since the shootings took place at massage parlors and spas, Atlanta police said it has dispatched officers to similar businesses. Baker said homicides are rare for the area. The incidents also stoked responses from places like New York City, which deployed counterterrorism officers to Asian communities for caution.

Alex Trebek is prepared to say goodbye to Jeopardy. But hopefully not for a while.
How to help a friend through a tough time, according to a clinical psychologist
Missouri voters just blocked the right-to-work law Republicans passed to weaken labor unions
Sen. Mike Lee’s tweets against “democracy,” explained
The faulty technology behind ankle monitors
Many world leaders have seen double-digit polling surges amid coronavirus. Trump isn’t one of them.