What we know about the death toll in Puerto Rico 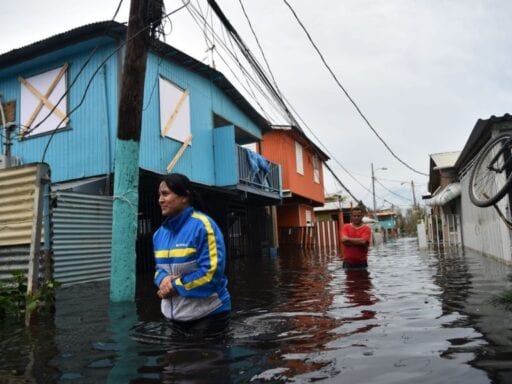 3000 people did not die in the two hurricanes that hit Puerto Rico. When I left the Island, AFTER the storm had hit, they had anywhere from 6 to 18 deaths. As time went by it did not go up by much. Then, a long time later, they started to report really large numbers, like 3000…

…..This was done by the Democrats in order to make me look as bad as possible when I was successfully raising Billions of Dollars to help rebuild Puerto Rico. If a person died for any reason, like old age, just add them onto the list. Bad politics. I love Puerto Rico!

The president provided no evidence to contradict the now widely accepted death toll, which was calculated after months of painstaking analysis of death records and expected mortality rates by researchers at George Washington University at the behest of the governor of Puerto Rico, Ricardo Rosselló.

Trump merely asks us to take him at his word that there were between six and 18 deaths after the storm hit on September 20, and that the number didn’t go up by much after that.

Make no mistake: Thousands died in the storm and the resulting humanitarian crisis. But given that the Hurricane Maria death toll has been so politicized, it’s worth walking through the research that gave us the figure of 3,000, a figure we can be pretty confident in, even though we don’t have all the names or know exactly how they died.

A brief history of the Hurricane Maria death toll

When the storm made a direct hit on the island on September 20 and knocked out 80 percent of the island’s power transmission lines, it was clear that many lives would be at stake. Thousands of sick, elderly, and small children were left without electricity, water, and medical care. And as the response progressed painfully slowly (in part because FEMA was stretched responding to two other hurricane disasters and wildfires in California), we saw that thousands continued to be with power, water, or medical care for months.

In the first week after the storm, the government announced an official death toll of 16. Immediately, to observers on the ground, this number seemed much too low. The first person to recognize it was Omaya Sosa Pascual, a reporter from the Centro de Periodismo Investigativo, a local investigative journalism group. Sosa Pascual called the 69 hospitals around the island and learned that there were an estimated 60 confirmed deaths linked to the hurricane and possibly hundreds more.

Several other media outlets, including Vox, and independent researchers then began analyzing government data and reports from the ground. We all found additional evidence that even in the first month after the storm the death toll was much higher than the official count — likely to be more than 1,000. For instance, Vox reported in October 2017 that the death toll was likely more than 450.

The official death toll, however, was eventually updated to 64 and remained there until August, even after several groups of researchers published their higher estimates in peer-reviewed journals. It took the release of the GWU report, which Gov. Rosselló commissioned himself and was the most comprehensive assessment to date, to give the government the confidence to put out a new official toll.

But still, even the 2,975 figure is not a list of names but rather a best estimate, according to Rosselló. “This number can change,” Rosselló said in August. “It could be less, it could be more, as time passes.”

Why we should trust the GWU estimate

If it feels like there have been a lot of different death tolls mentioned over the last six months or so, there have been. In the absence of a reliable figure from the government, three different groups of public health and social science researchers, along with several teams of journalists, attempted in the months since the storm to calculate the “excess mortality.”

Researchers were interested in calculating not only the people who died during the peak of the storm, but also from the resulting loss of power, water, medical, and emergency services.

Several in the first wave of estimates beginning in December put the toll at about 1,000 deaths, about 15 times higher than the official count. The government also acknowledged in a report to Congress this summer (before it released the new official toll) that the storm caused 1,427 more deaths than “normal.”

What was different about the GWU study was that it looked at death certificates and other mortality data from September 2017 through the end of February 2018. It fed that data into a mathematical model that also adjusted for age, sex, and migration from the island, and ultimately found that there were an estimated 2,975 excess deaths related to Hurricane Maria, or 22 percent more deaths than would have been expected during that period in a year without the storm.

And it also provided a clearer picture of who died. The risk of death, they wrote, was 45 percent higher for people living in poorer areas. It was also higher for the elderly.

Researchers at GWU issued a statement Thursday after the Trump tweets standing by their study, calling it “the most accurate and unbiased estimate of excess mortality to date.” Indeed, though it doesn’t give us the names of the dead or how they died, the study does appear to be the most comprehensive statistical attempt to measure the deaths from the storm in part because it was able to include the deaths from January and February.

But it’s possible that the death toll is even higher. You might have also heard about the study by researchers at Harvard, published in May in the New England Journal of Medicine, that estimated a range of 793 to 8,498 deaths, with a midpoint of 4,645 deaths.

In January and February, those researchers surveyed about 3,300 randomly selected households across Puerto Rico and asked residents how many people from those households had died in the months after the storm made landfall. They found 38 deaths in the households, and they used that figure to calculate a mortality rate and then compared it to the mortality rate from the same time the previous year.

The difference was then used to come up with a very broad estimate for the number of people who died above what you’d expect to see in a normal year: the range of 793 to 8,498 deaths.

Alexis Santos, a Puerto Rican demographer at Penn State who conducted his own analysis of mortality following the hurricane, also published a paper in the journal JAMA on August 2, with Jeffrey Howard of the University of Texas San Antonio, estimating the death toll at 1,139.

Again: All of the death toll estimates, from reputable, epidemiological statistical analyses, number in the hundreds and thousands. No matter how you count it, what happened after Maria was a huge tragedy, arguably worse than Katrina.

The estimates all show that the government initially underestimated the toll of the storm. And they show there’s no way, as Trump claimed today, there were not much more than 18 deaths.

Regardless of what the exact figure is, it’s clear that the Trump administration failed to respond to the crisis on the island with sufficient support. Many of the deaths that ensued likely could have been prevented if more attention and resources had been offered early on. He failed to lead the response and is unwilling to accept the criticism.

As my colleague Zack Beauchamp argued, the tweets are exactly what we should expect from Trump. It’s consistent with his tendency to be vengeful even on the most sensitive issues: Puerto Ricans watching their family members and neighbors die waiting for help from the federal government.

As Vox’s Matt Yglesias wrote: “The carnage in Puerto Rico is the most severe manifestation of Trump’s basic unfitness for the job he currently occupies. … If you put a telegenic demagogue in office, you will get some choice moments of televised demagoguery. You won’t get an adequate response to a hurricane, and that means you will get a sky-high death toll.”