What we know about the next coronavirus funding package 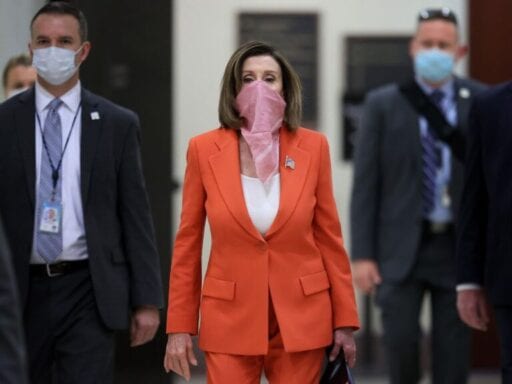 Share
Loading...
Speaker of the House Nancy Pelosi (D-CA) arrives for her weekly news conference at the Capitol on April 24. | Chip Somodevilla/Getty Images

Congress’s next bill will center on funding for desperate state governments.

Getting money to desperate state and local governments is at the top of Democrats’ priorities in the next round of coronavirus aid — though a bill could be weeks away.

House Democrats are preparing legislation for when they return to Capitol Hill, but pushed back their original May 4 return because they aren’t anywhere close to agreeing on a final bill with Republicans and the Trump administration. With nothing to vote on, House leadership concluded there was no point bringing lawmakers back to a region where coronavirus cases are rising.

Democrats are emphasizing aid to struggling state governments, so that states (many of which must balance their budgets, by law) don’t have to slash funds for public services, like police, emergency departments, public school teachers, and other public workers.

“There will not be a bill without state and local,” House Speaker Nancy Pelosi said Friday of a fourth package, which she estimated will cost billions, “probably a number equivalent to what we have done for small businesses.”

Pelosi may hit a speed bump with Senate Majority Leader Mitch McConnell (R-KY). McConnell said last week he wants to hit pause on more federal spending, with close to $3 trillion already out the door: “There’s not going to be any desire on the Republican side to bail out state pensions by borrowing money from future generations.”

Although the Senate leader conceded Monday there will “probably” be a bill for states and localities, he has signaled he wants restrictions on some of the money. McConnell also is prioritizing liability protections for businesses and employees in the next package, which Democrats vehemently oppose.

Democrats will also likely push priorities including funding for states to implement voting by mail, increased food assistance, and stronger protections for doctors, nurses, and other essential workers.

One big leverage point Democrats have on their side is that Democratic and Republican governors and mayors alike agree with them. Some Republican senators are also openly urging funding for cities and states; Sen. Bill Cassidy (R-LA) has co-authored a bipartisan bill that would create a $500 billion stabilization fund for states, counties, cities, and large towns. McConnell’s recent comments that he would be in favor of “allowing states to use the bankruptcy route” drew backlash from some Republican governors.

“Mitch McConnell probably regrets saying that,” Hogan said in a recent interview with Politico. “If he doesn’t regret it yet, I think he will regret it. . . . The last thing we need in the middle of an economic crisis is to have states all filing bankruptcy all across America and not able to provide services to people who desperately need them.”

Why states are losing money during the coronavirus crisis

The $2 trillion CARES Act was a historic emergency relief package — containing, among other things, $150 billion for cities and states. And it wasn’t enough.

The specific problem states are facing is a decline in revenue from taxation, as Vox’s Emily Stewart and Dylan Matthews explained. Many states depend on sales tax and income tax for their revenue; with small businesses closing and tens of millions of people getting laid off, those income streams for states will take a hit. So will capital gains taxes, gas taxes, and other taxes in specific states.

Unlike the federal government, states don’t have the ability to borrow unlimited amounts of money or spend billions they don’t have every year. The vast majority of states have constitutional amendments requiring a balanced budget. And if tax revenue is majorly down, one of the few options states have is to start cutting their spending.

During the Great Recession of 2008, states slashed their budgets to grapple with the lack of revenue coming in. This had lasting impacts well beyond the recession itself: states cutting money to public universities exacerbated student debt; cuts to K-12 public schools later impacted test scores and college enrollment rates.

Despite federal stimulus measures, the austerity practices at the state level worsened the Great Recession and likely lengthened it as well. This is true partly as a matter of arithmetic: State spending is a component of gross domestic product (GDP), and as such, lower spending at the state and local levels reduces GDP.

Experts fear we could be facing something even worse this time around. States could be facing budget shortfalls around $360 billion due to the coronavirus, according to analysis from the Center on Budget and Policy Priorities. The economic toll of the coronavirus has already been great, and although some states are starting to reopen cautiously, there’s no telling if that could set off another wave of infections and cases that forces states and businesses to shut down again.

With no set timeline on any of this, governors are pleading with the federal government to help them mitigate some of the damage in the meantime.

What Democrats plan to prioritize in a fourth package

While money for states and municipalities is at the top of Democrats’ list, it’s certainly not the only thing on there. Here are some other things Pelosi and other Democrats have mentioned.

Trump addresses rumors on whether First Lady's surgery was a facelift
What we know about the nationwide protests
Ben & Jerry’s is donating a total of $100,000 to 4 progressive causes
Lizzo, Billie Eilish, and Lil Nas X lead the 2020 Grammy nominees
It is absolutely fine to rip your books in half
5 winners and 2 losers from the RNC’s first night