What we know about the whistleblower complaint about President Trump 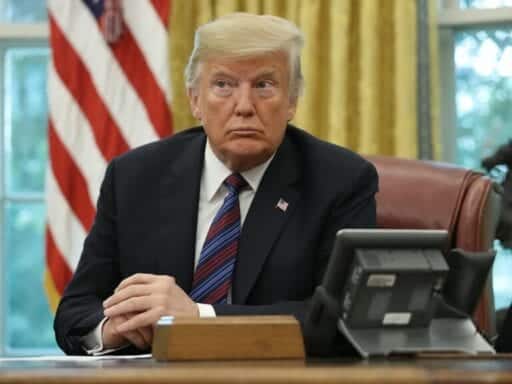 An internal Trump administration whistleblower has filed a complaint about “multiple acts” by President Trump, according to the New York Times’ Nicholas Fandos, Eileen Sullivan, Julian Barnes and Matthew Rosenberg.

In part, the complaint is about a troubling “promise” made during a conversation between President Trump and a foreign leader, per the Washington Post’s Greg Miller, Ellen Nakashima, and Shane Harris. But the Times reported Thursday that the complaint is broader than any one call or promise.

The complaint was passed on to the inspector general for the intelligence community, who determined it was credible and a matter of “urgent concern” — a legal standard that normally requires congressional oversight committees be notified. And, per a letter from the inspector general, he concluded the complaint “relates to one of the most significant and important of the DNI’s responsibilities to the American people.”

But Trump’s acting director of national intelligence has stepped in to block key congressional committee chairs from receiving the details of the whistleblower complaint — which some legal analysts say could be a violation of the law requiring they be informed.

So over the past week, Intelligence Committee chair Adam Schiff (D-CA) has been demanding answers. The inspector general briefed the committee Thursday morning, but still withheld details about the complaint’s subject matter.

The big picture is that this could be a major new scandal in the making. And the two huge questions are: which foreign leader? And what was the promise?

On Thursday morning, Trump responded on Twitter, calling the story “Fake News” and saying he wouldn’t have said “something inappropriate” on such a call.

….Knowing all of this, is anybody dumb enough to believe that I would say something inappropriate with a foreign leader while on such a potentially “heavily populated” call. I would only do what is right anyway, and only do good for the USA!

What we know so far about the whistleblower complaint about Trump

The saga began on August 12, when a whistleblower inside the government filed a complaint about Trump.

The complaint itself was filed with the Intelligence Community Inspector General (ICIG), a role currently filled by Michael Atkinson, a former Justice Department official who was nominated by Trump to this post and confirmed in 2018. An inspector general is a sort of “watchdog” who is tasked with investigating allegations of misconduct made within their own particular agency or agencies.

This complaint was filed in accordance with a law called the Intelligence Community Whistleblowers’ Protection Act (ICWPA) — which basically establishes the “proper” way for people who work in the intelligence world to file a complaint though official channels (instead of just, say, leaking the complaint, which could involve classified information, to the media). Under that law, Atkinson had 14 days to determine two things: whether the complaint was an “urgent concern” and whether it was credible. Atkinson decided that it was, on both fronts.

The next step, per the ICWPA, is that Atkinson had to send the complaint along to the Office of the Director of National Intelligence (ODNI) — currently headed by Joseph Maguire, who has filled the post of director of national intelligence (DNI) on an acting basis since Dan Coats resigned in August. Atkinson did so. After that, Maguire was supposed to send along the full complaint to the congressional intelligence committees within 7 days — by September 2, in this case.

Maguire, however, refused to do this — an action University of Texas Law professor Steve Vladeck says is “probably breaking the law.”

Yet a week later, inspector general Atkinson decided to tell the congressional committees about it himself: he wrote a letter to the House Intelligence committee telling it about the whistleblower complaint’s existence.

House Intelligence Committee chair Adam Schiff, then, sent a letter to acting DNI Maguire on September 10, demanding more information and accusing him of violating the law by not sending Congress the complaint.

ODNI general counsel Jason Klitenic — who is responsible for overseeing all legal matters within the ODNI — responded on September 13 in a letter to Schiff and the Senate Intelligence Committee. In that letter, Klitenic said that his office had consulted with the Justice Department about what to do, and that they determined the complaint wasn’t an “urgent concern” after all. He further said that the complaint “does not allege misconduct within the Intelligence Community.” (We now know this is because it alleged misconduct by President Trump himself.)

As such, Klitenic argued, the ODNI was not required to turn the information about the complaint over to Congress.

To Schiff (and many others) this looked a whole lot like a White House cover-up, in violation of the whistleblower law’s requirement that his committee be informed. “You have neither the legal authority nor the discretion to overrule a determination by the IC IG,” he wrote to Maguire, the DNI. “Your office has attempted to justify doing so based on a radical distortion of the statute that completely subverts the letter and spirit of the law.” So he subpoenaed Maguire for testimony.

Since then, on Wednesday night, the Washington Post reported the bombshell information that part of the complaint involved conduct by President Trump himself. And, with the scandal getting more and more media attention, Schiff’s struggle to get more details continues.

Inspector general Atkinson briefed the committee in classified session Thursday morning, but he would not give any further information on the complaint’s specifics — though he did make clear it involved multiple acts by Trump and not just one phone call or “promise,” per the New York Times.

Next, acting DNI Maguire is scheduled to testify before on September 26. Buckle up.

The conflict between Armenia and Azerbaijan, explained
Bobby Brown denies ever having hit Whitney Houston: “The public record is wrong”
Kamala Harris: “I may be the first woman to hold this office. But I won’t be the last.”
How behavioral economics explains who usually wins World Cup shootouts
States vs. Trump on economic reopening, France extends lockdown: Tuesday’s coronavirus news
What “defund the police” really means