What we know about turnout for the 2020 Iowa caucuses 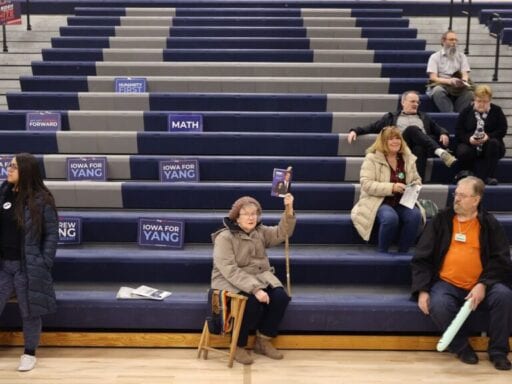 We don’t know much about the official Iowa caucus results just yet. But one thing we do know is that, based on early results, turnout this year is reportedly on pace to match 2016 Democratic turnout.

If true, that might be a bad sign for Democrats. In 2016, there was less enthusiasm around the Democratic race — in large part because Hillary Clinton was widely seen as the likely nominee — and about 170,000 people turned out in the Iowa caucuses. That was down from 2008, when excitement around figures like Barack Obama and Clinton led to a record attendance of 240,000.

As Sean Collins reported for Vox, turnout was expected to reach similar numbers as 2008 this year, given the excitement Democratic voters have expressed about the 2020 contest:

State and national polls of Democrats, likely voters, and likely caucus-goers have shown an incredible degree of excitement around the 2020 primary for months — a January Quinnipiac University national poll, for instance, found 85 percent of Democratic and Democratic-leaning independent voters saying they are either “extremely” or “very” motivated to vote in the primary’s contests.

But if turnout is down, that could be a bad sign for Democrats’ prospects in November: To beat President Donald Trump, they need Democrats to show up to the polls.

It also may be a worrying sign for certain campaigns. Pollsters and experts noted that Sen. Bernie Sanders in particular would benefit from high turnout, something the lawmaker acknowledged ahead of the caucuses. “We will know early on in the night if we are going to win,” Sanders said. “If voter turnout is high, we are going to win. … If it is low, quite frankly, we will not.”

And Monmouth University pollster Patrick Murray noted that slight differences in the size of the caucuses compared to previous years — as well as the relative sizes of various demographic groups — could have an outsize impact on the results.

“A turnout swing of as few of 10,000 voters could determine who ‘wins’ the caucus if it is driven by a specific demographic group,” Murray said.

We of course don’t know much yet about the demographic makeup of the caucuses. Although some entrance polls have been released, it’s far too early, without full results, to speculate about what they might tell us.

There are a lot of caveats with the early turnout numbers. For one, current estimates are based on just 25 percent of precincts. That 25 percent may not be representative of Iowa’s caucuses as a whole, and the final turnout numbers for the whole state could be higher.

Even if turnout is lower in Iowa this year than it was in 2008, though, it’s possible that the result isn’t representative of the nation in general.

The Iowa caucuses, after all, are a bizarre system that requires people to show up at precinct sites, stay there for hours and hours, publicly argue and campaign for candidates, and eventually group up to select a nominee.

It’s a demanding system — one that’s particularly hard on people with disabilities, people who work night shifts, people who don’t have consistent transportation, and just about anyone else who can’t caucus for hours on a Monday night — and turnout has always been low overall. So while turnout numbers can be instructive, it’s important to remember they may not be a good gauge of Democratic enthusiasm across the country.

At the same time, Iowa’s results allow candidates to build narratives around their campaigns. Winning isn’t about the delegates as much as it is about proving one’s electability — and showing the party just how much your campaign can excite the Democratic base.

With that in mind, Silver added, “In terms of the primary itself, though, it’s not great for anyone’s electability case. No one seems likely to have gotten more than ~25% of ~170,000 people.” That could be a bad sign for Democratic Party unity and enthusiasm at the end of the primary process.

Still, it’s just too early to draw any hard conclusions from the turnout data. The data might not be representative of Iowa or the country. It might not reflect on the general election or Democrats’ chances against Trump. And we don’t even have a complete data set just yet. All we know right now is that the early figures suggest turnout is down in the Iowa caucuses compared to 2008.