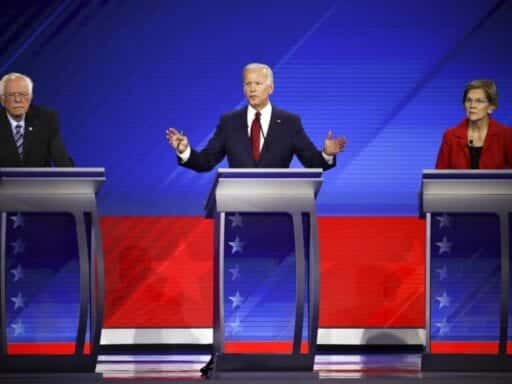 The three Democratic frontrunners finally got the chance to throw down on health care.

Former Vice President Joe Biden, Sen. Bernie Sanders and Sen. Elizabeth Warren — the three Democrats on top of the 2020 polls — finally shared the debate stage at the same time. Sanders and Warren both support single-payer Medicare-for-all, which replaces private insurance with a national government health plan. Biden has instead endorsed a public option that allows people buy into government plan but leaves much of the current health care system in place.

At the debate, Biden knocked the progressives, Sanders bemoaned the inadequacy of the center-left’s agenda, and Warren sought to assure voters she knew how the plan, Medicare-for-all, would work. It was typical of the campaign between these three frontrunners so far.

The former vice president attacked single-payer health care as too expensive and too disruptive. Sanders parried by accusing Biden of advocating for half measures that would leave millions of Americans still uninsured. Warren, splitting the difference, attempted to fact-check some of the arguments Biden applied against Medicare-for-all, but didn’t attack his plan as directly.

The odds that a Democratic president will be able to pass a health care bill in 2021 are long; Republicans are favored to keep the Senate and there is a lot of division among Democrats on Capitol Hill.

But Democratic voters care about health care, and it has been the marquee issue of the primary so far. It is also a useful proxy for the different kind of campaigns Biden, Sanders and Warren are trying to occupy in the 2020 field.

Joe Biden: Medicare-for-all is too much too fast, pass a public option instead

Biden led off the debate embracing the Affordable Care Act — he reminds voters about his relationship with Barack Obama as often as he can — and then said he wants to introduce a Medicare buy-in that lets people pay to join a government plan but doesn’t overhaul the full system, as single-payer would.

He then pivoted to attacking Sanders and Warren directly on the projected cost of Medicare-for-all: $3.2 trillion per year, or $32 trillion over 10 years. That’s roughly what expert projections expect a national health insurance program that covers everybody with minimal cost-sharing to cost. (There is a fierce and wonky debate about whether that would actually represent savings from the existing system.)

Later, he said that “the middle-class person” would pay $5,000 more in federal taxes to cover the cost of a Medicare-for-all program. It is true taxes would increase — though he left out, and Warren quickly noted, that taxes would largely replace the private insurance premiums they pay now.

Biden emphasized that his plan, which would make the government plan available to both people who buy their own insurance and people who get coverage through work, had a price tag of $740 billion, a fraction of the cost of single payer. He touted that for the 150 million people who have employer-sponsored insurance, they would be able to maintain that coverage.

“Of the 160 million people who like their health care now, they can keep it,” Biden said. “If they don’t like it, they can leave.”

However, as his opponents would soon point out, it would also fall short of universal coverage.

Bernie Sanders: Medicare-for-all is the only option, and Biden’s plan falls short

Medicare-for-all has been Sanders’s hallmark issue since his 2016 presidential campaign, and he boasted on Thursday night that he “wrote the damn bill.”

He aggressively rebutted Biden’s attacks on single payer, hanging his counterargument on two points: the current health care system is already really expensive, and Biden’s plan would still leave millions of Americans vulnerable to financial ruin if they have a medical emergency.

“We need a health care system that guarantees health care to all people as every other major country does,” Sanders said, “not a system which provides $100 billion a year in profit for the drug companies and the insurance companies.”

“Let us be clear, Joe, in the United States of America, we have spending twice as much per capita on health care as the Canadians or any other major country on Earth,” Sanders said later.

“This is America,” Biden retorted.

“Yeah, but Americans don’t want to pay twice as much as other countries,” Sanders said.

The vice president raised a separate but substantively interesting question: right now, health insurance is part of the compensation workers receive from their employer. Biden asked Sanders whether he really thought companies would take the money they saved on health insurance under Medicare-for-all and give it to their employees in the form of higher wages.

Sanders said he thought they would. Biden scoffed: “For a socialist, you have a lot more confidence in corporate America than I do.”

So the Vermont senator went back on the offensive, trying to pin the troubles of American health care as it exists today on Biden’s way of thinking.

Sanders knows what he wants to say about Medicare-for-all — he’s been saying it for a long time — and he seemed intent on turning the spotlight back on Biden and associate him with the status quo.

Warren, on the other hand, absorbed some of Biden’s attacks and then tried to make the policy case for single payer. Earlier in the campaign, the Massachusetts senator sounded like she had reservations about Medicare-for-all. But on Thursday night, she made a forceful argument for it.

She had earlier in the campaign waffled on whether Medicare-for-all was the right path forward, but Warren has discarded those reservations in recent weeks and wholeheartedly embraced Sanders’s Medicare-for-all proposal. She has try to leave little space between the two progressive frontrunners.

At the debate Thursday, Warren was the one who was trying to make an affirmative argument for Medicare-for-all, whereas Sanders focused on Biden and the shortcomings of his more incremental plan. The moderators sought to ask her point blank whether people in the middle class would pay more money under Medicare-for-all. Warren responded:

What families have to deal with is cost, total cost. That’s what they have to deal with. And understand, families are paying for their health care today. Families pay, every time an insurance company says, sorry, you can’t see that specialist. Every time an insurance company says, sorry, that doctor is out of network, sorry, we are not covering that prescription. Families are paying every time they don’t get a prescription filled because they can’t pay for it. They don’t have a lump checked out because they can’t afford the copay.

Warren laughed off Biden’s “if people like their plan, they can keep their plan” line by quipping: “I‘ve actually never met anybody who likes their health insurance company.”

When Sen. Amy Klobuchar raised the prospect of half of Americans losing their current insurance plan under single payer, Warren argued Medicare-for-all’s virtue would be cutting private insurance out of people’s lives.

“We just need to be clear about what Medicare for all is all about. Instead of paying premiums into insurance companies and then having insurance companies build their profits by saying no to coverage, we’re going to do this by saying, everyone is covered by Medicare for all, every health care provider is covered,” Warren said. “And the only question here in terms of difference is where to send the bill.”

The 2019 fall movie season will be one for the history books
Democrats’ risky plan to ensure Congress can vote during the pandemic, explained
Here are the 9 most interesting conversations I had in 2020
Watch: Kanye West defends his support of Donald Trump to Jimmy Kimmel
Open Sourced: The hidden consequences of tech, revealed
How a beloved clinic for low-income women is fighting to stay alive in the Trump era