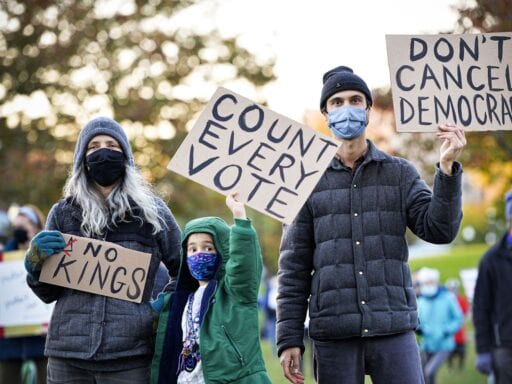 Share
Loading...
People gather to protest President Trump’s threat to contest the election results during a “count every vote” rally in Boston on November 4. | Joseph Prezioso/AFP via Getty Images

For Biden, Pennsylvania looks good, but Arizona isn’t a sure thing.

The key swing states remaining in the presidential contest still hadn’t been called as of 11 pm Eastern Wednesday. But as the count has continued, there have been some interesting results in a few states.

Five key states remain uncalled by Vox’s partners at Decision Desk: Pennsylvania, Arizona, Nevada, Georgia, and North Carolina. The expected electoral map right now is below. As you can see, Democratic nominee Joe Biden is 17 electoral votes away from the 270 he needs to win the presidency. President Donald Trump, however, is further away — he’ll need to pick up 53 of the remaining electoral votes to win.

So Biden is in a good position, but he hasn’t yet quite nailed down what he needs for victory.

Two of these five uncalled states — Nevada and North Carolina — offered little new information on Wednesday. Nevada is scheduled to significantly update its vote count at noon Eastern on Thursday, while North Carolina may not update it at all until next week, once all mail ballots are counted there.

But in the other three states — Pennsylvania, Arizona, and Georgia — the count Wednesday has had a few interesting takeaways.

Pennsylvania is all Biden needs, and the count has looked good for him

Biden’s easiest path to a victory is by winning Pennsylvania — its 20 electoral votes would get him over the top. And as the count in the Keystone State has continued to come in, analysts believe it looks increasingly good for Biden.

As was expected, Trump led Pennsylvania in the election night count. But that was purely an artifact of which votes were counted first. Democrats voted heavily by mail, and unlike many other swing states, Pennsylvania was not permitted to start the time-intensive work of processing mail ballots until Election Day. So the heavily Republican in-person votes, cast on Election Day itself, were counted first. That’s why Trump had a large-seeming lead.

But as more votes have been counted throughout Wednesday, that lead has gotten smaller and smaller — and analysts believe Biden is on track to win the state fairly handily.

The Upshot’s Nate Cohn wrote Wednesday morning that “the remaining vote in Pennsylvania appears to be overwhelmingly for Biden.” And the count since then has confirmed that analysis. Trump’s lead shrank from 700,000 votes in the morning to about 167,000 votes in the evening, with more than 700,000 ballots still to be counted.

“If the absentee votes continue to break for Biden by the margins they have so far—and as we have every reason to expect—then Biden would win by around 2 points,” Cohn tweeted in the afternoon. “And if anything, I’m conservatively rounding down on 2,” he added.

Dave Wasserman of the Cook Political Report, looking at counties that have completed their votes, concurred, tweeting: “At these rates, Biden should finish with a healthy lead in PA.”

And FiveThirtyEight’s Nate Silver tweeted that Biden has been winning the recent Pennsylvania votes counted by about 50 points — and he just needs to win them by 22 points going forward to win the state.

Trump’s allies, like his lawyer Rudy Giuliani, have pretended to believe there is something suspicious about this shift toward Biden. But I and many others wrote that this would happen before the election. And the reason it’s happening in Pennsylvania specifically is because Republican legislators in the state refused Democrats’ request to begin mail ballot processing beforehand. This is the counting method the state GOP has chosen — one they knew full well would result in a “red mirage” where Trump initially appeared to be doing better than he truly is.

Arizona is not a sure thing for Biden

Meanwhile, in Arizona, the opposite dynamic has taken hold: Biden is leading, but the late-counted vote has been favoring Trump. (Republicans had more of a history of mail voting in Arizona, and tended to return their ballots later than Democrats there.) Naturally, Trump isn’t arguing that the count should be stopped here, because the continuing count is helping him.

Biden had an impressive-looking lead in Arizona Wednesday morning. But a release of late mail votes from Maricopa County shrank that lead down to less than 3 percentage points, with hundreds of thousands of such ballots remaining to be counted in the state.

This prospect is why, even though Fox News and the Associated Press called Arizona for Biden, most other election-calling teams, including Vox’s partner, Decision Desk, have been more cautious. (Silver opined on Twitter that those who called Arizona made a “mistake.”)

The numbers in the late mail vote so far are simply not enough to rule out a Trump comeback. Arizona will likely get a great deal closer, and Biden can’t consider it a sure thing.

Finally, there is Georgia, another state where Trump appeared to be leading on election night. But around midnight Eastern time, the Upshot’s “needle” — which calculates, based on where the remaining uncounted vote is coming from, which candidate will likely be favored — suddenly showed the outcome expected to be quite close, with Biden perhaps even a narrow favorite.

The reason is that many votes remained to be counted in areas that favored Biden heavily, particularly around Atlanta. And as the count has proceeded on Wednesday, the needle proved prescient. The margin in Georgia tightened dramatically — as of 11 pm Eastern, Trump led Biden by just 0.65 percent of the vote, or about 31,000 votes.

According to Georgia’s secretary of state, there are about 90,000 ballots left to be counted. Biden is expected to be favored strongly in these counties. It’s not yet clear whether that will be enough to put him in a very small lead — but it’s looking like Georgia could be very close indeed. So close that a recount is possible.

If Georgia’s 16 electoral votes went to Biden and the remaining states stayed uncalled for now, Biden would be at 269 electoral votes — just one short of the magic number. Obviously, Pennsylvania or Arizona would put him over the top, but if Biden falls short in those states, he could also get above 270 by winning Nevada (or North Carolina, but that seems less likely).

So, again, the Trump victory scenario hasn’t yet been ruled out. But a lot would have to go right for the president in these five remaining states. He can’t afford to lose many more of them.

Reviving DACA to reforming DHS: 5 immigration issues Biden could confront as president
Why the Biden administration should establish a Department of Climate
Even most Republicans want to keep Roe v. Wade
White students in MAGA gear crashed the Indigenous Peoples March and harassed participants
A man takes over a feminist fashion brand. What happens next?
The need to read black literature that’s not just about black struggle