What will happen if a Trump n-word tape comes out? Look at the Access Hollywood tape. 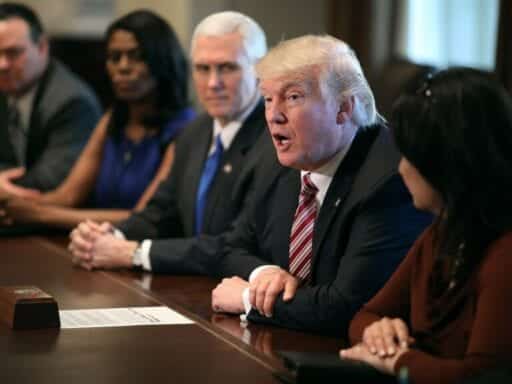 Republicans established their playbook for Trump scandals back in October 2016.

What will happen if the American public hears President Donald Trump, on tape, saying the n-word? The question feels more pressing by the day, as new recordings and comments made by Omarosa Manigault-Newman come to light.

Many are debating what effect, if any, such a tape would have on voters’ opinions. But we already have a good idea of how Trump’s party might react, thanks to his history as a candidate: The Access Hollywood tape, and Republican responses to it, set the playbook for all of Trump’s future scandals.

When the American public heard Trump, on tape, bragging about his ability to grab women “by the pussy,” Republicans in Congress were quick to express their dismay — his comments were “repugnant,” “disgusting,” and “disrespectful,” they said. But most stopped short of actually pulling their endorsements of his candidacy.

And now that Trump is president, we see the same sequence play out over and over: He does something seemingly beyond the pale, Republicans wring their hands but most keep supporting him, and the cycle begins again. There’s every reason to believe that if an n-word tape is released, we’ll see the exact same thing.

After the Access Hollywood tape came out, Republicans criticized Trump — but kept supporting him

In the days after the tape was released in October 2016, 12 senators and several governors and representatives pulled their support from his campaign. But many others offered criticism of his comments without actually calling for him to step aside.

“Donald Trump’s statements were disrespectful and inappropriate, and he was right to apologize,” said Sen. Roy Blunt (R-MO). “Most of us have done things in life that make us ashamed and call for a true apology,” said Sen. Roger F. Wicker (R-MS). “It will be important to see if Donald Trump is able to demonstrate genuine remorse and humility.”

Several members of Congress mentioned their daughters. “As a husband, father of three daughters, and grandfather of two precious little girls,” said Sen. John Boozman (R-AR), “if I ever heard anyone speak this way about them, they would be shopping for a new set of teeth.” He did not call on Trump to drop out of the race.

These comments are repugnant, and unacceptable in any circumstance. As the father of three daughters, I strongly believe that Trump needs to apologize directly to women and girls everywhere, and take full responsibility for the utter lack of respect for women shown in his comments on that tape.

I am sickened by what I heard today. Women are to be championed and revered, not objectified. I hope Mr. Trump treats this situation with the seriousness it deserves and works to demonstrate to the country that he has greater respect for women than this clip suggests.

As president, Trump has made clear that he has exactly as little respect for women as the Access Hollywood clip suggests, most recently by calling Manigault-Newman a “dog.” But Ryan and others hit on what has now become a favorite strategy: talk about how disturbing the president’s words and actions are, and then do nothing about them.

Examples of Access-Hollywood-style toothless criticism have piled up since Trump took office. When Trump condemned violence “on many sides” after white nationalist protests in Charlottesville, Virginia, last year, Ryan wrote on Facebook, “There are no sides. There is no other argument. We will not tolerate this hateful ideology in our society.” He did not mention Trump’s name.

When Ryan was asked about the president’s comments during a CNN town hall last August, he would only go so far as to say that they were “morally ambiguous” and that Trump had “messed up.”

In June, when Trump pulled his support for the G7 joint statement and called Canadian Prime Minister Justin Trudeau “weak” on Twitter, Sen. Mike Rounds (R-SD) said, “It’s better if we keep those kinds of comments and those arguments with friends, in private.” McConnell and Ryan said nothing at all.

And after Trump’s now-infamous July press conference with Putin, when the president refused to say that he believed US intelligence that indicated Russia had hacked the 2016 election, many Republicans expressed outrage — within careful limits. “The president must appreciate that Russia is not our ally,” Ryan said in a statement. “The United States must be focused on holding Russia accountable and putting an end to its vile attacks on democracy.”

Sen. Bill Cassidy (R-MD) tweeted, “It was a mistake for President Obama to give Putin more flexibility and treat him as a non-threat. President Trump should not make the same mistake. … Russia is not our friend.”

“To our European friends, we value the NATO treaty, the most significant military alliance in world history,” said McConnell. “We believe the European Union countries are our friends, the Russians are not.”

An unusually large number of Republicans are leaving Congress this election cycle. While only some have cited Trump as the reason, it’s possible that, for others, just getting out is preferable to openly criticizing a Republican president — even a president who said some of the white nationalists in Charlottesville were “very fine people.”

The inaction of Republican leaders in response to Trump’s statements reflects, to some degree, the views of Republican voters, who continue to support the president at high levels — though, as Vox’s Matt Yglesias has noted, Trump is highly unpopular with Americans overall.

If, in fact, a tape of Trump using the n-word is released, we can expect more of the same: Republican leaders and members of Congress will profess their shock and disavow racism. But will they call for the president to resign or be impeached? Unlikely.

Republicans learned back in October 2016 that when the president says something incredibly offensive, they can get away with little more than a token expression of disapproval. They have no reason to change their strategy now.