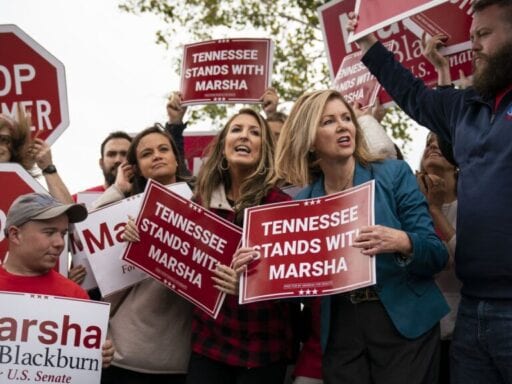 Women have been more likely than men to cast ballots early so far this year: they make up 56 percent of early voters so far in Georgia; 54 percent in Texas, Florida, and Tennessee; and 53 percent in Nevada, according to an analysis by CNN and the data company Catalist.

Given the gender gap between the parties, there’s a temptation to interpret this as good news for Democrats. But it’s too early to say for sure.

Women tend to turn out at higher rates than men in general, so it’s not a surprise that early voting would reflect a gender gap as well. “Much of the data suggests to us that people who vote early are people who would’ve voted anyway,” Kathleen Dolan, a political science professor at the University of Wisconsin Milwaukee. “Early voting is not a sign of the mobilization of people who have been absent before.”

What’s more, women — especially white women — aren’t always a reliable voting bloc for Democrats. Analyses of early voting can provide tantalizing clues about voter behavior, but with turnout for women as with everything else, the lesson of 2016 applies: It’s not over till it’s over.

Women are voting early in key states. Here’s what that tells us — and what it doesn’t.

Thirty-seven states and the District of Columbia allow some form of early voting. The rationale, as Vox’s Emily Stewart notes, is that giving people more time to cast a ballot makes it easier for them to do so.

At least 20 million people had voted as of Wednesday morning, according to CNN. But we don’t yet have comprehensive data on early voting across the country, Dolan said. What we do have are analyses of early voting in key states like the breakdown by CNN and Catalist, which looks at Arizona, Florida, Nevada, Georgia, Texas, Tennessee, and Montana.

In all those states, more women have voted than men, though in some cases the gap is relatively small — in Arizona and Montana, 52 percent of early voters were women, while 48 percent were men.

Women are leaning more Democratic this year than ever before — and much of the anti-Trump activism around the country has been led by women. But Democrats shouldn’t celebrate just yet.

Early voting is meant to give more people a chance to vote, but those who take advantage of it tend to be frequent voters who would’ve voted anyway. It takes some familiarity with the voting rules in your state, Dolan explained, to know that early voting is even an option. So early voting may not be the best way to gauge whether people who haven’t voted before, or who don’t vote often, are joining the electorate this time around.

Some analyses have also shown Republicans voting early at higher rates than Democrats — and those should be taken with a grain of salt too, Dolan said. In midterm elections, Republicans tend to have a turnout advantage over Democrats, though there are exceptions to the rule.

Of course, even if early voting numbers are a sign of a wave of women turning out to vote this year, that doesn’t mean they’ll break for Democrats in key races. “Lots of women are Republicans, just like lots of women are Democrats,” Dolan said. “This big wave could take both directions.”

After all, in 2016, 53 percent of white female voters cast their ballots for Donald Trump.

That year, “journalists evaluated the record-breaking early voting and prescribed ‘a potentially worrisome sign for Trump,’” David Catanese writes at US News & World Report. We know what happened next.

“The 2016 election suggests that we probably shouldn’t put any stock in looking at patterns in early voting,” Dolan said.