What would have happened if Hillary never married Bill Clinton? 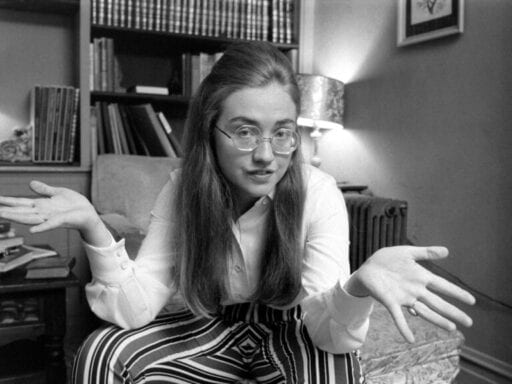 The sell on Rodham, the fascinating and occasionally icky new novel from Prep author Curtis Sittenfeld, is that it gives us a window into an alternate reality in which Hillary Rodham never married Bill Clinton. In practice, what that counterfactual means is that Rodham imagines a Hillary who is free to give rein to her ferocious ambition.

Ambition, more than anything else, is the driving force of Rodham. This novel is not particularly interested in critiquing Hillary’s politics, or even in examining them all that closely. Nor is it interested in sanctifying its central figure: While Rodham sometimes gestures at being an escapist fantasy for liberals still mourning Hillary Clinton’s 2016 defeat, it also understands Hillary as a person who is capable of monumental failures. (Sittenfeld’s Hillary Rodham does, admittedly, have substantially fewer opportunities to fail than the real-life Hillary Clinton seems to have.)

Mostly, what Rodham is interested in is examining what feminine ambition looks like when it is untethered from a man. The results are uneven. But when Rodham works, it is wildly compelling.

Rodham has two halves, and the first — in which Bill and Hillary meet cute at Yale Law — is the weakest. Here, the book never tries to be surprising, because it is covering the part of the story that matches our own world, and so all of its energy comes from the close and creepy intensity with which it covers Bill and Hillary’s budding romance.

Their connection in Sittenfeld’s recounting is both intellectual and sexual. They are each the smartest person the other has ever met, and they take a profound delight in simply talking to one another. And Hillary, who has found that that many smart boys enjoy talking to her but don’t consider her to be girlfriend material, is blown away to find that Bill is genuinely attracted to her, not in spite of her brain but because of it.

The sex scenes that ensue are genuinely shocking. I would not have thought myself capable of cringing at the thought of Bill Clinton having sex in this, our post-Starr report world. Then I read Sittenfeld’s Bill tell Hillary, “You have great tits. And your little waist, and your nice soft bum, and your delicious honey pot —”

Despite all this allegedly great sex and meeting of minds, Bill, as he must, goes on to be disappointing. He cheats; Hillary forgives him. He asks her to move to Arkansas with him after law school, putting her career on hold, so that he can launch his own political career. And Hillary, as she did in real life, agrees.

Her girlfriends disapprove, telling her that with her brains and credentials, she could go anywhere and do anything. Hillary decides that a fulfilling relationship is worth the sacrifice.

And then a woman approaches Hillary in a parking lot and tells Hillary that that Bill forced himself on her. The woman’s name is not Juanita Broaddrick, but the story she tells is similar.

Hillary is torn. She does not want to imagine that Bill could have done anything so terrible. She also thinks it’s possible that he did.

“The margin between staying and leaving was so thin,” she tells us; “really, it could have gone either way.”

It’s after Hillary leaves Bill and launches her political career that Rodham begins to really take off. Sittenfeld is free to invent, and the reality she builds is deliciously dishy.

In the Rodham universe, Hillary launches her political career by running for Senate against Carol Moseley Braun in 1992. It would be historic, she muses, for Braun to be elected and become the first black woman senator, and Braun is certainly a more exciting and charismatic candidate than Hillary is — but, Hillary concludes, Braun is running a messy campaign and is unlikely to win, so Hillary might as well just go for it. Tellingly, in real life, Braun won that election and served in the Senate until 1999. Rodham’s Hillary builds her career on an act of casual racism she never has to pay for.

In fact, freed from the Clinton baggage, Hillary Rodham’s entrée into politics is scandal-free. In the alternate history of Rodham, she is never first lady, and Bill Clinton is never president (his 1992 run is unsuccessful), so she never gives her infamous “superpredator” speech. She does not have to stand by her husband in the face of accusations of infidelity, sexual harassment, or sexual assault. The Iraq War never happens, so Hillary never votes in its favor.

Deprived of her real-life counterpart’s opportunities to err, Sittenfeld’s Hillary Rodham becomes so blameless as to be boring. Newspapers describe her as a “flat-voweled Democratic stalwart” and profile her under headlines like “Proudly Dull, Defiantly Dowdy: Hillary Rodham Is Just Fine With Being Uncool.”

But that uncoolness in Sittenfeld’s hands becomes bizarrely compelling. Her prose mimics Hillary Clinton’s public speaking style with uncanny accuracy: all that nerdy restraint, the slight stiltedness that suggests an intelligent woman who does not particularly like public speaking and who must weigh every single word before she delivers it.

Rodham’s Hillary edits casual texts to her brothers to put the positive after the negative so that she sounds more optimistic. She spends every single night wrapped up in a nylon bathrobe, drinking chamomile tea and outlining her to-do list for the next day, in an arrangement she refers to as her “nest.” She is a woman who takes deep pleasure from order and routine, who lives her life in a state of hyper control at all times.

She also would really like to be president, and she thinks she has a pretty good shot at getting there. Why not? Hillary knows she doesn’t have the charisma of a natural campaigner like Bill, but she also knows that she’s just as smart and far more capable than he is. And she wants to put her smarts to what she thinks of as the highest possible purpose. She wants to amass power. In 1997, she comes up with a path toward the presidency that she estimates will set her in the Oval Office by 2017.

In this funhouse mirror version of the 2016 election, Bill becomes an amalgam of both Donald Trump and Bernie Sanders, a dark horse who upsets a primary that was supposed to be a settled matter, a celebrity candidate with outsider cred and an enthusiastic fan base of tech-loving young men. (Bernie himself does not appear in Rodham, which seems uninterested in criticizing Hillary from the left. Trump, though, does.) Bill’s charisma and tech-world sheen make him political Teflon, unhurt by the accusations of sexual misconduct that fly around him, while Hillary finds herself accused of sexual harassment over having a junior staffer shave her legs.

As the election goes on, Bill’s avid young men supporters are overwhelmed with a profound, rootless hatred of Hillary. At his rallies, they begin a chant: “Shut her up!” And Bill, who loves a crowd, reacts with pleasure.

“He was smiling,” Hillary observes, as the chanting builds around Bill, “the way a successful man might smile if an attractive woman told him he was the handsomest man in the world. He wasn’t sure it was true. He knew it probably wasn’t. But still, it was awfully nice to hear.”

Ironically, in this book ostensibly about Hillary Rodham, this portrait of Bill Clinton is what reads as most indelible: Clinton as a charismatic predator, a feckless glad-hander willing to throw an old flame under the bus for the sake of a crowd’s approval. It feels dark and also accurate.

Hillary, however, will not be shut up. She maneuvers, schemes, and finally explodes against her critics in a cathartic expression of rage that is Rodham’s most pure expression of escapist fantasy: Don’t you wish, Sittenfeld seems to ask us, that she had actually said this? Don’t you think things would have been different if she had?

But this escapist fantasy is also what is most unconvincing about Rodham. There are certainly plenty of counterfactuals that could have changed the results of the 2016 election: What if James Comey hadn’t reopened the FBI investigation into her emails? What if the Clinton campaign had worked harder in Wisconsin? What if the 80,000-ish voters who cost Clinton the Electoral College had been geographically distributed slightly differently?

But “What if Hillary had gotten really mad and finally told the public what for?” is not convincing as one of them.

It does not, in fact, seem likely to me that the American voters who elected Donald Trump over Hillary Clinton would have been swayed by a viscerally angry Hillary. I don’t think things would have been different had Hillary finally broken down her walls and spoken her mind plainly.

That, in the end, is the tragedy of Hillary Clinton, and of Rodham: not that she married a man who is both more charming and less capable than she is, but that the public punished her for speaking her mind, and then punished her for being unable to make an authentic connection with us. It’s an inescapable trap. There were no ways out. And it’s cheap to pretend otherwise.

The word “Orwellian” has lost all meaning
Is abuse of power an impeachable offense?
Bolsonaro’s supporters in Brazil are threatening journalists and spreading fake news
Beauty YouTube star NikkieTutorials comes out as trans in a powerful video
The facts behind Trump’s bogus accusations about Biden and Ukraine
Democrats want to challenge Trump’s foreign policy in 2020. They’re still working out how.