What young Iranians think about the latest US-Iran conflict 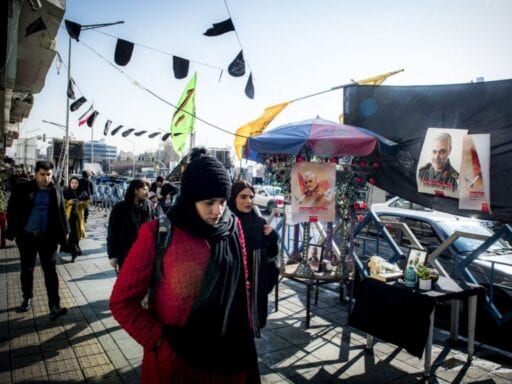 Images of Maj. Gen. Qassem Soleimani hang at a roadside vigil following a US airstrike in Iraq, in Tehran, Iran, on Sunday, January 5, 2020. | Ali Mohammadi/Bloomberg via Getty Images

Babak stays up late, so he saw the news in real time, in the early Friday morning hours in Iran. The Americans had killed Qassem Soleimani, one of the country’s most celebrated military figures, in a targeted strike.

“I didn’t know how to feel,” Babak, a 25-year-old software engineer from Bandar Abbas, a city in southern Iran, told me. “I couldn’t say I’m glad that he died, and I couldn’t say I was happy.”

Babak was shocked that the Trump administration had taken out Soleimani. But he also saw the senior military commander as an extension of the Iranian regime — a man who served the government, and not necessarily the people of Iran.

Most of all, Babak was nervous. So, too, were other Iranians Vox spoke to in the aftermath of Soleimani’s death. Nervous about what would happen next. Because Tehran would retaliate, it had no choice. And that could provoke the United States, again.

Which meant things could only get worse for Iran.

Like Babak, most of the people Vox spoke to, via encrypted messaging apps like WhatsApp and Telegram, are skeptical of the current Iranian regime. (Vox is not using full names to protect the privacy of those who participated in this story.) They’re all relatively young, educated, and tech-savvy (while Iranians have access to social media, they often need to use workarounds with VPNs to tap into Western media). And they’re just a very, very small sliver of the voices in Iran, as they themselves said.

But their complicated feelings about Soleimani’s killing are reminders that US foreign policy decisions, or even a startling Trump tweet, look and feel a lot different if you’re sitting in, or scrolling through social media in, Iran.

Iran struck back at the United States overnight Wednesday, firing a barrage of ballistic missiles at two bases in Iraq that house US troops. Though the attacks caused no casualties, it was a very public show of precision and power by Iran.

President Donald Trump, uncharacteristically quiet after the attack, responded Wednesday morning with a brief address that described Iran as standing down, diminishing the likelihood of further major armed conflict, at least the immediate future.

But he also made it clear his administration’s maximum pressure campaign against Iran isn’t over, and he announced the US is putting even more crushing sanctions on Iran.

Sanctions aren’t exactly welcome news for Iranians, who feel a lot of the pain of the economic penalties. Iran’s economy is in bad shape, and the sanctions have made it even worse.

But after days of hearing planes rumble overhead, worrying about a possible military draft, or wondering whether to flee the capital for the coast, this deescalation, even with the new sanctions, feels a little like a reprieve. As Maryam, a 20-year-old student living part-time in Kermanshah, a Kurdish city in western Iran, put it: “Iran has learned how to live with sanctions.”

“It was the worst move the US could have ever done”

Soleimani was a revered figure for many Iranians. He was touted as Iran’s protector, who defended the country against ISIS. Even those who didn’t share this view, or who questioned whether his influence in places like Syria or Yemen had really advanced Iran’s interests, understood that the death of a such a powerful man would not go unanswered.

“A lot of people around me also respected him because his job was defending Iranian borders,” Alireza, a 28-year-old working for a foreign company in Tehran, told me. “So assassinating him was really the worst move the US move could have ever done, in my opinion.”

It was a blow to the country’s pride, a brazen assassination of a senior official by the United States. “If this strike wasn’t ordered by Trump directly, if [Soleimani] had stepped on a mine or something, people wouldn’t mourn like that,” Maryam told me. “Most of the people are just angry, their pride, they’re like oh my god, Donald Trump himself — he pressed a button and then they killed him?”

Alireza said he knows a lot of people who oppose the regime and the Quds Force, the elite branch of the Islamic Revolutionary Guard Corps (IRGC) that Soleimani commanded. “But I’ve seen many of my friends changing their profile pictures to support the regime now,” he said. “They’re wanting revenge. They feel angry. Their pride is hurt, and they want the government to do something.”

A month ago, Iran was divided, with massive demonstrations of protesters agitating for change. After Soleimani, that feels lost. “The people who were chanting for change with Iran’s relationship with the world. They have lost their voice, they cannot speak up now,” Alireza said. “Everyone is now quiet.”

More than one person referred to it as a forgetting, as if Soleimani’s death had created this collective memory lapse. “The regime violently cracked down on the protests,” a 23-year-old student at the University of Qom told me. “It was like the people total forgot that this guy stands for this kind of act against people. It somehow surprised me.”

“But,” the student added, that “was before the tweet of Mr. Trump. Then I [thought], ‘maybe the people, they are right. We should support the regime.’”

Trump’s tweets really do matter. One, in particular.

Two days after Soleimani’s killing, Trump tweeted a disturbing threat: “[I]f Iran strikes any Americans, or American assets if Iran struck any Americans, or American assets, we have targeted 52 Iranian sites (representing the 52 American hostages taken by Iran many years ago), some at a very high level & important to Iran & the Iranian culture, and those targets, and Iran itself, WILL BE HIT VERY FAST AND VERY HARD.”

Trump’s threat to strike cultural sites invoked the possibility of a war crime. Members of his cabinet, including Secretary of State Mike Pompeo and Secretary of Defense Mark Esper, tried to walk the comments back, dismissing it as “hypothetical” and saying the US would follow the law.

But many Iranians took Trump seriously. “When you threaten cultural sites, people do believe him, because it kind of feels like he’s crazy,” a 26-year-old masters student working in public relations who lives in Tehran, told me.

For some, the promise to attack cultural sites also proved that, despite all of Trump’s rhetoric, he — and maybe his administration, too — didn’t actually care about the Iranian people after all.

Maryam, the student from Kermanshah, said she once believed Trump separated the Iranian government from the people. That’s how she saw the economic sanctions: as punishment against the regime, not the people.

But when Trump threatened to bomb Iran’s cultural sites, she thought, what harm would that do to the government? None. “That’s when we realized he isn’t anti-regime, he’s just anti-Iranian all along, and we didn’t know it,” Maryam said.

She was never a fan of her government. But she said that in talking to her friends over the past week, she came to an understanding: There is no good side — not the regime, not Trump, nothing. “This regime is the worst, but Donald Trump is the worst,” Maryam told me. “At least this regime is Iranian.”

Even those like Sepehr, a 22-year-old student in Tehran who saw the regime’s focus on the mourning of Soleimani as just another example of regime propaganda, said he was put off by Trump’s tweet.

“Today, I had an exam that was about restoration of historical places — I’m not kidding,” Sepehr told me on Tuesday. “It was very weird, because I thought, why are we testing this because Trump is probably going to ruin it?”

“That’s that the only thing that I’m mad about it,” he added. “He says he loves the people of Iran, but he doesn’t care about the culture, or the cultural places.”

A pause in an escalating US-Iran conflict, but so much uncertainty about what comes next

“Ohhh war started,” a WhatsApp user from Iran messaged me Tuesday night, as reports of Iranian missiles hitting al-Asad base in Iraq began to break.

Babak was up again; it was about the same time of night as it had been the week before when the attack on Soleimani happened. In Bandar Abbas, which is close to the Strait of Hormuz, he heard the sounds of airplanes. “Seeing airplanes in the skies we thought that’s [it], we’re officially in war with US.”

Maryam also said she couldn’t sleep that night. “Well, there you go,” she thought. “We’re [entering] war with the United States.” It was one of the worst nights of her life, she told me.

Maryam finally fell asleep at 6 am. But when she woke up later and saw that Trump had tweeted “All is well,” and that no Americans had died, she knew they weren’t at war.

Trump’s speech Wednesday may have quashed fears of an imminent conflict. But several people we spoke to said that while this might, hopefully, be it for now, the fallout from Soleimani’s death is still undecided and unresolved.

Mehedi, a 23-year-old student in Tehran, told me he didn’t think this was over, and now no one was paying attention to Iran’s real problems, like human rights abuses. “I’m just worrying about my future, my life,” he said. “I don’t know what will come for me.”

Then again, as Sepehr, the architecture student, wrote to me after Trump’s speech: “But at least it’s not actual war.”