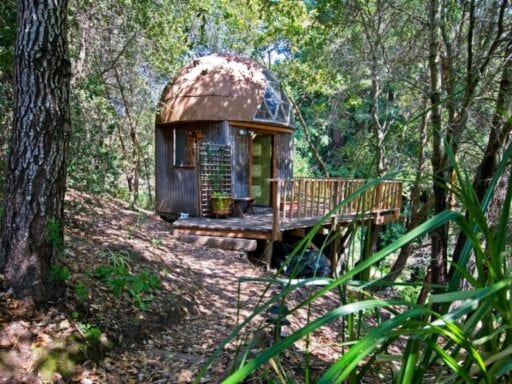 This mushroom-shaped dome outside Silicon Valley helped make Airbnb what it is today.

Instead of an alabaster cave in Santorini, or a swank penthouse on Manhattan’s Upper East Side, or a Beverly Hills estate dripping with intrigue, the most visited Airbnb in the world is a squat cabin with a bulbous, mushroom-shaped roof in the sleepy Northern Californian coastal town of Aptos.

The owners, Michael and Kitty Mrache, have held that title since joining Airbnb in 2009, one year after the short-term rental giant launched, but long before it became truly ubiquitous. Today, the “Mushroom Dome,” which features a tiny bedroom, two beds, a kitchen, and a wooden patio, is almost entirely booked up till January 2020. Each night costs $130, and the listing itself averages around three million views a year.

Kitty Mrache, who is 69 and spent much of her earlier life as a stay-at-home mom, tells me that initially, the Mushroom Dome was constructed on her parents’ property as temporary housing for a friend. After her folks died, the Mraches transported the Dome to her own land, and opened it up to short term tenets.

The cabin, built with an Emersonian deference to nature, is humbly picaresque, like a Wes Anderson still come to life. Mrache considers herself a good host, and ensures that her listing is a peaceful retreat from Silicon Valley, which sits on the other side of a mountain range from Aptos.

In Airbnb’s early days, most of the dome’s renters were refugees from the tech center who wanted a few days away from the chaos. But as the platform exploded, so too did the legend of the Mushroom Dome. The Mraches aren’t the only people to have a quirky homestead listed on Airbnb, but they were at the right place at the right time. Kitty has now booked people from around the world — China, Argentina, Denmark — who want to see the hamlet for themselves.

In that sense, the Mushroom Dome is just another one of the weird mutations of the new media era which has transformed Airbnb into a worldwide surrogate of the hotel industry, and an agent of gentrification. With some charming carpentry and a few crosshatched windows, the Mraches stumbled into a structure that’s perfectly tuned to the internet’s taste — the sort of anonymous, luxuriant simplicity that presents beautifully on an LCD screen. (At least one influencer has taken pregnancy photos there.)

Kitty, who says that she doesn’t really seek out publicity, has been wrapped up into that paradigm, and now owns one of the most iconic buildings in a major tech company’s portfolio. Still, she’s proud of her title, and now operates a second Airbnb listing, the “Hummingbird Haven,” which also does good numbers. We talked about that, as well how she helped Airbnb hack Craigslist, how the Mushroom Dome’s fame grew and changed her life, and what she thinks the principles of a successful Airbnb host should be.

What’s the history of the Mushroom Dome? Did you construct it specifically because you wanted to rent it out?

It was actually built by a friend of mine who had become homeless. She asked if she could bring a trailer and two daughters out here. The housing in this area is extremely short and expensive — because we’re a small mountain range away from Silicon Valley. So we agreed, and the trailer was actually put up on my parents’ property. Then she wanted to build a cabin, I said, ‘Well it can’t be more than 100 square feet.’ She linked up with a designer and [off they went.] So she lived out here for about 10 years, then she got married and left.

Since the cabin was on my parents’ property, when they passed away we had to sell their place and move the cabin. We built a foundation, hired a crane and a flatbed truck, and brought it down the driveway.

So you moved the entire property?

The entire cabin. But it was only a little pentagon at the time. It was very small. Then we added a deck, and a little bathroom, and a place to make some tea or coffee or whatever. I designed my house for two kids and I ended up with four, so when they come to visit, it’s hard to find them a place to stay. I didn’t want to rent it out to a full-time renter. But my adult kids don’t come to visit very often, so I thought I’d rent it out on Craigslist. And that wasn’t much fun — people would say they were coming and not show up.

Because running short-term rentals online was more like the Wild West in those days, right?

Yeah, this was the summer of 2009. People didn’t pay me ahead of time on Craigslist, so there was no way to see them coming. I started to click on other Craigslistings to see how people handled the money, and I ended up on Airbnb’s website. My response was, ‘Woah this is incredible! It’s such a wonderful service.’ So I signed up immediately and Airbnb gave me the HTML to embed [the Airbnb listing] in the Craigslist. It was a little hack.

I knew HTML, I wanted to make some changes to it because I feel like it didn’t say enough about the cabin. So I saved it to my computer, made some changes to it, and then embedded it to Craigslist. But then Craigslist found out what Airbnb were doing and told them to stop.

Yeah, because 2009 was definitely before everyone knew about Airbnb.

Oh my gosh, nobody knew about it! I was talking about it all the time, and people had never heard of it. They had four or five employees when we joined, they were working out of their apartments, and within two weeks we were booked 100 percent of the time. Little did we know, that was very unusual.

What do you think makes the Mushroom Dome so popular? The affordability? The quirkiness? The location?

I think all of that. But first of all, we were the first place in nature around the Bay Area [on the site.] So people in the city who want to get out of the city to find some quietness. Santa Cruz is a very major tourism destination. Monterey and Santa Cruz. We’re only 45 minutes from Silicon Valley but it’s a completely different environment. When we joined, all of Airbnb listings were in either San Francisco or Brooklyn. We get over three million views a year now.

The Mushroom Dome has become famous, do you think that’s a draw too? Do people ever book it because they’re interested in staying in the most popular Airbnb in the world?

I think we have, more lately in the last year. It really spiked in popularity when The Guardian in San Francisco did an article on us in 2015. The Guardian is an international paper, and I don’t know how many different publications have based their articles on that piece. But I know there’s been a newspaper in Argentina and one in Denmark [that have written about us,] and I’m pretty sure there’s been one in China because we’ve gotten a whole bunch of interest from people in China all of a sudden. We see the number of views each day. Usually it’s around 10,000, but sometimes it jumps to 30,000. That’s when you know something has been written.

Most people who host Airbnbs deal with a couple of guests a month on the weekends. But you’re booked year-round, months in advance. How much work is that for you?

Well, fortunately, one of our friends does the cleaning for us now. So I do spend a lot of time communicating with guests online, and when they get here. I like to get to know the guests and not just say, ‘Here’s a key, bye.’

It’s been huge. It’s been really wonderful. We’ve been able to save money for the first time in our lives. And also to be able to help out our adult children. We had to declare bankruptcy back in 1997. Raising four kids on one income is a challenge these days. It made it possible for Michael to retire, and not work into his 70s. It’s a wonderful gift. All I wish for is Airbnb to give stock options to some of its earliest renters. (laughs)

We know it’s made a big difference in our community too. Our guests have paid over $50,000 to the county in transient occupancy tax.

It’s pretty incredible that the most popular Airbnb in the world is a weird, quirky cabin, rather than a castle in Andalusia or something. What advice would you give to other Airbnb hosts to try and mirror your success?

First of all I’d recommend they be an Airbnb guest elsewhere, so they’ll understand what makes a place memorable and comfortable. When I’ve stayed in places, the ones I’ve liked the best are the ones where the hosts were present. I got to know them, I got the feeling that the place belongs to someone. Make it cozy, make it clean, but invest your time in your guests. Let them know that they’re safe, and they can have questions answered. It really bothers me to stay in Airbnbs where I don’t even meet the host — where I get a keycode and that’s it.

What are some of the most memorable guests you’ve had?

We’ve had a lot of people come here for honeymoons, anniversaries, and birthdays. But I have to admit that my most memorable guests have been Airbnb employees. It’s been wonderful getting an inside view of Airbnb from them. They’ve all been incredibly friendly.

I imagine you never expected to have a second career, later in life, as a host. How do you reflect on how much your life has changed in the past decade?

It’s very surprising to me. I’m not really one to seek out publicity. It’s kinda like the world comes to me. We’ve had people from over 50 countries. Literally, the world is coming to me. It’s so weird to do a search for my property to see thousands and thousands of people referring to us. I’m not really good at taking advantage of it.

You talk a lot about kindness in your own hosting strategy. When you have a place booked up every day, how are you able to make sure everyone feels special? How are you able to still be so generous with your time?

It’s just my nature. I love people. I love to make them feel comfortable and have a wonderful experience. I think that’s at the heart of the “Superhost” — they care about their guests, they’re not just in it for the money, hopefully. I had no idea how much money I’d have flying in. I thought people were going to just rent it on the weekend.

Can the fire catastrophe make Australia’s government finally act on climate change?
This conversation explains a vital reason Trump is so popular on the right
The environment and economy are paying the price for fast fashion — but there’s hope
Trump failed on the opioid crisis — and Democrats are letting him get away with it
How to be a good white ally, according to activists
How to watch Trump and Biden’s dueling town halls on Thursday