What’s next for the MAGA merchants of Etsy? More Trump. 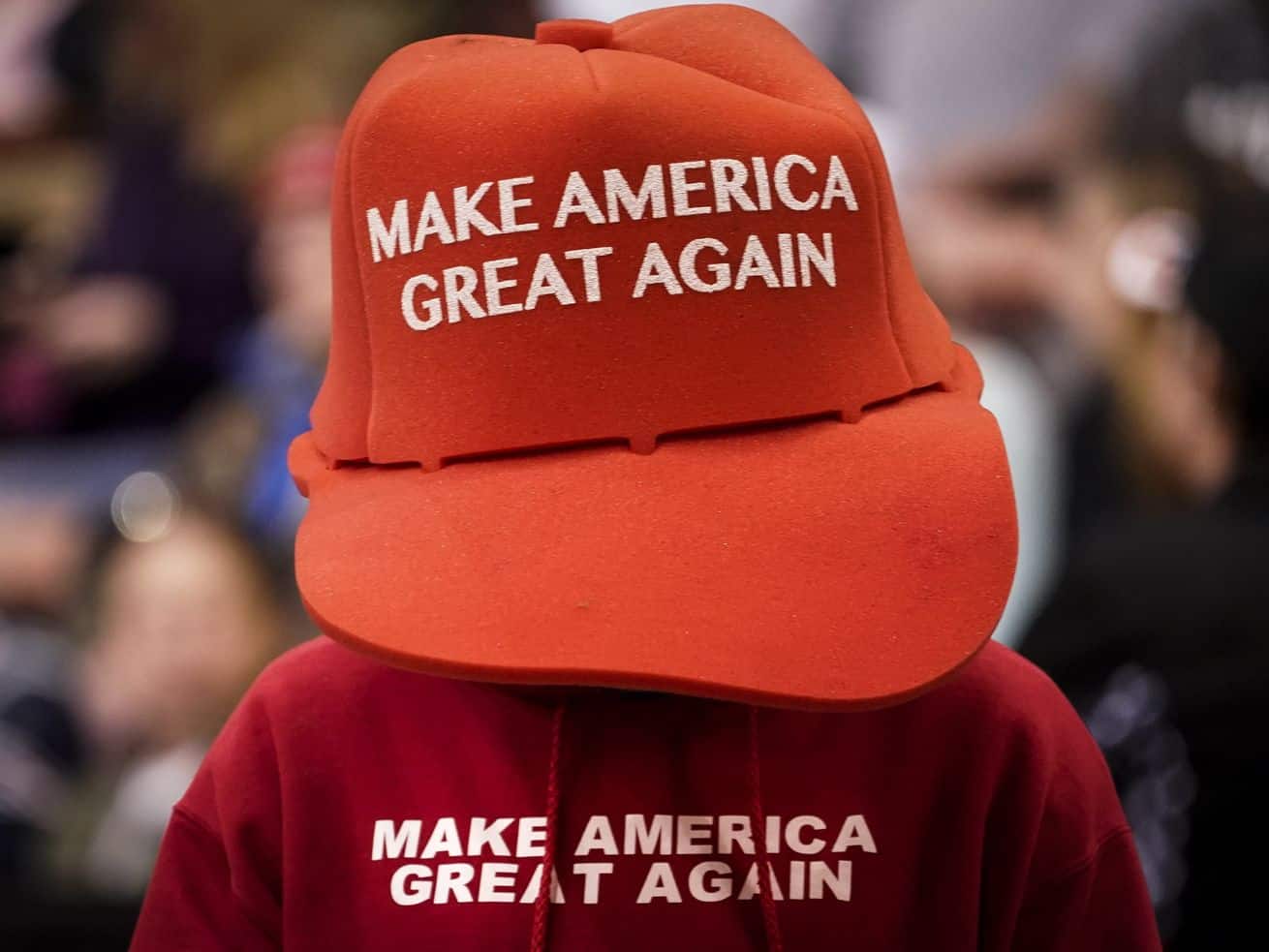 While the former president has been banned from Shopify, independent sellers are still pushing Trump gear.

Jonathan Babin sells small, faux-marble Mount Rushmores on his Etsy account for $19.99. On the extreme right side of the statue, next to George Washington, Thomas Jefferson, Teddy Roosevelt, and Abraham Lincoln, rests the chiseled visage of Donald Trump.

The former president looks as he did during his time in the White House, sticking out like a sore thumb among the other presidents, though Babin has equipped him with a slightly sharper chin and a stout, flattop-like haircut. “Originally it was a gift idea for my boss,” he tells me, over Etsy’s messaging platform. “He sent a picture [of the sculpture] to a few of his friends and all of a sudden I had 20 orders.” Currently, it is one of two items on Babin’s shop — the other is a homemade salt-and-pepper shaker set shaped like Elon Musk’s SpaceX rockets — but the Trump Rushmore set is by far Babin’s most successful venture. “We’ve sold over 150,” he says, adding that he’s only noticed a brief dip in sales since the election. “I think the only reason they went down was because all my customers were in jail from the Capitol events.”

The Trump era has finally drawn to a chaotic close. Joe Biden is in the Oval Office, and the remaining tendrils of the movement — torchbearers like Josh Hawley and Madison Cawthorn — are condemned to the congressional minority for now. Still, over those four years, the Trump administration gave rise to a radicalized class of MAGA shops, MAGA influencers, and MAGA designers who provided the shirts, coffee mugs, and doodads that reinforced the corporeality of MAGA identity. Now, they must hope that the ideology is hardy enough to endure a comprehensive Democrat surge; that the thirst to see Donald Trump immortalized on Mount Rushmore will persist through 2021, 2022, and beyond, proving once and for all that MAGA-ness is viable with or without the man himself.

Currently, it is impossible to purchase official Trump campaign merchandise on the internet. The fallout from the insurrection on January 6 motivated the tech sector to banish the then-sitting president from their servers, and that includes e-commerce. Trump sold the bulk of his swag through two digital storefronts on Shopify — neither of which were left standing after the purge. (“We have determined that the actions by President Donald J. Trump violate our Acceptable Use Policy, which prohibits promotion or support of organizations, platforms or people that threaten or condone violence to further a cause,” said a Shopify spokesperson in a statement.)

In fact, the only formal retailer currently hawking Trump material is the mostly apolitical Trump Organization, which has a catalog that browses like an uncanny time warp to the mid-2000s, long before the man became permanently entwined with US politics. There are no straight-up MAGA hats in sight, but you can purchase champagne glasses gold-embossed with the word “Trump,” or a package of Trump jelly beans.

For now, the future of MAGA fashion rests in the hands of independent store owners, who are eager to pick up the slack in the president’s absence. Land of the Free Designs is one of the most prolific Trump stores on the internet. Since launching in 2020, the company has paid tribute to the 45th president with countless different Anthropologie-esque accessories. Here he is, hiding behind the sequins of a plush couch pillow. Here is a shirt emblazoned with the classic Beatles Helvetica, reading instead “Jesus, Trump & Freedom.” You can find more general right-leaning gear in stock (there is T-shirt printed with the words “0% Liberal”), but the store owner, who prefers to remain anonymous, says that the Trump swag always outperforms the rest. If there is to be a dampening of the MAGA fervor — if Trump supporters have moved on from relitigating the 2020 election and the subsequent baseless voter fraud investigations — most vendors haven’t witnessed it yet.

“My sales have been steadily increasing, with my all-time highest sales in December,” says the owner. “I couldn’t say for sure, but it’s possible the December sales went up due to people wanting to show their support for President Trump after the election. I had fewer sales the first week in January, but actually since January 6 my sales have gone up.”

This isn’t the typical path for presidential branded merch. As the New York Times has reported, most of the time, campaign merch is treated like junk as soon as a candidate comes up short in the Electoral College. Alexander Waters knows that all too well. He ran the Knox County, Tennessee, operations for Mitt Romney in 2012, and tells me that his office produced a ton of shirts and hats for the Republican nominee that were rendered immediately outdated after Barack Obama secured his second term. “We had 300 or 400 shirts left over, and they ended up in my condo, just sitting there,” he says. “My bedroom got a lot smaller.”

It became clear to Waters that there wasn’t a dedicated pipeline for obsolete political detritus. Mitt Romney did not come calling to collect his shirts; nobody was looking to wear an “America’s Comeback Team” shirt anytime soon. Waters made contact with his aunt, who runs an orphanage in Nairobi, Kenya. He asked her if she could use some shirts for the kids, and passed along the defeated Romney swag. Her aunt escorted the gear across the Atlantic and distributed the clothes on the following Fourth of July. “I was just talking to her this past Thanksgiving, and she tells me that she still sees those Romney hats in Nairobi,” says Waters. That is one of the oldest lessons of campaigning: Nothing depreciates faster than the accoutrements of a failed bid.

So perhaps it’s fitting that Donald Trump — one of the most unconventional politicians in American history — is inheriting an unorthodox fate for his civic brand. He will likely become one of the few, if not only, presidents on the receiving end of fresh new independent campaign manufacturing gear long after his stint in the White House is over. The Etsy shops I spoke with made that prerogative clear, and some of the movers and shakers on the extreme right, like comedian/conspiracy theorist Terrence K. Williams and newly sworn-in Rep. Marjorie Taylor Greene, are already pledging to keep their MAGA hats on indefinitely. It’s a trend that makes you consider how the movement that Trump curried may be well on its way to transcending Trump itself — a future where MAGA fashion becomes a concrete part of the greater American mythology, more so than anything produced for Clinton, Obama, Bush, or Reagan.

Already, the GOP is buckling under the weight of relative newcomers — upstart members of congress like Madison Cawthorn and Lauren Boebert — who are eager to recapture Trump’s lingering resonance for their own political fortune. (Greene has appeared on the House floor with a mask that reads, “Trump Won.”) But thus far, none of them have been able to replicate the former president’s branding empire. In fact, I can only find one non-derisive Greene item on Etsy. It’s a coffee mug, stamped with the initials MTG. Trump still dominates the field. His presidency might be over, but the legend has only just begun.

So, is there anything in American political history that mirrors the trajectory of MAGA fashion? Is there precedent for campaign gear, built for an election cycle, condensing into a more decentralized cultural statement? I reached out to Jon Grinspan, a curator at the National Museum of American History, who pointed to the Confederate flag as a useful analogue. After all, the Trump presidency and the Confederacy are both products of their own eras, and like the rebel banner, it’s possible that MAGA-ness could inherit a new, less-bespoke correlation to reactionary dissent as the four years between 2016 and 2020 fade into memory.

“I think people continue to buy and wear MAGA stuff as a symbol of resistance and lost cause. And when you think about the Confederate flag, people who have little connection to the failed country from 160 years ago will use it as a bumper sticker,” explains Grinspan. “You’ll see it in Minnesota or New Jersey — states that weren’t even part of the Confederacy. I think for the rest of our lives, when we see someone in a red MAGA hat, we’ll understand what kind of statement they’re making.”

Grinspan also makes the point that populist candidates in the US tend to achieve a superior echelon of fashionability. He notes that Sen. Bernie Sanders has rounded out into a folk hero across his past two presidential runs. His widely memed mittens moment at the inauguration has already metastasized through Etsy, some of the items with overtly Bernie-ish political overtones. (“Waiting for my stimulus,” reads one shirt, with Sanders’s cross-legged silhouette front and center.) Going back much further, Grinspan highlights William Jennings Bryan, a perennial Democratic candidate who mobilized a working-class coalition with his progressive platform in the late 19th century. Bryan never secured the Oval Office, but his supporters were happy to totemize the vision he inspired in them.

Imagine that, the Red Hat broadcasting a deep, bygone melancholy as Etsy shops continue to churn out Trump gear for an unwavering crowd of MAGA veterans who refuse to give up the ghost. It’s far too early to see what lies ahead. Trump remains the presumptive frontrunner for the Republican nomination in 2024. Unlike William Jennings Bryan, there is a real path for the MAGA movement to regain its power. Maybe they’ll have the last laugh, when all of the merchandise they’ve purchased in the intervening years is justified at the next inauguration. The only truth everyone agrees on is that these customers aren’t going anywhere, and that the MAGA ideology has firmly barnacled to our culture — no matter who is in control of the GOP. That’s great news for these retailers, and a potentially troubling omen for the country.

“I think Trump supporters are determined to show their support for our president despite constant lambasting by the media,” says the Land of the Free Shop owner, when I ask them if they expect their sales to ever tail off. “However, my shop is a conservative shop and not an exclusively Trump shop. Conservative values will still be around whether Trump is in the limelight or not.”

Kansas’s ag-gag law has been ruled unconstitutional
Why anyone could win Georgia’s runoff elections, according to the polls
Millions of Americans can’t pay rent
How Robert Pattinson transformed into a salty lighthouse keeper for his new movie
Why firing squads are making a comeback in 21st-century America
Nevada Democratic debate: February 19, 2020