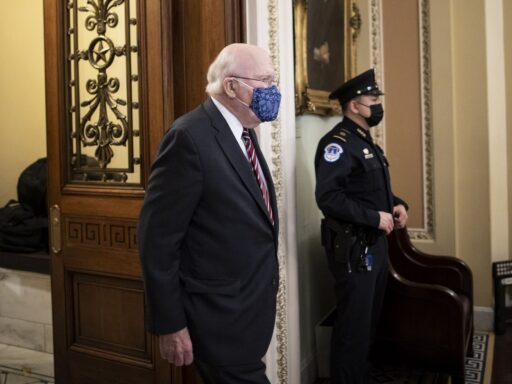 The House transmitted its article of impeachment to the Senate. Here’s what we know about the trial.

The House of Representatives officially presented their article of impeachment of Donald Trump to the Senate Monday evening, setting up his second impeachment trial and the first ever of a former US president.

That main action in that trial is still about two weeks away, set to start around February 9 (though we’ll be seeing documents — including Trump’s response to the charges — sooner.) Many details about how the trial will be structured and proceed remain unsettled, though it will likely be short. Majority Leader Chuck Schumer said Sunday it will “move relatively quickly” because the Senate has “so much else to do” — for instance, confirming President Joe Biden’s nominees, and trying to pass a coronavirus relief bill.

Trump became the first ever president impeached twice days before he left office, with the charge being “incitement of insurrection,” related to his attempting to overturn his presidential election defeat and egging his supporters on to interfere with Congress’s count of the electoral votes on January 6.

The lead House impeachment manager, Rep. Jamie Raskin (D-MD), read the charge on the Senate floor Monday. “President Trump gravely endangered the security of the United States and its institutions of Government,” Raskin said. “He threatened the integrity of the democratic system, interfered with the peaceful transition of power, and imperiled a coequal branch of Government. He thereby betrayed his trust as President, to the manifest injury of the people of the United States.”

Because Trump is now out of power, the main issue at stake will be whether he should be banned from holding federal office in the future. But despite the violence and five deaths that took place when his supporters stormed the Capitol, Trump’s conviction still seems a tall order — because it would require a two-thirds majority of the Senate, which means at least 17 Republican senators. And there have been few signs of late that such Republican support will materialize.

How a Senate impeachment trial works

Though senators will be sworn as jurors this Tuesday, Trump’s trial isn’t really getting started yet — Schumer and Minority Leader Mitch McConnell have agreed that both the prosecution (the impeachment managers designated by the House of Representatives) and the defense (Trump’s team) will have at least two weeks to prepare, to submit required pretrial briefs, and to respond to each others’ briefs. During this time the Senate will vote on more of Biden’s nominees.

The action of the trial itself will kick off in two weeks — on the week of February 8. And since there’s no set-in-stone guideline for how an impeachment trial is structured, the first step will be for the Senate to try and pass a resolution laying out how things will go.

For Trump’s previous impeachment trial under a GOP-controlled Senate, presided over by Chief Justice John Roberts, there were essentially three main phases of action. First, the prosecution had several days to present its case, in opening arguments. Second, the defense presented opening arguments, also over several days. And third, senators got to submit questions for each side’s legal team to answer.

The Senate could have opted to continue the trial after that — but they did not. Republicans then voted against calling any witnesses, and decided to proceed to a verdict. And on February 5, 2020, they made that verdict official — acquitting Trump on both articles of impeachment, 52-48 and 53-47. (Remember, it takes a two-thirds majority — 67 votes — for conviction, so they weren’t particularly close. Mitt Romney of Utah was the sole Senate Republican who voted to convict Trump, on one of the articles.)

Trump’s second impeachment trial will likely be structured similarly to the first, but with some differences. For one, because Trump is no longer the sitting president, Chief Justice Roberts won’t preside — Senate president pro tem Patrick Leahy (D-VT) will instead. Additionally, relevant documents from federal agencies (which could shed light on, say, why the National Guard wasn’t mobilized sooner as protesters stormed the US Capitol) may be more available, if the Biden administration chooses to hand them over. (The Trump Administration famously withheld cooperation from the impeachment inquiry in 2019, spurring the House to make that the basis for the second of his two articles of impeachment then: obstruction of Congress.)

A major problem for Senate Democrats making decisions about the trial is that the question of whether Trump will be convicted is not up to them. If all 50 Democrats vote to convict Trump, 17 Republicans would have to join them, or else Trump would just be acquitted again.

So in deciding how to structure this trial — particularly how much time to allot to it compared to Biden’s other priorities, whether to call witnesses for testimony, and how much they should work with McConnell on shaping it — Democrats also have to make up their minds on what they are really trying to achieve here.

That is: is convicting Trump a real possibility, or a pipe dream?

Because if conviction actually is on the table, it would be enormously consequential for American democracy, due to the prospect of disqualifying Trump from running for president again in 2024. Trump’s actions since November (and, of course, many of his actions before) show that he personally is a major threat to the functioning of our electoral system. And while he may seem beaten and discredited now, he remains quite popular among Republican voters and a political comeback for him is a real possibility.

In the days after the storming of the Capitol, various anonymously-sourced stories appeared suggesting that McConnell and other Senate Republicans really were open to convicting Trump. But of course, anyone familiar with Senate Republicans’ conduct in recent years is aware that they tend to find their way toward sticking with President Trump eventually. Few were willing to speak so boldly in public, and in the House, just 10 of the 207 Republicans present voted to impeach Trump

Predictably, on Friday, CNN’s Manu Raju, Ted Barrett, and Jeremy Bird reported that, per their interviews with more than a dozen Senate Republicans, “only a handful” in the GOP conference “are truly at risk of flipping to convict the former President.” Several who are hesitant to outright defend Trump’s post-election conduct have latched on to the argument that it’s unconstitutional to hold an impeachment trial for a former president. (As Ian Millhiser writes, there’s not really a clear answer to this question, but it’s a convenient dodge for Republicans seeking to cloak their defense of Trump in a newly-discovered supposed constitutional principle.) In any case, for conviction to succeed, Democrats would need a lot more than a handful.

If the impeachment trial is already headed toward certain acquittal, it may not change some things how Democrats hope to structure the trial — they’ll surely want to try and make a strong case regardless. But it would certainly affect their decisions about how much time they want to spend on it. The recent tradition has been that while the Senate holds a presidential impeachment trial, it puts all other business aside — meaning all confirmations and legislation would grind to a halt. Democrats have floated a half-day impeachment, half-day ordinary business, but it’s unclear if that would pass muster from the Senate parliamentarian’s office, and even that would curtail their ability to pursue Biden’s legislative agenda.

This may be why Schumer has already suggested he doesn’t want to spend too much time on the trial. Because if it’s anything like Trump’s last impeachment trial, little that happens there will change any senator’s mind.

Congress might finally have a deal to stop surprise medical bills
Trump’s tall tale about the military being out of ammunition shows how his lies evolve
How to watch Barack Obama’s speech in South Africa
Hillary Clinton blasted Trump on Twitter before his meeting with Putin
Report: Microwave weapons may be behind mysterious illness afflicting US officials abroad
A comprehensive guide to the new science of treating lower back pain