What’s wrong with a President Pence? 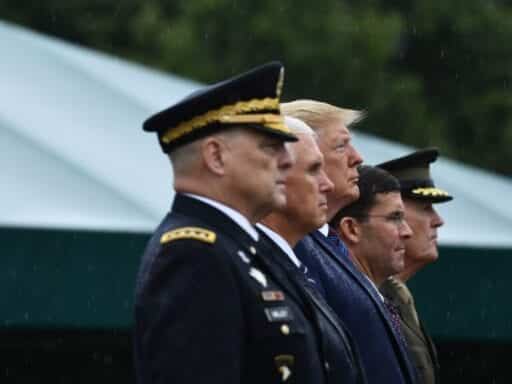 Why most conservatives aren’t calling for Trump to step aside.

To left-leaning observers appalled by what they view as President Donald Trump’s reckless behavior and lawbreaking, that’s the most mystifying aspect about the Republican Party establishment: Party elites seem determined to stand by the president despite the constant whirl of scandal, inappropriate behavior, and outright chaos that surrounds him.

It’s one thing, these observers might argue, for conservative voters to decide that they would prefer Trump to a Democrat. The proximate question posed by impeachment, however, is whether or not conservative voters would rather see Vice President Pence, a conventional Republican seemingly without the baggage of Trump, take over in the White House.

But beyond the simple realities of Team Red versus Team Blue, this left-wing viewpoint is all too blinkered, missing the fundamental point of Donald Trump: He isn’t just a president for many on the right; he’s a bulwark, a fighter, a state of mind with an 87 percent approval rating among Republicans. And Pence? As one conservative pundit told me, “He’s weak and clueless and totally unimpressive.”

Trump stands accused by his enemies of, in essence, fighting dirty. But to conservatives who sincerely believe themselves to be under assault from an increasingly left-wing movement that itself fights dirty, that’s more a feature than a bug.

The pros of President Pence

Of course, there are some conservatives who might not see it this way. As conservative pundit and writer Erick Erickson, who is supportive of the president, wrote earlier this week, “I think if [Trump] said tomorrow that he had made America great again and was passing things off to Pence, we would be in a better place.”

Similarly, to the American Enterprise Institute’s Jim Pethokoukis, Trump’s advancements on conservative policy priorities are perhaps hindered by the drama and chaos emitting from the White House on a near-daily basis.

If GOP senate expelled Trump from office, after about two weeks of no-drama Pence, most Rs might be like, “I can live with this.”

In a conversation with the Atlantic’s McKay Coppins, Erickson made the same point, telling Coppins in an email that some activists on the right are getting tired of the circus that is this administration. He added, “I have talked to a handful of politicians who would never say anything publicly, but they do think 2020 is going to be tough for Trump, and Pence could neutralize some of the antagonism.”

To social conservatives who love Trump’s judicial nominees but perhaps not Trump himself, Pence does seem like a more appealing personal figure and role model. He was chosen for the vice presidency in part because of his close affinity with evangelical Christians, as well as because of his political experience as governor of Indiana and a member of the House of Representatives.

I asked Rod Dreher, senior editor at the American Conservative, about the possibility of a President Pence, who I said seemed “certainly more in line with the views and values of social conservatives” than Trump. Dreher offered this: “I would rather go to war in 2020 with President Pence than Donald Trump. Certainly, I think a President Pence would be a far more effective leader of the GOP agenda than Trump.”

But he went on, telling me, “But I think we shouldn’t kid ourselves. Having Pence as president would require removing Trump, obviously, and the metaphorical violence of that act would have consequences on the right that are hard to predict. The 2020 election, with Pence leading the ticket, would be all about Trump — and, on the right, about avenging him.”

To most of the right, however, it’s not just the tactical impossibility of swapping in Pence without first waging a brutal intra-party battle that’s the problem. Rather, it’s the fact that a swath of the conservative movement views Trump as the person best equipped not to advance conservatism, but to fight the left — to them, a more critical effort in 2019.

The real problem with Pence

I spoke to a number of conservative writers, radio hosts, and pundits for this piece. And many of them agreed that the reason why conservatives weren’t happy with the Pence option is the simple fact that Mike Pence is not Donald Trump. Or, as National Review writer David French told me, “Trump’s base believes that Trump — not Pence — is the guy who’s best-equipped to fight the Democrats. So that’s not their calculation.”

Another very prominent conservative pundit was even more brutal about Pence, saying, “I know him well. I’ve never heard him say an interesting or insightful thing.”

It’s obvious Pence and Trump are more different than alike as personalities, with Pence as the “establishment” choice to some. But to many conservatives, that’s a good thing. They’re convinced that the real lesson of 2016 is that an aggressive fighter like Trump makes a superior politician to more strait-laced Republicans like Mitt Romney. And that makes Trump look like a far better option than Pence, no matter what.

Josh Hammer, editor-at-large at Daily Wire, told me, “From a traditional, Reaganite, National Review-esque ‘three-legged stool of conservatism’ perspective, Pence is undoubtedly more traditional and “classically conservative” from Trump.” But Hammer said that in his view, “The right is fundamentally under siege from the left,” and so now “there is a profound desire by many on the right for a blunt, crass instrument to push back against this.”

In our conversation, Hammer referenced the Brett Kavanaugh Supreme Court nomination hearings, a topic that comes up almost every time I speak with conservatives. And Hammer, like most conservatives I speak with often, drew two lessons from that fight: The left will stop at nothing to smear innocent conservatives, and a typical Republican Party politician, more concerned than Trump with elite opinion, would have backed down and rescinded Kavanaugh’s nomination. Trump’s decision to fight back under those circumstances, when other Republicans perhaps would not, is emblematic of what Hammer sees as one of his key virtues.

“Trump encapsulates this mentality — a mentality that refuses to be subdued and easily swept away to the proverbial ash heap of history,” Hammer said. “And it is unclear at best if Pence could provide the same.”

The idea that Trump is a bulwark against the excesses of the left, or, as Dreher told me, a “kind of katechon — a force that holds back something much worse,” is a common sentiment among conservative voters, if not among elected members of the Republican Party. While Trump might be, in their view, uncouth, unfair, even immoral and a hindrance to the growth of the conservative movement, they view the left as the real threat, a threat only Trump has seemed able to stand up against.

And to many Trump-supportive conservatives, the impulse to fight on Trump’s behalf against his critics on the left and in the media is intimately tied to their own sense that they themselves are constantly targeted in unfair ways by those same forces.

Ben Shapiro, the popular podcast and radio host told me, “People feel that no honest standard has been applied to conservatives, and they feel that Trump has been targeted just as they have.”

Or as Dreher put it, “At least Donald Trump doesn’t actively hate people like me.”

It’s no wonder, then, that many conservatives, with a wide range of views on Trump as a person, firmly believe that he poses far less of a risk to them than Democrats and the left — forces that Trump seems uniquely able to defeat. In Trump, some see versions of themselves, making them feel both sympathetic to Trump’s plight, and largely unwilling to surrender him to the forces urging on his impeachment — even if, in his place, would come a President Pence.

Trump just made a highly controversial decision about Israel — again
Prolonged school closures could be very costly for America’s students
Campfires, explained
The US just brokered another peace deal for Israel, this time with Sudan
The Supreme Court postponed next week’s arguments due to coronavirus precautions
Hundreds of Trump supporters stormed the Capitol — but few have been arrested so far