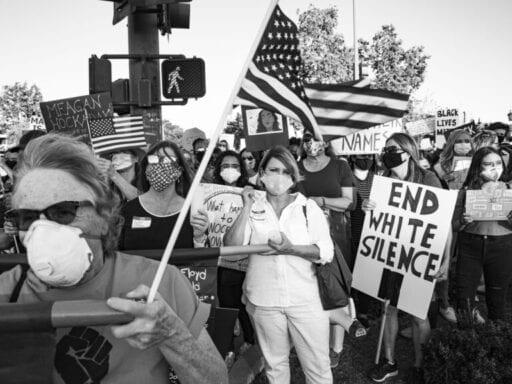 What protests in a conservative enclave of California tell us about a changing America.

Simi Valley is one of the most conservative parts of Southern California.

The city of 125,000, about 40 miles from Los Angeles, is home to the Ronald Reagan Presidential Library. Donald Trump carried the area in 2016, just like Mitt Romney did in 2012 and John McCain in 2008. And it was here, in 1992, that a jury acquitted the police officers charged with beating Rodney King.

But on June 6, several thousand people gathered in Simi Valley to protest the police killings of George Floyd and other Black Americans. The protests were diverse, with people of “every race, every ethnicity, every age group,” including white people, Mikiiya Foster, an organizer of the protests, told Vox.

One older white woman, she said, came with a sign reading, “now you’ve pissed off Granny.”

Indeed, images from the protest tell what may be, for some, a surprising story: one of a majority-white, police-friendly city rising up against racist violence like never before.

Versions of that same story have been playing out time and again this summer, as people in small towns and in traditionally Republican strongholds turn out to protest in unprecedented numbers. And more so than in previous periods of uprising against racism and police violence, many of those protesting have been white, reflecting a larger shift in white public opinion toward skepticism of police and support for Black Lives Matter.

It’s not clear how enduring this support will be, or how much policy change it will drive. As the months go by, some white people who have been supportive of the movement may “feel like they’ve done their part,” Ashley Jardina, a political science professor at Duke University and the author of the book White Identity Politics, told Vox. “Because racism doesn’t affect their day-to-day lives, it becomes salient and less important for them.”

Still, the protests in Simi Valley, and in neighboring suburbs like Thousand Oaks and West Hills, show how much the area — and the movement for racial justice — have changed in recent years. “It’s not just Black people marching for our lives anymore,” Foster said. “It’s time that we all stick together and fight for each other’s lives.”

The June 6 protest started with a tweet. “Protest in Simi,” Foster wrote on May 29, four days after George Floyd was killed in Minneapolis.

Foster, a student bound for UCLA in the fall, only had about 20 followers at that point, she said, so she figured, “it will probably just be me and a few friends standing on the corner.”

But her call for a protest caught the attention of Simi Valley City Councilmember Ruth Luevanos, who helped put her in touch with community organizers. They worked together to get the word out, and just a few days later, somewhere between 2,000 and 3,000 people gathered in the streets of Simi Valley to protest Floyd’s killing and show support for Black Lives Matter.

The crowd was diverse. “It was honestly the most people of color I’ve seen in one space in Simi in my entire life,” Foster said.

But there were also lots of white people, who make up nearly 80 percent of the city’s population; just over 1 percent of residents are Black. Foster’s uncle, who was at the protest, made a comment about the number of white protesters that made Foster laugh: “He said, ‘I never thought I would feel like a minority at a Black Lives Matter protest.’”

For some white demonstrators, this year marked the first time they had been moved to protest for racial justice. “I was always in support of the movement of Black Lives Matter,” Ryan Shultz, a white Simi Valley resident who attended several protests there in June, told Vox. But it was only after the death of George Floyd that he felt he had to be in the streets. “I couldn’t sit idly by and just let this happen,” he said.

Linda Beck Kuban, who’s also white, helped organize a candlelight vigil for Floyd in nearby Thousand Oaks. She said she protested in support of the Equal Rights Amendment in the 1970s, but began paying more attention to racial inequality specifically in recent years, after the uprising in Ferguson and the election of President Trump. “The racism became very overt in the Trump administration,” she said. “Not that it wasn’t there before, it’s never left. But he and his people brought it out, they gave it permission.”

Meanwhile, for Foster, the protest was a big moment in a place where “oftentimes you’re the only person of color in your class.” And Simi Valley isn’t just majority white — it’s also known for its connection to the Los Angeles Police Department. Historically, locals called the city “Copland” because it was home to so many police officers. And in the wake of the Rodney King trial, the city became synonymous in the minds of many with racism, white flight, and “above all, white cops,” Steven Mikulan wrote at LA Weekly in 2002.

Now, the protests show “how much we’re changing,” Foster said, noting that friends who graduated from high school in the city just a few years ago were telling her things like, “I never would’ve imagined anything like that would ever happen in Simi.”

It wasn’t just the June 6 protest; Foster helped organize another protest on Juneteenth that also drew a large crowd. And the city recently had its first Pride event in over 20 years.

White people are turning out to protest around the country. Will it last?

The same thing is happening around the country, as white people in traditionally Republican areas of the country turn out to show their support for Black Lives Matter and their opposition to police violence. For example, a march was organized in Vidor, Texas, a formerly all-white town and stronghold of the Ku Klux Klan, as Texas Monthly reported. Residents in majority-white St. Helens, Oregon, and Harlan, Kentucky, demonstrated as well.

In addition to protesting, white people are expressing more support for Black Lives Matter, more openness to (some) changes to policing, and a greater desire to learn about racism than in years past. But the question for many is whether those attitudes will translate into sustained action. “Part of why a lot of white Americans are turning out to protest is we’re in the midst of a really unusual circumstance,” Jardina said. Because of the pandemic and the resulting lockdowns, a lot of white people “are able to sit at home, and pay attention to news, and think about something bigger than themselves.”

The pandemic is also causing many white Americans to question systems they once took for granted, especially as some have to file for unemployment for the first time or see government loans going to big corporations instead of their own small businesses, Veronica Womack, executive director of the Rural Studies Institute at Georgia College & State University, told Vox.

The events of the past few months, from federal and state governments’ botched handling of the pandemic to the killings of George Floyd and other Black Americans, have many Black people and other people of color saying “we can do better than this,” Womack said. And “we now have white people saying the same thing, and really being able to personally feel it.”

But as the pandemic drags on, attention could drift. Because they’re not confronted with racism every day, white Americans could convince themselves that “the change has happened” and the goals of the protests have been accomplished, Jardina said.

Many wonder whether the white people who protested in Simi Valley in June will still be involved in activism in the fall and beyond. How will they vote in November? And as the larger movement for racial equity continues, what should be the role of the white people around the country who are newly interested in joining the cause?

Shultz, for his part, plans to keep going. “This definitely kind of ignited a spark within me to not only come out to protests for Black Lives Matter but for many other protests that are going on,” he said. And for other white people newly active in this moment, he advises, “it is a marathon, not a sprint.”

“We need to have these conversations, we need to be posting on our social media, talking to our friends, our family, our coworkers, anybody that’ll listen,” he said. “And we need to vote.”

“In terms of how to be the best white ally,” she said, “I think it’s really important to let people of color speak on it and maybe quiet your own voice so that we can amplify ours.”

Todd Bigelow is an editorial photographer with Contact Press Images based in Los Angeles, California. These photos were made June 6 to June 19 in Simi Valley, West Hills, and Thousand Oaks, California.

I went to a huge conference on school safety. No one wanted to talk about gun control.
Iowa Democratic caucuses: We still don’t have the full results
Car-free zones could be the future of cities
New polls show Democrats have a narrow path to a Senate majority
Laura Loomer, the anti-Muslim congressional candidate praised by Trump, explained
We’ve been talking about a national grid for years. It might be time to do it.